posted on Jul, 5 2016 @ 07:46 AM
link
Ladies of the World, I have a question for you all of the fairer gender. It's kind of a 'General Conspiracy', but not really. Maybe it's a 'Rant', but it really isn't. It could go in 'Relationships', but it doesn't seem right there either. In any case, I can't think of a better place to ask this most serious question than right here on ATS. ...

In all my 19,345 days on this planet I have pondered this question (well, there may have been a few where I was just worried about lunch, but anyway). It is an enigma of sorts. Maybe even an enigma within a riddle, I don't know. It's actually an ancient question (at least a hundred years or so) for which I've never heard a credible answer.

So, on to the question of import...

Why is it that the orientation of the Toilet Paper on the roll lacks importance to you? Does it not bother you (too) to have to scratch the wall repeatedly to grab the tissue when the roll is on 'backwards'? Does it not bother you to have to make several attempts to grab even the smallest of fragments? Is it not easier to grab, and unroll, the oh-so-helpful tissue when it is oriented over the top of the roll to the front?

The amount of time it takes to observe the rotational direction of the tissue on the roll before placing it on the axle is negligible, requiring mere seconds. Sure, sometimes people get it wrong initially, but doesn't it drive you absolutely insane to not fix it...IMMEDIATELY...upon discovery??? Doesn't it drive you nuts that a new roll, installed backwards, makes the tissue indistinguishable from the wall it rests against???? Don't you too yank off about 18 FEET more than you need if the TP is fed from under the roles as opposed to over the top??

Doesn't it make you crazy to have to grumble, stand up (with your pants (or pantaloons or whatever you gals wear) around your ankles), turn around and stand there with your butt hanging out to fix the dang roll to even use it????? Surely this must be source of great irritation to you, as it is to us!

Us men, we get the whole seat-up versus seat-down thing...we're learning. But whatever is up with the whole TP roll backwards thing? Is it spite, some devilishly delightful little trick to frustrate us to no end? Do you snicker maniacally to yourselves when installing the roll in this fashion?? Is there some soul gratifying satisfaction in knowing we will curse this method of installation...every...single...time????

I respectfully request your input to this most dire question.

Thanks and best regards,

Eternally Frustrated.
edit on 7/5/2016 by Flyingclaydisk because: (no reason given)

posted on Jul, 5 2016 @ 07:54 AM
link
Well, I ain't a lady, but my opinion is : As long as it's there, I don't care which way it rolls. I'd guess the worst part of TP, is sitting down, doing your business and then realizing you've failed to notice the roller is empty.
Time to do the duck walk over to the cabinet.

In this house it's the guys that put the roll on backwards, just sayin'. And yes, it's annoying

posted on Jul, 5 2016 @ 07:56 AM
link
As sort of a follow-up...in many respects this age old question is kind of like the buttered toast question. The buttered toast will always fall buttered side down, right? So to is the case of gals installing the TP on the roll, 999 times out of 1,000 it will be backwards if installed by the fairer gender. It's like this important little nugget just did not get programmed onto your firmware at birth. Heck, I've even been known to utter words like "YAY!!!" in those rare moments when the TP is installed correctly!

Now granted, replacing the TP is not a man or a woman's job exclusively...but in all fairness, us guys, we get it right!

Sorry, but it's true!

In this house it's the guys that put the roll on backwards, just sayin'. And yes, it's annoying

Guys ALWAYS get it wrong. If you don't you deserve a metal or a beer or something.
Irks me no end. If I'm somewhere other than home and can, I "fix it" because it's just WRONG.

Otherwise, seat up, seat down I don't give a rats $%# either way.
btw I'm female.

posted on Jul, 5 2016 @ 08:11 AM
link
The answer is simple: because men are from Mars and women are from Venus. And Mars rotates in prograde (counter clockwise), but Venus rotates clockwise. There is nothing you can do about this.

This is a refreshing attitude!

I must say it differs from my life experiences though, but refreshing none the less. I would agree there are a lot more girly/metro-men out there these days, and this might account for some of your observations.

Thanks for your reply.

There was a battle waged in the newspapers across the nation when Anne Landers asked this question in her daily syndicated column back in the eighties.
I don't think the issue was ever satisfactorily settled but the subject sparked a lot of responses.

It is just intended to be a tongue n' cheek, fun poking, General Discussion.

(disclaimer for the angry types).

Hence my reference to never having seen a credible answer.

That always perplexed me philosophically. Why does it matter, except for additional floor cleaning , which side lands up. It's going in the garbage either way right?

posted on Jul, 5 2016 @ 08:21 AM
link
I don't care. I'm just grateful when I don't have to yell to a family member to get another roll because all that's in there is the cardboard tube.

No, I cannot stand when the toilet paper is on the wrong way. But I only have to deal with that in public bathrooms- my husband doesn't like the paper to be on a role holder thing. He likes to grab the whole role in his hands.
So we have a little ledge we place it on instead. I've gotten so used to this, I think I prefer it like that too.

Well, more than likely, it's going in the dog's gullet long before it makes it to the trash. One of 'em will snap it up (maybe even before it hits the floor). 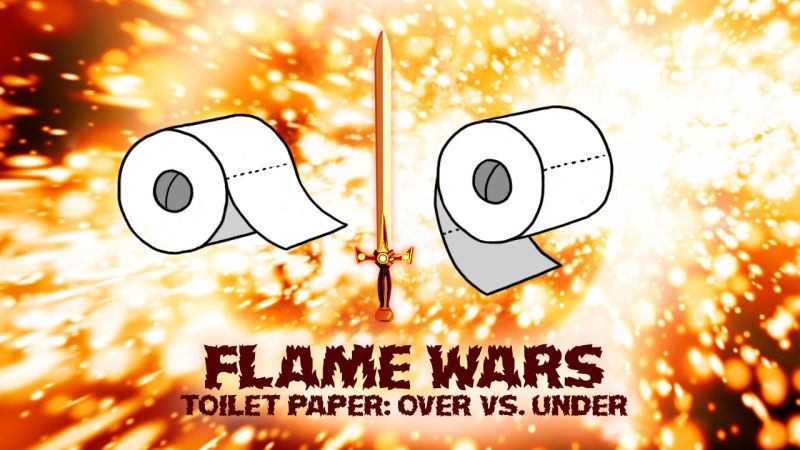 We use the clam shells.

posted on Jul, 5 2016 @ 09:03 AM
link
There isn't a wrong or right way to put the roll. It's all which ever way rolls the easiest and tears the easiest. In my house a new roll if put with the end on top... tears off square by square which is annoying until about an eighth of it is gone and you cant tear it off where you want to with one hand no matter what size the roll is. Placed the opposite way you can always take as much as you want and tear it off where you want with one hand.

posted on Jul, 5 2016 @ 09:16 AM
link
Here's my question: when someone realizes that the toilet paper roll is not installed to their liking, why don't they switch it while they're just sitting there? You can do two things at once, can't you?

On a side note: I, a dreaded female, always install the toilet paper roll with the paper coming over the front. At least I install it. My husband never does - he just grabs a new roll and puts it on top of the toilet tank, leaving it for me to install it properly. Guess he can't do two things at once. Is that a guy thing?