A material which has supposed heat-resisting properties which border on near miraculous, allegedly which could resist the force of 75 Hiroshimas, or could be heated to 10 000 degrees Celsius.

A material invented by a former hairdresser and amateur chemist who ran a small plastics business, and made from (supposedly) everyday materials. A material which could revolutionise fireproofing, space travel, military applications and many other applications, just about anything one can think of which requires a thermal shielding material. 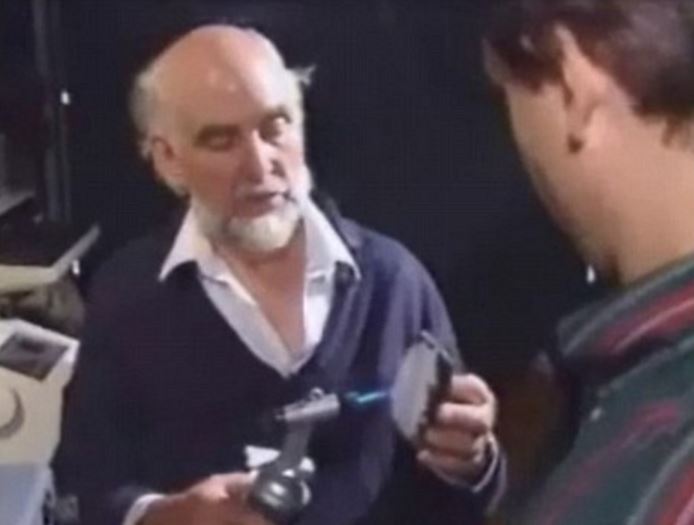 Not the first time this is discussed on ATS, excellent threads about Starlite can be found here and here.

Under tests, Starlite was claimed to be able to withstand attack by a laser beam that could produce a temperature of 10,000 degrees Celsius (Starlite may have reflected part of the beam, however, which would have lowered the temperature). Live demonstrations on Tomorrow's World and BBC Radio 4 showed that Starlite could keep an egg (coated in the material) raw, and cold enough to be picked up with a bare hand, even after five minutes of blowtorch attack. It would also prevent a blowtorch from damaging a human hand.

It feels and looks like nothing much, but holding this nondescript piece of plastic would be, to the world's defence and scientific community, somewhat of a privilege. Starlite, invented by the white-bearded, suited Ward, has been described as astonishing; impossible; miraculous. It has changed assumptions about thermodynamics and physics. It can resist temperatures that would melt diamonds, threefold. 'If it is what it seems,' says Toby Greenbury, a partner at law firm Mischon de Reya and Ward's lawyer for 20 years, 'it will be of enormous benefit to mankind. It's very difficult to think of another invention that is bigger in its implications.' As a fire-retardant, thermal barrier or heat-resistant coating, Starlite could change the world.

So what happened to this material that seems so revolutionary as to have the potential to create an almost fireproof world? Maurice White did not want to give up the controlling interest in his material, and seemed a difficult man to deal with.

On a 1990 episode of the BBC TV show Tomorrow's World, presenter Peter McCann showed off a new plastic named "Starlite" in a rather unusual way: by pointing blowtorches at a pair of eggs. While one egg shattered in seconds, the other stolidly bore the heat, glowing red hot as the flame hit it for minutes on end. More surprisingly, the egg's shell was no more than warm to the touch after the blowtorch was removed, and when cracked open hadn't even begun to cook. This egg was coated with Starlite, a plastic developed by Maurice Ward who was an eccentric former hairdresser from Hartlepool, northern England.

An article in New Scientist describes how Ward negotiated with the British Department of Defence, Boeing, and even NASA but gained a reputation for being impossible to negotiate with, asking for "£1 million one day, then £10 million the next." He was understandably self-conscious that he might be unable to protect his property in court when fighting with some of the world's biggest companies. His belief in the product never diminished, though, with him even approaching BP to suggest that his material couldsolve the Deepwater Horizon crisis.

Ward died in 2011 without ever commercializing or patenting his revolutionary material. He suggested in an interview with Utah-based K-Talk radio that his family might hold the key to this strong, heat-proof and non-toxic plastic, but they've been quiet on their plans ever since his passing.


So why are the family quiet? Was Starlite bought up by the military on the sly and made classified? Does Aerogel bear any resemblance to Starlite?

Having read a recent article on Mr Ward I've decided to leave a brief & factual synopsis of why Mr Ward's product never came to fruition. Mr Ward came to my lab about a year before his death needing help to turn what was essentially a party trick into a useable & commercialy viable product. The problem he had was although the powder component did exactly as it said on the tin, he had found no way of applying a lasting coating. All he really has was some powder mixed with PVA glue, the problem being that although you could apply it to certain objects it's longevity was no more than 2 weeks. While testing we discovered that a sample he'd kept for almost 10 years could be destroyed in a matter of minutes under a methylacetylene-propadiene propane blowtorch. Unfortunately after many samples & tests we where unable to find a effective application method & we parted company on good terms. Sadly this is the true reason why Mr Ward was never able to sell or bring his incomplete product to market. But rest assured, as of this time I can say that there is at least 1 complete & superior product in testing, testing that so far is going remarkably well.

Alternative, was Starlite a hoax?

I don't think it's a hoax, in the sense that I think this guy invented something. But claims mean nothing; anyone can say whatever they want. In the end, this TV-spot is one of few bits of documentation that this thing ever existed. And all I can tell from it is that it's something that'll smoulder when exposed to a blow-torch, which isn't terribly remarkable in itself. (You're also not going to get anywhere near 2,500 degrees with a blow-torch like that! Seriously, that'd be enough to make some metals boil) "75 Hiroshimas" is so misleading it's almost a lie. Maybe the laser beam they used had a light intensity on the order of the flash from Hiroshima or something. But the heat of one Hiroshima is easily enough to vaporize any substance known to man, near ground zero. But even that doesn't say much, without knowing how long the laser pulse is. So it didn't get hot? Well, at most that means that the material doesn't absorb that one wavelength of light the laser has very well.

Will we ever know what happened to Starlite? Has it gone black? Perhaps we will never know, but potentially a real life conspiracy exists.

I want to know how a material which is allegedly so simple to make could not be reverse engineered by those in the military who could see the obvious potential for this material.

I suspect that if it is real it has gone deep black.

posted on Jul, 5 2016 @ 05:27 AM
link
Neat, Perhaps it exist now with other name, probably when he tried to patent it he realized a big company already had a patent on it.

posted on Jul, 5 2016 @ 05:40 AM
link
I'm sure this product.. If indeed a real material, has been either bought up or reverse engineered by some defence department around the world.
I did hear a story years ago pertaining to the former, that it was bought and used in black projects.

It is genuine but there are reason's they do not want it out there, military being one.
Such a material would render many of there weapon's obsolete.
Provide unparalleled protection which is not something that they really want the general public to have access too.
Also they may have and indeed probably have already stolen the material for there own use and have no intention of paying for it or allowing other's to know they are using it.

originally posted by: Misterlondon
I'm sure this product.. If indeed a real material, has been either bought up or reverse engineered by some defence department around the world.
I did hear a story years ago pertaining to the former, that it was bought and used in black projects.

See my old postings on Starlite at the following ATS forum link:
www.abovetopsecret.com...

Our company had done some work on this problem many years ago
when we had a MUCH LESS POWERFUL COMPUTER SYSTEM than
the one we have access to today!

The issues found in our particle simulation to find materials similar
to Starlite that were NOT the same as the high-temperature resistant
coatings and materials coming from the big companies such as
3M (USA) or BASF (Germany) was that a refractory material
similar to kitty litter NEEDS to be present.

In our simulations, the heat holding system needed to
be similar to an Aluminum Oxide (Alumina) ceramic
or carbon-or-silicon composite ceramic
(it can be Poly or monocrystaline structure)
This type of material HOLDS the incoming heat.
Then you need a HEAT TRANSFER AGENT which
can be borosilicate or tetrasilicide or similar
created in nano-sphere form (i.e. tiny balls less
than 0.2mm in diameter) which will TRANSFER
incoming heat to the heat-holding or
heat bouncing layer.

The tiny balls need to be mixed and held within
a resin binder such as silicone or certain phenolic
resins which is then sprayed or painted to the
2nd heat holding layer.

That is what we found.

Maurice Ward (the inventor of starlite)
was a hairdresser who mixed his Starlite
components in a home blender which
means the ingredients he used were
probably hairdressing ingredients such
as Borates, Molybdenum, Silicates, Carbonates,
Chlorides, hair product resin binders, etc. so our
OWN RESEARCH pretty much sums up what we
THINK Starlite could have been made of!

If I did the same particle simulation/thermodynamic simulation
experiments I outlined in my earlier posts but using our today's
AMD S9150 400 GPU cluster, we could probably come up with
a product not yet patented by BASF/3M and would probably
get near 85% to 95% of the claimed performance of Starlite.

My particle system definitions are on the previous Starlite forums!
If you have any AMD Fury-X or NVIDIA CUDA GPU graphics cards
you can do your own particle/thermodynamic simulation at home
which would blow the doors off what we had back in the
early 2010's.

Here is a some Materials Science databases where you can input
starting particle properties data:
www.matweb.com...

properties of many materials and alloys:
www.azom.com...

There's a lot more but this is a good start!

On a personal level I don't think Starlite
is all that novel now simply because of
3M and BASF who have given us some
pretty tough and high-temperature
resistant coatings that are cheap
enough to buy today that a new
version of Starlite would have
to be made an OPEN-SOURCE
material with its formula
given away for free to make
it even worthwhile to look at!