I got myself a nextbook Ares 8 tablet: 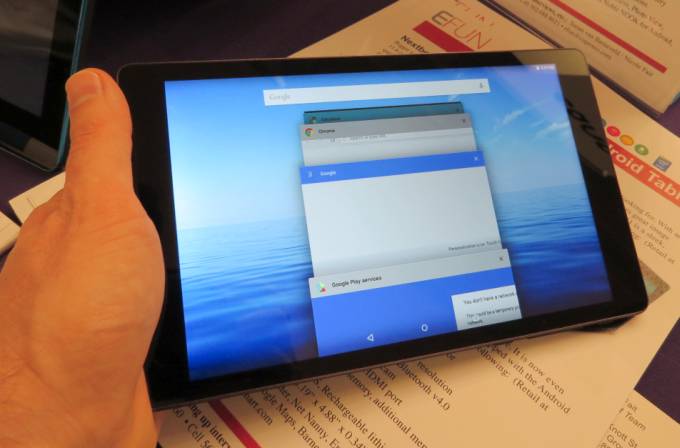 The main reason for the purchase was to play some games when I'm out camping in the woods when I'm kicked back and done with other things you do while camping. I got myself Minecraft Pocket Edition to play on it, and promptly didn't play it, as instead, my son took over the tablet for a while, hehehehe.

Messing around with it, I saw a free game in the Google Play store. Free is always good in my book, and it had something to do with Fallout, which makes it even better!

So I downloaded and started playing Fallout Shelter in which you have to build and maintain a Vaulttec Vault and manage your dwellers.

The game is quite addicting.....my wife, who had never played any Fallout game, immediately became addicted....and once again, I no longer had control over the tablet....hehehe.

Part of the problem of playing games on this Ares 8 is the fact the screen is only 8 inches, and I can't see things! How much better it would be if I could play this game on my PC at home!

Well, I made that happen, but realize that what I did, you don't have to do here soon as the game while only available for Android and iOS systems, is about to be released again for Microsoft Windows sometime this month according to Bethesda (along with a huge update that is adding things to the game).

However, not wanting to wait (hey! it's an ADDICTION man!), I did some research and found that yes, you can play this on your PC. All you have to do is use an Android emulator.

Now, there are several out there. And the most popular one is Bluestacks. However, Bluestacks would not install Fallout Shelter for me.....each time I tried to install it, Google Play would whine about the fact that I was not using a wireless connection (no kidding, my desktop is hooked up with a Cat5 network cable).

However, I was able to make this work with Droid4x. And a little bit of file manipulation.

Droid4x allowed me to get Fallout Shelter installed on my PC, but it did not quite install it all the way. There were some files missing, but I was able to transfer them from my tablet, and presto! Fallout Shelter is working on my desktop computer: 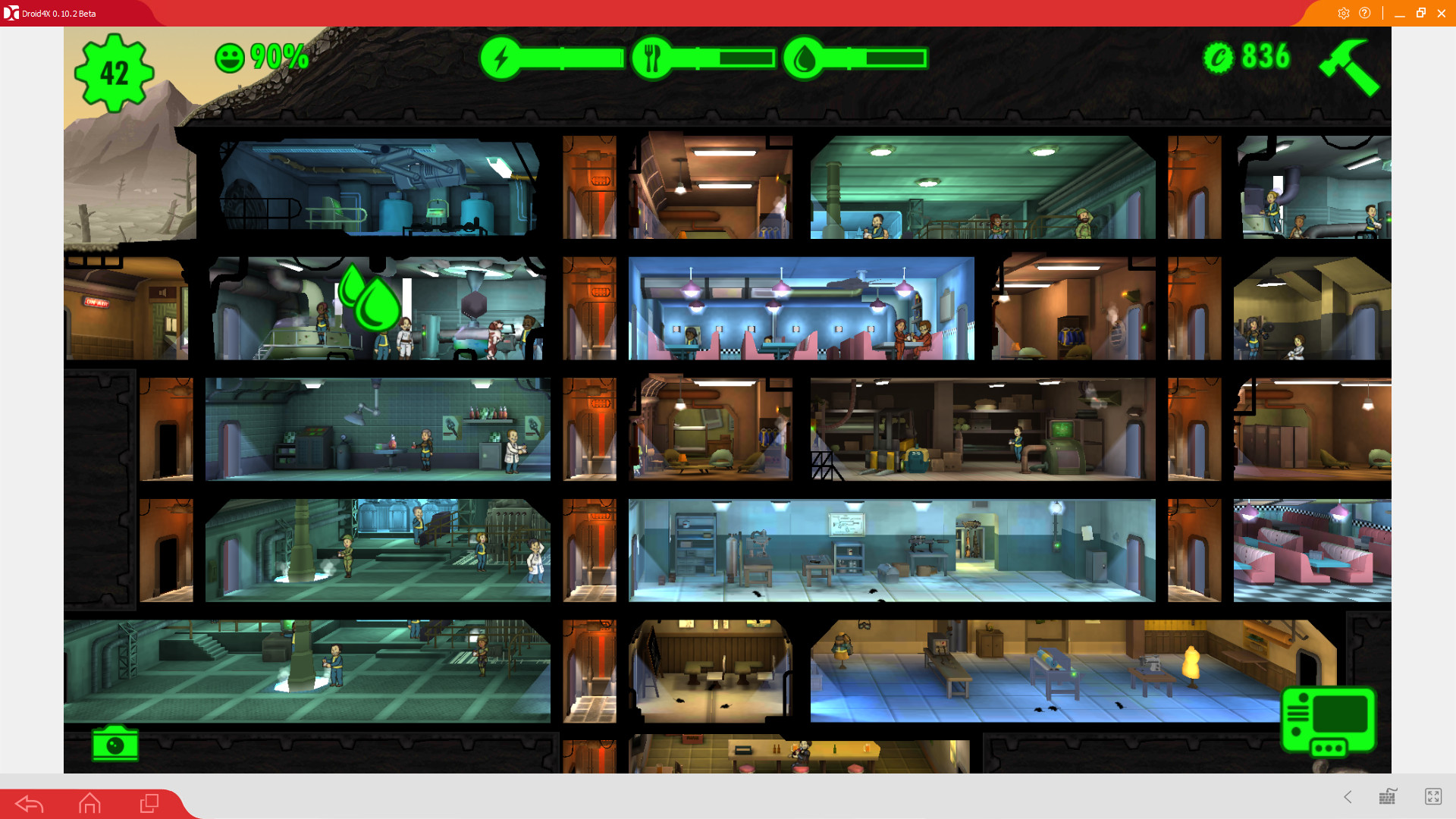 Love being able to see this game on my 22 inch flatscreen monitor instead of the little 8 inch tablet. I can really zoom in and see how my Vault Dwellers are doing: 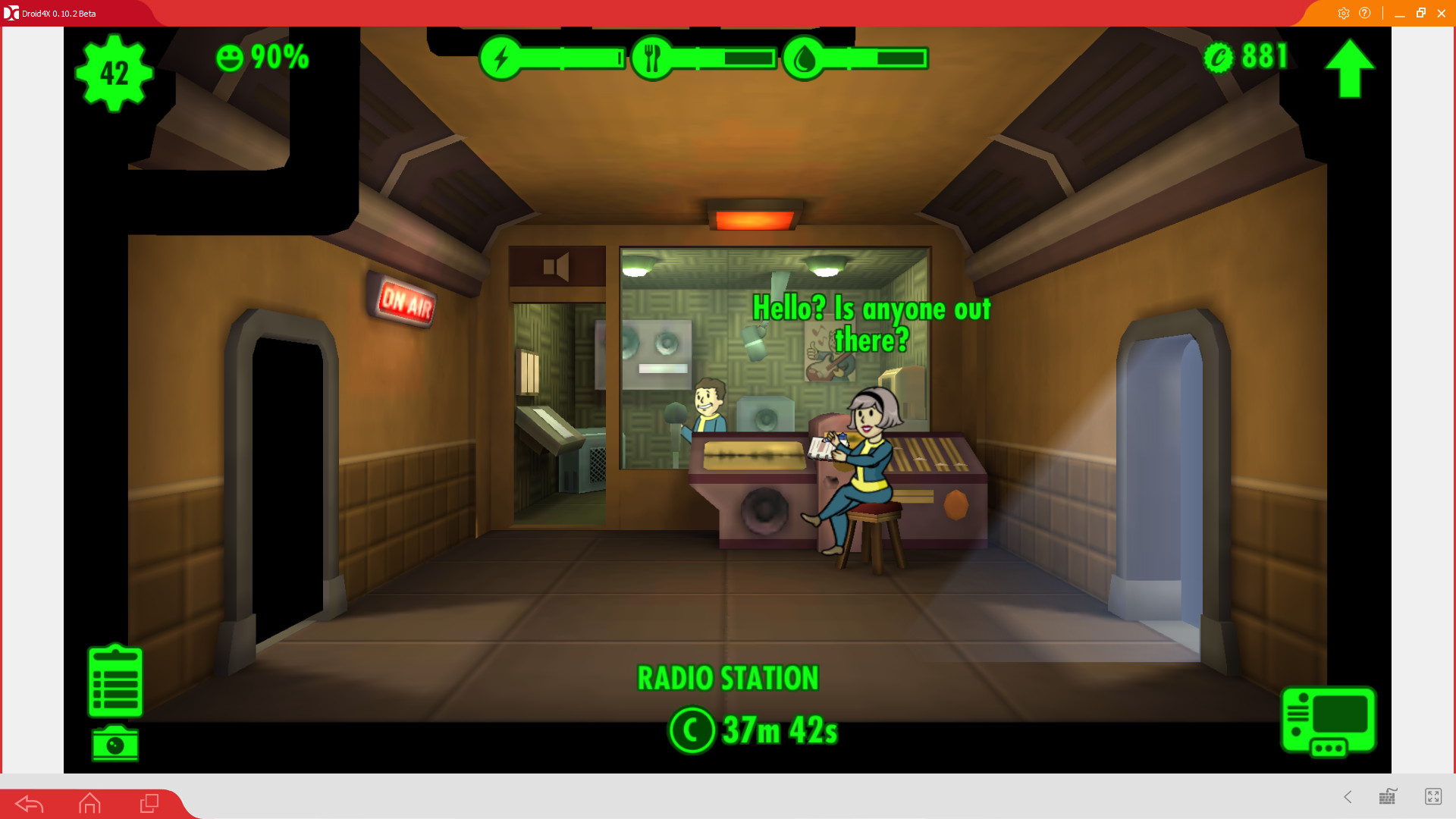 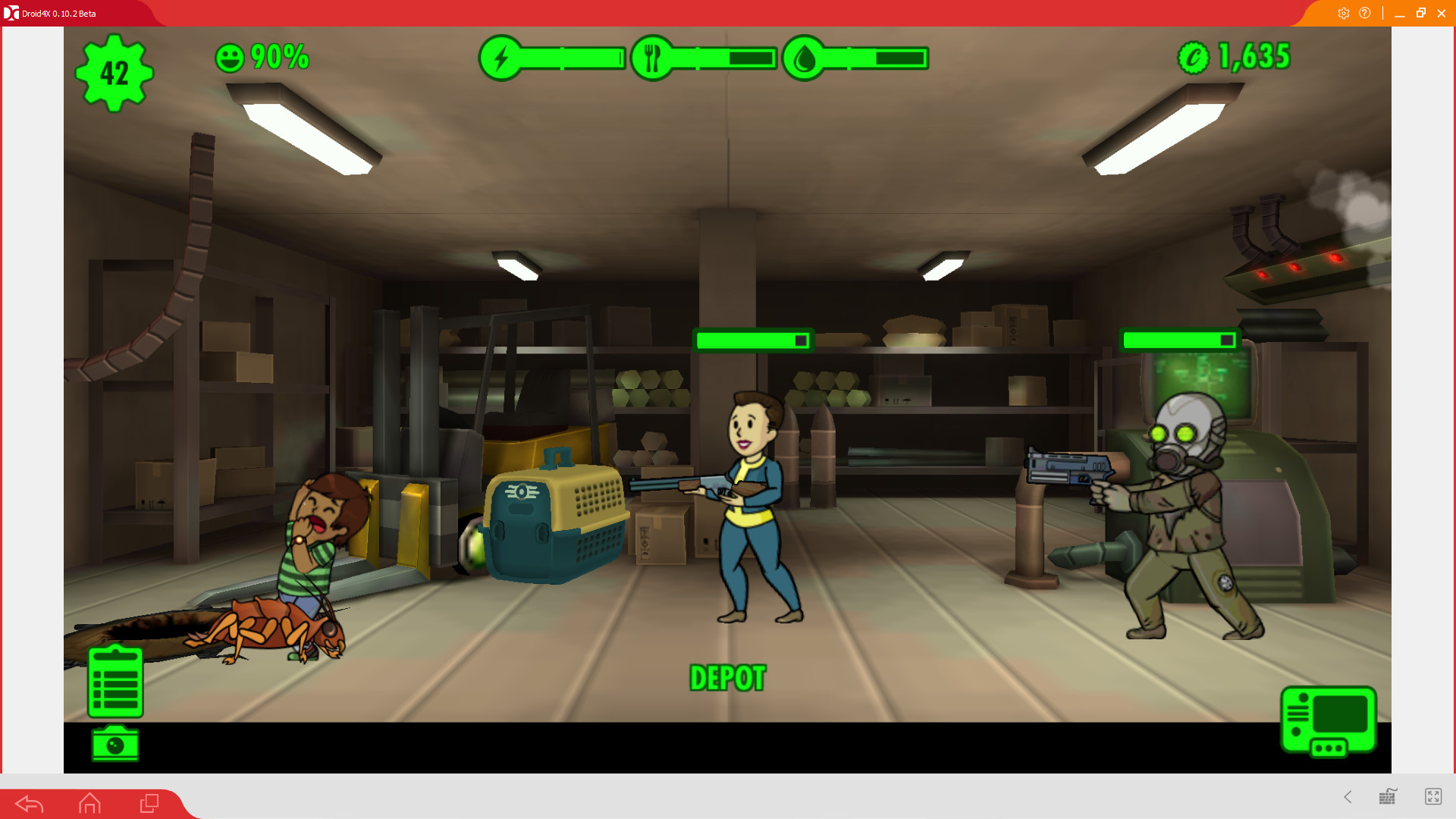 And of course my wife now has this on her desktop computer too! hehehehehe. Not only that: She's now playing Fallout New Vegas with plans to get Fallout 4.

Did I mention I'm addicted to this game?


Never heard of Fallout Shelter. I think I am going to give it a go.
Skip NV . Worst of the series. Go FO3 - FO4

FO3 will not run on her computer now. Not unless I install the Tale of Two Wastelands mod so that FO3 runs under the NV game engine.

I had this problem too with my modern computer and my son Josh also got hit with this.

FO3 was designed to run on single core CPUs. It had no issues with dual core CPUs, but with the newer multicore CPU's it tends to have some serious issues for many of us.

I first discovered this way back when I upgraded my motherboard and CPU to a AMD FX6300 hexa core. Every time I tried to play FO3, it would crash every 5 minutes or so.

After a lot of research I found out what the problem was. My son and wife were still running on dual core computers, and the game ran flawlessly on my son's computer.

Then I upgraded both of them to what I have and BAM! My son couldn't play FO3 anymore.

My 2nd oldest son told me about the TTW mod, so I gave it a try. You have to have both games (FO3 and NV). And it's worked like a champ!

Also too cool that you can have NV stuff in the FO3 world!

Personally I liked NV....love making my own ammo. So in FO4 when I saw you could also build and modify your own weapons and armor I was really excited......only to find I can no longer make my own ammo....awwwww man!

So with one hand Bethesda giveth and with the other they take away! heh.

posted on Jul, 4 2016 @ 08:38 AM
link
a reply to: eriktheawful
Patch for FO3
Fallout3 WinXP-7-8 Multicore Threading 4GB LAA (large address aware) on Nexus Mods
Runs just fine on this rig of mine

Have to take a look at that.

Last time I tried to use a "patch" to fix this issue, it didn't do any good.

And TTW has me spoiled as I get to travel back and forth between FO3 and NV....

posted on Jul, 4 2016 @ 09:37 AM
link
I had a Accident with a Stanley knife a few months ago , cutting through a tendon in my hand , the one for the upward movement of your thumb.

The result was i could not use my entire hand for a good 10 weeks.
The week after my accident i bought a new Phone and downloaded Fallout Shelter , and it was suprisingly fun.

What i really liked was the dept in the micromanagment , to a point i made lists for the training queue to have as many dwellers with all specials maxed out.

It really kept me busy during my recovery , rushing rooms all day and sending out dwellers, at some point i had a income of about 100.000 caps per week.


I wasn't familiar with Bluestack or any of those apps so you could play these games on the PC. I downloaded Bluestack and during the setup there is a question where you can disable the WI-FI option. I set it up and downloaded the game and it works fine!

wow, sorry to hear about your hand! Hope you fully recover!

The update this month is suppose to include new stuff, like being able to do experiments on your Vault Dwellers.

Yah, considering how many are using Bluestack and swear how easy it was to work, I was pretty sure I had messed up something installing it.

See: Bluestack would access my internet just fine, but using Bluestack and Google Play: it kept saying, "Nope, sorry, you do not have wireless to install the game"

Was kind of maddening!

Maybe it's because I played on console, by I LOVED new vegas. Such a deep story line and very malleable to your play style. Even the side quests and exploring all of the little locations and uncovering their mysteries was a blast!

Loved fallout 3 as well. But for whatever reason I just didnt get as "immersed" in the story, so to speak.

originally posted by: seaswine
a reply to: Gothmog

Maybe it's because I played on console, by I LOVED new vegas. Such a deep story line and very malleable to your play style. Even the side quests and exploring all of the little locations and uncovering their mysteries was a blast!

Loved fallout 3 as well. But for whatever reason I just didnt get as "immersed" in the story, so to speak.

1 and 2 are still the best. With the original Wasteland as tops. Where it all started.Wasteland 2 ranks in there also

Agreed, the game is incredibly addictive, but eventually you hit a wall.

200 max settlers. Once you get their levels up and find the most powerful weapons, there's just nothing to do anymore!

Unless they've added to it since it's release??

Next update (is suppose to be this month) will include:

Actual quest for your dwellers.
New places to go explore with your dwellers.
Improved combat system.
New things to combat.
And I think they said they are adding "experiments" to the game, where you do experiments on your dwellers...harkening back to what we saw in FO3, heh.

I had the same crashing problem with Fallout 3 on my newer computer, but there was a setting in the ini file that I changed, that made it recognise the fact that I had more than a single core. It worked perfectly fine from then on!

I was interested in playing Fallout Shelter, but was dismayed because of it being on mobile device only... would much prefer to play it on PC. And now, after reading your thread and learning that indeed I can, I just might go and do so!

They are suppose to be releasing a Windows version of it this month, so you'll be able to play it on your desktop in any case soon.

I had this game for a while, it gets old really quick

but i do like the Fallout shelter logic vids you posted

posted on Jul, 7 2016 @ 06:25 PM
link
Due to your post I became interested in this game. I was not aware that there was Android emulators.
OK so after trying to use Droid 4x and Bluestacks I finally found a em that would run smoothly. It's call Nox player.

It ran fine up to yesterday, now I cant log into google play or google settings in nox player. Google will not sync either now with nox player.

My question to you is are you also seeing these errors with your em or are you experiencing any problems with google apps?
Thanks.
Thanks for the post and any help or response in advance.

No, I'm afraid I don't get these. I had a pop up for Droid wanting to update, and I let it do it, but I've never had the issues you're talking about. I'm really sorry.

posted on Jul, 13 2016 @ 01:32 PM
link
Fallout Shelter is updating! I'm hoping this is all the new stuff they talked about coming out this month! Yay!

Also: Fallout 4 - the Vault-Tec DLC....which looks like a 3D version of Fallout Shelter, will be released on 26 July.