posted on Jul, 4 2016 @ 01:21 AM
link
I've mentioned the idea where Hillary becomes the escape goat for the Dems and because the alternative of Trump is unacceptable to the Dems, Uncle Joe and the old wise Obama "do the right thing" and nominate Biden with a VP such as Sanders, throwing Hillary under the bus.

Ok, it's not that far-fetched and deserves consideration on ATS. I looked over the predictit.com site, and Biden is trading at roughly 20:1. Not a bad bet at this moment, in my mind, but I went ahead and read the discussion there on the subject and it was pretty interesting.

Apparently Trump has mentioned Biden being drafted out of Dem desperation.

Biden's website is still hosted live, but blank, not 404'ed

Ok now that I'm googleing it, people have been talking about this for a while...


I'll open it up for discussion. I am pretty surprised I haven't seen this covered on ATS. If it has, I apologize.


Well, actually it is pretty far fetched. I don't think it's inconceivable to think something might change at the last minute and Hillary won't actually be the nominee but it almost certainly will not be Biden.

But (for example) there is no reason at all why Michelle Obama couldn't run. If Hillary can, Michelle Obama can. And believe me, even the thought of it freaks me out. But she has been political enough and has enough inertia that she would get a ton of support.

This is one reason why I don't complain too much about Hillary. Hopefully she (and the Democrats) ultimately loses but better Hillary than someone much worse.


Hillary has been tied with, or ahead of Trump in every poll thus far. No need for "desperate" measures. NYET.

The Democrat's answer to Dan Quayle...just no.


This is one reason why I don't complain too much about Hillary. Hopefully she (and the Democrats) ultimately loses but better Hillary than someone much worse.


Who's worse than Hillary? Her husband signed NAFTA that started the outsourcing of American jobs which ultimately led to our ridiculous dependence on communist China for everything from toilet paper and lightbulbs to essential parts of every car on the road (and everything in between). She said she would be continuing bill's economic policies (the only thing she said that I believe).

I don't know if anyone noticed, but Obama's been getting into a pissing contest with Putin, which is a horrible idea, and who's his secretary of state? Yup. Hillary has said on numerous occasions that she supports regime change in Syria. It's pretty obvious Putin is against that. She will most certainly continue destabilizing the Middle East. The best thing we can hope for from this situation is that it only escalate into Cold War II instead of World War III.

At this point, the only thing Trump has going for him is that he's so unlikeable that Congress is unlikely to cooperate with him. Hillary is a Washington insider. While her little pet projects, the bones she throws to the people may not pass Congress, the insidious, damaging, business as usual legislation will certainly pass. She's the candidate most likely to start WW3 AND the most likely candidate to tank the economy, granted, it may take a decade to see the damage, like last time.

This whole election is a joke. A political system based on voting for the lesser of 2 evils has produced an election cycle composed of James Bond villains. I sincerely hope Americans have learned something from all this.

originally posted by: Metallicus
a reply to: FlyingFox

The Democrat's answer to Dan Quayle...just no.

The Democrats answer to Jerry Lewis or the 3 Stooges. 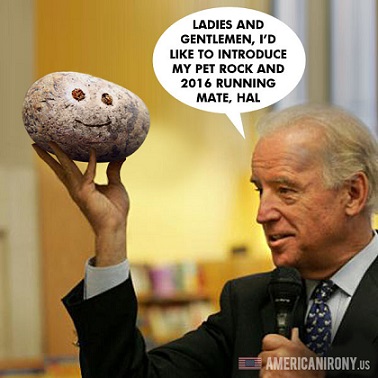 And they call him creepy Joe .... laaaaa laaa

posted on Jul, 4 2016 @ 10:08 AM
link
It would be tough considering that Biden is really just as gaff prone as Donald and can be as nasty. Did you watch the debate with him and Ryan at all? It was basically a debate where Biden behaved much like a less orange version of The Donald. And if I remember right, the left thought is was great and that Biden "pwnd" him.

Far be it for me to point out such things.

Who's worse than Hillary?

This whole election is a joke.

I agree with you there. I don't bother to vote because I know it doesn't do a damn bit of good.
edit on 4-7-2016 by BrianFlanders because: (no reason given)