A Demon in the forest 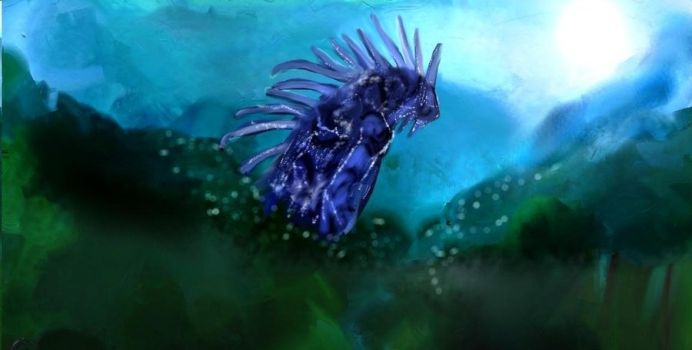 The Northern Kingdoms never had a demon running around its grand forests. The Gods of the north struck down every attempt when the demons tried to cross their borders..
One day in a time far away a demon went a stray and walked over the borders to the Northern Kingdoms. The Gods didnt look that way, so he passed peacefully trough and became human like everyone else.. And the demons they didnt notice someone was gone missing..

It had no place among the stars above, its only place was its mother, whom he called by her name,;" Gaia ". She took care of him, and whispered in his demon ear; " I love you. "

Then one day, the demon screamed in pain.. The world went silent, with all the sides looking at each other.. ;" Something is very wrong" They said. The Human tried to keep his demon inside, his mother was hurting.. The more the Human like demon tried to keep the monster inside, the worse it became..

The Gods of the North took notice and the demons acted and saw that someone was missing.. They came running on steeds, unicorns, dragons and monsters this world has never seen. Asking;" Where is he!? " But furthermore they wanted to capture the him, and well, both sides lost lives.. The demon acted with instincts, it had awakened, it defended its human and his mother..

The Gods of the north gently approached;" Please dont run, we can offer you a place " Yet the demon ran, and The northern Gods looked in despair.. He didnt take the bait..
The demons approached and asked;" where do you want to be " The demon pointed at the Grand green forest and said ;" Home " The demons pointed at the big city lights;" You dont want this? " One of the demons with a crown gently said..

The demon looked at the big city lights and turned his head to the forest and said yet again;" Home "
So the Demons made him a Wooden throne, and said;" Then this is your kingdom ".
edit on 2016629 by tikbalang because: image