Seems it somehow lost its luster and color for the American Flag.

The cartoon style logo show a flag flying on the White House, but it's a white flag.

Older logos had the American Flag in red-white & blue.

Maybe they just wanted to "simplify" the logo.

Maybe there's an agenda in play ?

Some other oddities are in this logo as well.

other odds and ends:
Why Are There Errors in the White House Logo, and How Did They Get There?

The White House doesn't publicize changes to its brand identity. But something fishy has been going on with its logo over the past decade, according to a design agency that worked on refresh ideas for the famous mark several years ago.

The story starts in 2009, when New York-based digital design agency Hello Monday was invited to submit ideas for a redesign of the White House logo. Naturally, the agency, which had only recently opened its doors, was thrilled. It quickly dove into the history of the logo—and of the iconic north face of the White House more broadly, which the logo depicts. 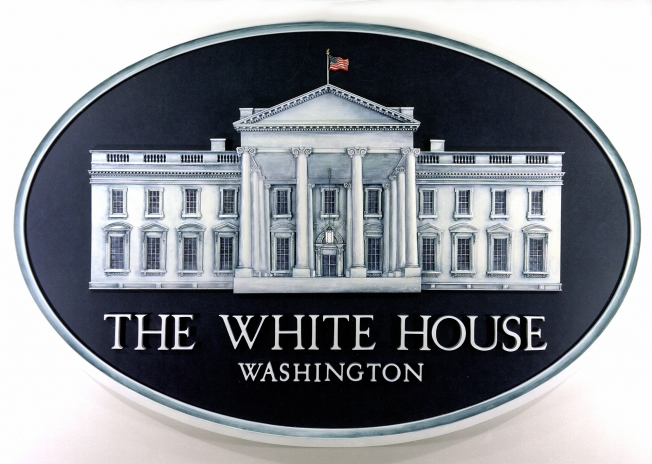 Obama's revision of the WH logo. 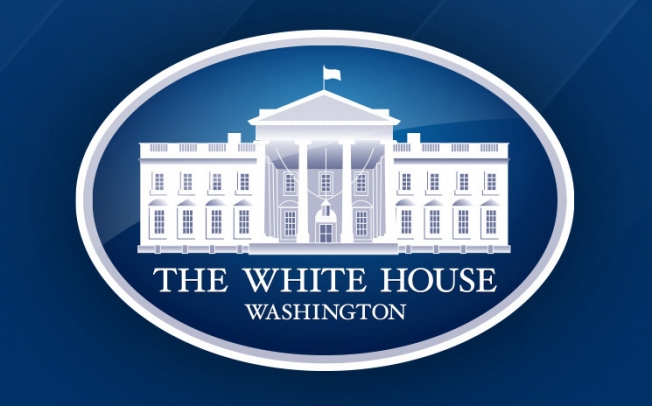 Why is the American flag missing/replaced?

Maybe they just wanted to "simplify" the logo.

You think? Skeuomorphic design has been supplanted by flat, clean design without all the textures, gradients, shadows, etc. It's a ubiquitous trend, here are some examples: iOS, Windows 8 & 10, websites, mobile apps, etc. Also, it says so right in the AdWeek link:

We decided to clean it up and create two versions: a more streamlined version that kept the important details minus the triangle over the window, and a simplified version for digital use. We also optimized the kerning and tracking of the logotype

What's ironic is that the AdWeek article mentions an error where one of the window pediments (ffs people, things have names) is a triangle instead of a crescent shape (if you look, they alternate on the sides) which led some people to think that it was supposed to represent a pyramid and therefore a big wink wink to the Illuminati.

People are dumb. I don't know what else there's to be said.
edit on 2016-6-27 by theantediluvian because: (no reason given)

I see this as one more of Obama's little F.U.to America and it's people.

I'm so sick and tired of people like you being right all the damned time.

originally posted by: Metallicus
a reply to: xuenchen

Also, anyone voting against him was, by default, a racist, a bigot and probably liked to kick cats and run over squirrels.

Why fly the flag of a country you don't give a sh** about. I see this as one more of Obama's little F.U.to America and it's people. Now, let's hear all the excuses his fans are going to come up with.

Who needs excuses for whatever this is supposed to be? If there's any excuses to be made, it's by you for saying the that crap I just quoted.

None of this should matter.

As Michelle Obama pointed out (in between vacations using Air Force One... and the second Air Force One when she wanted to see the sights in South America).... the White House was built by slaves..... so... you know.
(Know what? I have no idea.)

Obama's revision of the WH logo.

Why is the American flag missing/replaced?

Why does the architecture above the bottom right-side windows not mirror those on the left side?
... as it does on the original image?

Also, anyone voting against him was, by default, a racist, a bigot and probably liked to kick cats and run over squirrels.

But but but I thought there was a "silent majority" of Americans who have mostly "conservative" views?

posted on Jun, 27 2016 @ 07:49 PM
link
Don't laugh its happening all over the world, more and more foreign born bastards running countries...we had Julia Gillard who was born in Wales and then Tony Abbott who was born in London run the Country as Prime Ministers. Now we have this guy Mathias Cormann the Minister for Finance who was born in Belgium for goodness sake and Mike Nahan from Yankland who is our minister for finance and Energy in my home state WA.

Its globalism and its bad.

All in favor of flying a white flag on the White House say "I".

originally posted by: Metallicus
a reply to: xuenchen


Because of the larger number of non-educated voters in this country. (and Romney).You know , the ones that cant state the 3 branches of the Federal Government . Much less what they are there for.And the test that a legal immigrant takes to become a citizen would be impossible. As I stated in another thread "good thing they were grandfathered in" if you know what I mean.
I think I have answered that one. On to the next.
Peace
edit on 6/27/16 by Gothmog because: (no reason given)

That's a nod to the Reptilians clearly.

Or a half ass graphic artist lacking an eye for detail.

posted on Jun, 27 2016 @ 07:51 PM
link
a reply to: xuenchen
This thread is more meaningless clutter and space for conservatives to whine about nothing.

posted on Jun, 27 2016 @ 07:52 PM
link
It never ceases to amaze me the stretches people will go to so that they can find a reason to complain about Obama.

An obviously simplified and less detailed logo with two primary colors where using the full colored flag would make no sense in the scheme of the design but hey it is now "Obama's revision of the WH logo" . Does anyone really doubt that is the White House and having any common sense questioning what flag that is on top? Do you have the same concern for military patches of the American flag that are not in color or does that not apply because its not Obama?

Literally Obama could walk out and say the "sky is blue" and people would be pointing to that as an indication that he killed all the dinosaurs and caused every Mandela Effect in the history of the world because he is a Sith lord.

originally posted by: eluryh22Also, anyone voting against him was, by default, a racist, a bigot and probably liked to kick cats and run over squirrels.

originally posted by: onequestion
He's the anti patriot and he's our president.

Whine that anyone who you disagree with calls you names like "racist" and then call anyone who disagrees with you an "anti patriot."

Get out of here with all that rational thought you anti-patriot!