Meet the Donald Trump Our Media Is Hiding


The ceaseless, escalating character assassination of Donald Trump is unprecedented in its magnitude. How he continues to slog through the neck-deep ‘Bravo Sierra’ is beginning to seem superhuman – miraculous, if you will. They don’t call him ‘Teflon Don’ for nothing. If the miserable, soulless presstitute media bothered to spend a tenth of their energy exposing the many felonies and high crimes of Hillary Clinton or Barack Obama, perhaps it would be the Democratic party imploding, rather than the Republicans.

It seems an appropriate time to recognize some of Mr. Trump’s generosity – and at times, heroism – from decades past, long before he was a ‘racist, fascist, Hitlerian’ presidential candidate and likely GOP nominee. Given that he is known to carry out many of his altruistic deeds in a discreet manner (like walking into the kitchen of his restaurant and quietly handing each cook and busboy a $100 bill), it is likely that this tiny collection of excerpts do his legacy little justice.

We should begin with a stunning montage compiled by the End the Fed Facebook page. It has been viewed over 5 million times in less than 72 hours at the time of this writing.

“All of a sudden, a big long limousine pulls up on an angle, and Donald Trump pops out with the blond, too,” the witness said. “There was a guy with a bat, hitting a guy over the head, and Trump yelled, ‘Put that bat down. What are you doing?’ The guy dropped the bat, came over and started talking to him.”

Donald Trump was traveling along a New Jersey highway when the limo in which he was traveling experienced a flat tire. Spotting the disabled car along the side of the road, a passing motorist stopped to offer his assistance. After helping, Trump asked how he could repay the good samaritan. The man asked that Trump send his wife a bouquet of flowers. Trump agreed.

True to his word, the bouquet arrived several weeks later along with a note saying, “We’ve paid off your mortgage.”

“Orthodox Child with Rare Ailment is Rescued Aboard Tycoon’s Jet”

The private Boeing 727 of real estate tycoon Donald Trump arrived from Los Angeles at LaGuardia Airport Tuesday morning, carrying aboard an Orthodox Jewish child with a rare and still undiagnosed breathing illness. The child, Andrew Ten, age 3, arrived with his parents — accompanied by three nurses who attend to him around the clock — to try to seek medical help in the New York area.

Trump made his plane available for the special trip to New York after the boy’s parents, Judy and Harold Ten, called Trump and told him of their plight.

Commercial airlines refused to fly the child because he could not travel without an elaborate life-support system, which includes a portable oxygen tank, a suction machine, a breathing bag and an adrenaline syringe.

“Mr. Trump did not hesitate when we called him up. He said ‘yes, I’ll send my plane out,’” 29-year-old Harold Ten recalled shortly after he landed here Tuesday morning.

Asked why he thought Trump made his private jet available, Ten replied, “Because he is a good man. He has three children of his own and he knows what being a parent is all about.”

Donald Trump doesn’t just have the golden touch for business – he also has a heart of gold.

The real-estate mogul has been housing Jennifer Hudson and some of her relatives at the Trump International Hotel & Tower free of charge. Hudson has been seeking refuge at the Trump holding since her mother, brother and nephew were murdered in Chicago on Oct. 24.

“She’s a great girl. And we’re protecting them well. They are very safe.” – Trump

Now I don't really trust anyone running for president, but Trump has to be far better than the other option. A little more at the link.

ksiezyc
+6 more
posted on Jun, 25 2016 @ 07:49 PM
link
a reply to: iTruthSeeker
Beautiful. Hope people see this instead of listening to the mainstream media.

around text quoted from another site, hit the cloud icon above the post window. A mod will come slap you if you don't.
edit on 6/25/2016 by Kali74 because: (no reason given)

originally posted by: Kali74
a reply to: iTruthSeeker

around text quoted from another site, hit the cloud icon above the post window. A mod will come slap you if you don't.


Thank you! I didn't know this or how to.

originally posted by: breakingbs
a reply to: smurfy 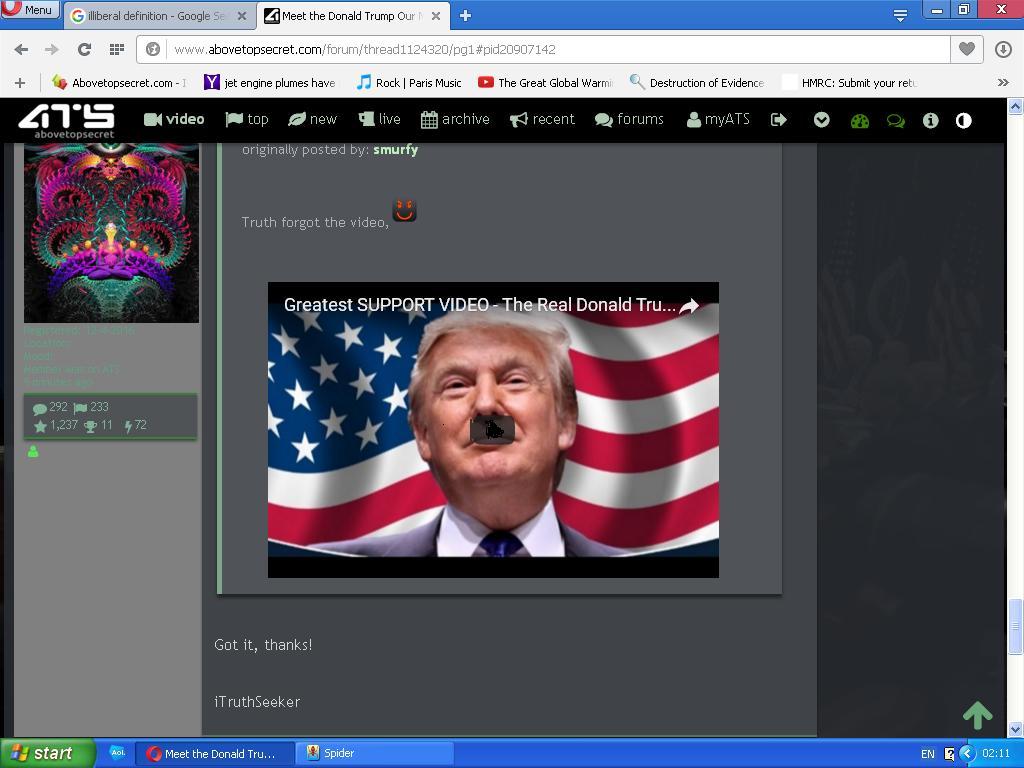 posted on Jun, 25 2016 @ 08:28 PM
link
a reply to: iTruthSeeker
I officially finished(sort of) reading those stories. Holy hell, I was voting for him before, but my respect for him is ever greater, though I have known of his kindness.

He is a good man. My wife and daughter may be fortunate enough to be in a charity event with him in Indiana somewhat soon with a state rep friend of mine.

He IS a good man

Point of clarity aimed at your cited blog - no one calls Trump 'Teflon Don'. That name is firmly held by the mobster John Gotti. Also a New Yorker. Shame on the blog writer Dan Lyman for royally screwing that up. Pure sloppiness.
edit on 25-6-2016 by Jason88 because: A pro-Trump piece inadvertently goes negative in the first paragraph

Honestly,iTruthSeeker,I'm surprised that anything positive about Mr. Trump is allowed to be posted on ATS.

Thank you for the breath of fresh air.

Regardless of political opinions, helping people out like he did is great. He may or may not have ulterior motives when doing these deeds, but that doesn't matter. If someone paid off my mortgage or saved my son's life, I really wouldn't care why. A good deed is a good deed. S&F for enlightenment.

Who the hell calls Donald Trump the Teflon Don? That was John Gotti, and only John Gotti.