Who is voting for Clinton? I have yet to meet 1 supporter!

posted on Jun, 24 2016 @ 01:00 PM
link
As this election starts ramping up, i sit back and think who is supporting this witch? While she was in my hometown of Buffalo NY during the new york primaries, she filled a small venue with mostly old women. By filled, i mean 20-30 people in the pierce arrow museum.
Trump is filling venues up to 20k supporters. Sanders was doing the same. Clinton has trouble filling a bingo hall. so... i ask myself, how is she doing so well in the polls, who is voting for her and why. This is mu conclusion:

Sanders was supported by the millenials - 18-30 years old. Hillary is getting the votes of Seniors 45 years and up.
Trump seems to be getting the middle... 25-45 year olds fed up with politicians in general.
I have paid close attention to the democratic exit polls. They all were way off to the actual voting.Of course, sanders numbers were always much higher in exit polls. We are all aware of the voter fraud and thanks to the recent DNC data breaches, we all know the DNC has been plotting Hillary as far back as May 2015.
I have yet to meet 1 person who was planning on voting for hillary. There are no lawn signs in all of western new york, there are no bumper stickers, no shirts, hats, nothing!

so where are they? is it because that the average voter tends to be over 45?
i have not seen any support from anyone on facebook besides washington post. so are these elderly voters not on social media? is that the issue? maybe they dont know what hillary has done?
ask yourself, if you had no social media, no facebook, twitter, no snapchat instagram, no ATS... how would you know how crooked this witch is?

My question is, where are all her supporters hiding? or are the elite, TPTB, the DNC, are they all in on this? are they pushing for her to be president to fulfill their evil agendas?
ask yourself, do you know any hillary supporters? have you seen a bumper sticker or a lawn sign?
are there any hillary backers on ats?

I can only think of one, but T&C says I can't name em.

I think they're quiet and don't display/talk about their support. They don't put up signs or bumper stickers. They don't post about it online or share anything about Clinton on their social media accounts.

I get the feeling they're middle-aged and older people that feel comforted by a familiar name and don't feel the need to broadcast or justify their opinions.

The MSM is controlling the polls and the propaganda.

posted on Jun, 24 2016 @ 01:05 PM
link
I know one person that I work with who supports her. Wouldn't matter if Hillary killed his family, he's still vote for her. I haven't been able to determine why.


well you know, all those dead people and illegal immigrants need to be counted too. vote early and vote often.

> <
They are right there between the arrows above.

I have yet to see one.
I have seen a whole lot of Bernie and Trump signs and stickers.

originally posted by: Krazysh0t
a reply to: nobunaga

This is spot on.

posted on Jun, 24 2016 @ 01:20 PM
link
I think most of the left voters are still quietly hoping something will happen and Bernie will somehow get the nomination. They were so close to open socialism they could smell it. They're going to hang on to the bitter end as long as there's a glimmer of hope anywhere to be found.

posted on Jun, 24 2016 @ 01:23 PM
link
My mother is voting for Hillary based only on the fact that Hillary is a woman. Other than her, I've seen exactly *one* Hillary Clinton car sticker.

I think you need to distinguish between Hillary "supporters" and likely Hillary voters. I know very few (maybe 4) supporters of Hillary, but I do know quite a lot of people that will be voting for her. Most of them say that they don't really like or trust her, but they are willing to vote for her because they absolutely want to stop Trump from becoming president.

posted on Jun, 24 2016 @ 01:25 PM
link
trust me, i have looked far and wide. i have spoken with family, friends, co workers, random people who approach me with my trump hat.
i drive all over buffalo ny on a daily basis. lots of trump support, and people are proud to show their support. one street i went down i counted 13 trump signs in april.
i have 1200 friends on facebook. i would think 1 supporter would be in there. none whatsoever.
New York is a known democratic strong hold, yet all the dems that i know supported bernie, and most said they wont be voting at all because its like voting for dumb and dumber.
i get it... trump has said alot of dumb stuff, he has been bashed by the media and the term rascist is all i hear. people have been conditioned to think that about trump, those are the sheeple.
but still have yet to come face to face with a clinton supporter. dont get me wrong, i know they are out there, but they do not make themselves known, or do not choose to show their support.
HOW IS THIS CORRUPT, FOUL MOUTHED, EVIL, IGNORANT, SELF ABSORBED, EGOTISTICAL, DISGUSTING EXCUSE FOR A HUMAN BEING LEADING THE POLLS FOR LEADERSHIP OF THIS GREAT COUNTRY!
i
do
not
get
it

I can't speak to age breakouts very well; don't have the opportunity to interact with the Millennials; the Anglo elderly I do talk too seem to support Trump, but I think that's to be expected. I've observed that at least half of the 18~45 age group where we live are stoners and have no interest whatsoever in voting. The rest of that demographic has either moved out for better jobs and/or education, or are hard at work in family enterprises and keep very much to themselves.

I can report absolutely no yard signs whatsoever making me wonder if, as far as this area is concerned, this may be a very low turnout election. The only other observation I'd make is that, I don't know about New York State, but in the Western part of Texas its considered impolite to bring up the topics of Religiion or Politics in public with strangers. And as well "groups" here are pretty much socially segregated by ethnicity and/or religion and don't talk much with people outside their "group".

posted on Jun, 24 2016 @ 01:29 PM
link
That's cause you fall for lies. I bet you even think there is a liberal msm. funny thing is the media is owned by rich conservatives. Liberal media. Republicans lie hand over fist and when the media points it out it's because they are liberal.

Well your description was nicer than anything I could have come up with. Mind if I borrow that?

originally posted by: SM2
a reply to: nobunaga


well you know, all those dead people and illegal immigrants need to be counted too. vote early and vote often.

Florists always get extra graveside delivery orders a week before an election.

originally posted by: Krazysh0t
a reply to: nobunaga

This is THE most accurate description I have seen in a long time.

I didn't vote for Clinton in the primary but I will be voting for her in the general election. Perhaps you could share a few of these exit polls that reflect significantly different results than that of the voting because I've been following pretty closely and I haven't seen what you're speaking about.

I personally know quite a few people who have been supporting Hillary all along. They tend to be middle aged and older, moderate and were also supporters of Bill Clinton.

It's pretty clear that you've got some issues with your perceptions:

While she was in my hometown of Buffalo NY during the new york primaries, she filled a small venue with mostly old women. By filled, i mean 20-30 people in the pierce arrow museum.

According to WGRZ, the crowd at the Buffalo Transportation Pierce Arrow Museum was 1,500 people. Here's a still from the video at the link: 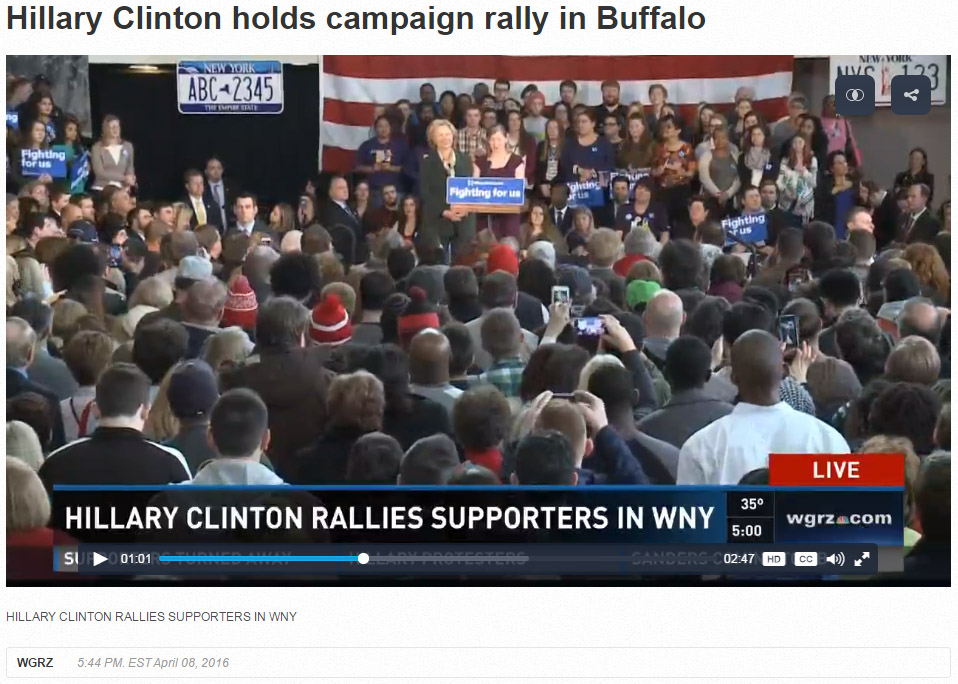 According to the WGRZ reporter, the venue was filled to capacity.

This begs the question what game you're playing. Either you're ignorant or you're deliberately lying but in either case, you're spreading misinformation.