Donald Trump's newly released fundraising figures proved so anemic that Republican operatives are still shaking their heads and rubbing their eyes to make sure they read the numbers correctly.

The presumptive Republican nominee — who frequently boasts about his vast personal fortune — reported a paltry $1.3 million cash on hand Monday evening, a total not even in the same ballpark as Hillary Clinton’s $42.5 million.

"It's low for a Senate race, much less a presidential race," said Republican pollster Whit Ayres, who formerly worked for Sen. Marco Rubio.

"I have a state Senate client that has more in the bank," said another GOP operative formerly aligned with Rubio’s campaign. The number was "almost so low that it's not even comprehendible."

So what is going on?


It's not going to inspire donors to invest and most importantly for donors is that Donald is still holding out the possibility of using their donor money to pay back his loans to the campaign,"

Several Republicans argued that it's unlikely that the GOP donor class is unlikely to make a mad rush to close the money gap between Clinton and Trump since there's still a strong distaste for Trump among some donors.

A former bundler for Jeb Bush was even more direct about his disinterest in helping Trump.

"This is a guy who lent himself $30 or $40 million so chuckleheads and suckers like me would go and raise money for him and then pay himself back. This is a total fraud. He's a fraud," the former Bush bundler said, referring to the fact that Trump loaned his campaign the cash and could still repay himself.

Interesting situation..Donors were told he doesn't need them...and he loaned himself 30 Million vs. actually betting it on himself..

Now that he apparently needs the Donors money...they suspect he is just looking to recoup his "loan" at their expense.

Personally? I think Trump is unable to self-fund. I think he wont release his tax returns because they show he is losing money, not making it...And his campaign has been unable to explain how he has qualified for a tax credit (two years in a row now) for those making less than 500k annually.

It will be interesting to see what happens if an the actual GOP Nominee runs out of money before the general election.

Self-funding is all he has left...no one is going to give him money just so he can pay himself back...and after he derided the Donor Class as everything that was wrong in DC and built a campaign on claiming he didn't need their money.

Where is his money? Isn't it time he actually pony up like he said he would?

Trump is a first in a lot of ways.

Now is when he should be spending and he has no money to spend!

He is getting slammed in the swing states...
Swing-state polls: Trump slipping in Florida, Ohio
www.politico.com...

posted on Jun, 21 2016 @ 06:48 PM
link
Most of his fortune is tied to his properties. He is worth billions but it's not liquid. I do think he has enough in cash to fund it but he won't. No real business person would ever consider it. I'm not even sure why he needs all the cash anyway. Hillary is in a lot of trouble. He really should just sit back and watch the show. FBI, Russians, She can fend off Trump but this is a whole other level of heat.

How in the hell people support this con man is beyond me but I guess a Trump supporter is born every minute.
edit on 21-6-2016 by Swills because: (no reason given)


introvert
+9 more
posted on Jun, 21 2016 @ 06:52 PM
link
Clown cars are not that expensive. Either the GOP and the PACs will pony up the money or they will forfeit the race to Hillary.

Sad state they seem to have have put themselves in. 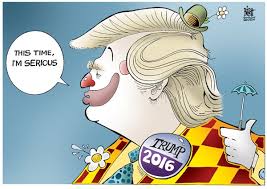 Anyways, the GOP either gets behind Trump and raise the 1+ billion that they helped raise for Romney, or say bye-bye to the integrity of their garbage party
edit on 21-6-2016 by VivreLibre because: (no reason given)

posted on Jun, 21 2016 @ 06:59 PM
link
He'll be fine. Only thing that is consistent about him is that people consistently underestimate him to a fault. Her, she has been fighting to get this bag of rocks off her back since day one and can't do it. It's still there and getting heavier and heavier with the Russians adding even more to it. She has tried to side step the landmines but there are just too many at this point.

Are you kidding me?

From the horses mouth.

She has equally said things that are way beyond false. I'm not defending him either, he said self fund and that is not the case for the most part...who knows, maybe he starts spending his own coin more but right now just two frauds going at each other. I'm going with the one not under a Federal Criminal Investigation. Seems like the obvious choice for lesser of the two evils.
edit on 21-6-2016 by LifeMode because: typo


Now , is that speaking against Trump ? Or perhaps the State Senator ?
You got to look at this deeper.Perhaps prodding Trump to accept "bribes" ?

posted on Jun, 21 2016 @ 07:08 PM
link
In the primaries Trump won, even though he spent a great deal less than other candidates.
He spent around 300 million less than Hillary, and also almost 100 million less than Bush, Rubio and Cruz EACH.
He could win the general election without spending as much as Hillary.
Trump spends smarter.

How much money is behind each campaign?

That was the primaries. This has been discussed over and over on these forums. Trump has always left it open that he would probably need to fund-raise for the general election.

During primaries, Trump was representing himself, and running on his own. Once the Republican party names him as their candidate, he is no longer running as himself, he is running as the party representative. That is totally different.

General election fundraising affects the entire party. Funds collected not only go for the presidential campaigns, it is also used for other party members. Trump will not be able to totally refuse to fund raise without alienating the party. That is why he does not NEED to do it. If he does it, it is for the benefit of the party.

There are ZERO reasons for someone like Donald to be POTUS. He ISNT a compassionate man. He ISNT a political man. He is a greedy salesman who LIKES money and the FINER things in life.

He is the ULTIMATE capitalist....

WHATEVER makes him more money...he supports.

Being President would not make him MONEY. I think is ego has blinded him....

He would rather spend OTHER people's money, and declare bankruptcy for his own campaign...

....before actually paying for it HIMSELF [not a loan].

originally posted by: Swills
a reply to: Indigo5

How in the hell people support this con man is beyond me but I guess a Trump supporter is born every minute.


I'm going to have to completely agree with you, a fraud is a fraud.


Are you kidding me?

originally posted by: VivreLibre
He never said he was going to self fund it

Anyways, the GOP either gets behind Trump and raise the 1+ billion that they helped raise for Romney, or say bye-bye to the integrity of their garbage party

I was confused when you said She, I though you meant Trump somehow but then I realized you're talking about Clinton. Look, she is god awful, bought and paid for by Wall Street and wealthy "donors" but this thread isn't about her.

Soooo, how much money has he made?

He did so well in the primaries because of one thing, the MSM's non stop coverage of his antics. That worked during the primary season but won't likely work in the general election because Trump is going to continue to depend on Free MSM coverage but more importantly, the support of Independants and anyone else who isn't voting for Clinton.

So far, by polls, looks like Trump is losing that battle tremendously!

Are you his accountant? How do you know other than he says so? Really. He said it it has to be true?