As the article states, the AR-15 is the most talked about gun in America. There is a stigma attached to it’s name and the term “assault weapon” has now become synonymous when describing it to those without complete knowledge of what the term means.

Now deceased, the rifle's inventor and his supposed feelings towards the popularity of his creation are being channeled through the surviving members of his family. They have decided to remain quiet until now, specifically reaching out to MSNBC to comment. Hmm...

"Our father, Eugene Stoner, designed the AR-15 and subsequent M-16 as a military weapon to give our soldiers an advantage over the AK-47," the Stoner family told NBC News late Wednesday. "He died long before any mass shootings occurred. But, we do think he would have been horrified and sickened as anyone, if not more by these events."

Eugene’s surviving children and grandchildren contacted the media after the recent atrocity in Orlando to discus what they feel Eugene believed was the original intended purpose of his creation. Thankfully (at the time), there was no expectation of policy change or legal ramifications discussed regarding the ownership of the rifle.

Their comments add unprecedented context to their father's creation, shedding new light on his intentions and adding firepower to the effort to ban weapons like the AR-15. The comments could also bolster a groundbreaking new lawsuit, which argues that the weapon is a tool of war — never intended for civilians.

Eugene Stoner would have agreed, his family said.


The inventor was an ex-Marine, avid sportsman, hunter and skeet shooter. He never used the rifle for sport or home defense and ironically never owned one. The millions he made from it’s design were all from military sales.

"After many conversations with him, we feel his intent was that he designed it as a military rifle," his family said, explaining that Stoner was focused on making the most efficient and superior rifle possible for the military."


The family stated: "What has happened, good or bad, since his patents have expired is a result of our free market system." Well, markets don’t exist unless there is demand for such a product. The more freedoms we lose by those in control, the more the people's desire will grow for protection from such entities.

Personally, I think the AR-15 is a great choice for home defense, though not entirely necessary. What makes them indispensable, is our right as humans to meet any and all opposition with comparable force, especially after our government decides that they no longer hold an oath to the American people. If you think this will never happen, understand that until the government is in 100% control, it's people will always and should remain a threat.

"Currently, a more interesting question is 'Who now is benefiting from the manufacturing and sales of AR-15s, and for what uses?"

While the family is not looking to politicize the exchange, their words will indirectly help strengthen the arguments of those looking to capitalize on the recent tragedy in Orlando. Nothing like two scoops of sentiment to fortify the propaganda we’re being fed by those who wish to disarm us.

I would ignore the inventor’s true intention for the AR-15 by realizing that the rifle has easily taken more lives in the hands of our military than all mass shootings in the world combined. As long as the government remains an ever encroaching threat to our liberty, we must remain armed and vigilant. We must preserve our ability to retaliate with as much force that can potentially be used against us. Period.

The AR is functionally the same as any other semi-automatic rifle.

Some of its features and accessories have been demonized by the anti-2A crowd.

Lets be honest, the governments of the world have taken countless more lives than any group of civilians.

If anything, theyre the ones who should be regulated.

... then the journalists left the interview and he laughed with an evil tinge while counting his blood money haha

posted on Jun, 16 2016 @ 11:05 AM
link
At the time that the AR15 was invented, the most popular rifle in the US was the M-1. Which was the weapon that the previous generation carried into battle against the Japanese and the Germans. To think that the AR-15 wouldn't have a similar popularity after nearly a half century of military use makes no sense.

They don't want to make a political statement?? Then why speak to a reporter about it?

I"m guessing Eugene would have been more disgusted by how his offspring have been PLAYED like a bunch of bitches.

What's next, is his family going to dig up his corpse and take it to political fundraisers and rally's.

posted on Jun, 16 2016 @ 11:12 AM
link
I honestly don't know how you, OP, can say that his kids aren't trying to be political. What other reason could they have for saying what they're saying, when they're saying it? Perhaps they didn't outright call for banning it, but they stopped just short of it.

"Died long before any mass shootings." 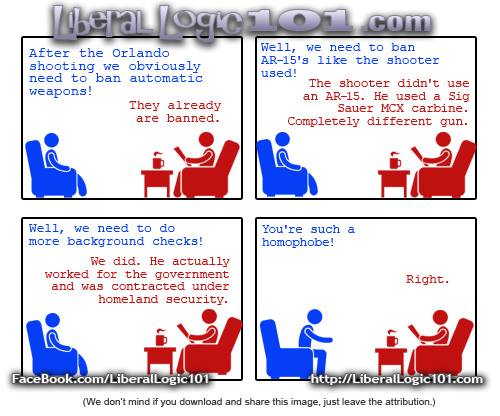 posted on Jun, 16 2016 @ 11:19 AM
link
If he wouldn't like to see it used by civilians, then my guess is that the inventor of the AR-15 wouldn't be too happy to see it being used against civilians either. There is no Constitutional right for the government to bear arms, so there should be no legal hassle ban assault weapons for the police and military.

posted on Jun, 16 2016 @ 11:24 AM
link
The reason us civilians are guaranteed the RIGHT to bear arms in the second amendment is so WE can wage war against our government if they fall out of line and become tyranical. So actually it is every US citizens not Right But duty to wage war against tyranny period. This "the inventor of the AR-15 would be horrified for civilians having access to them" sentiment is propaganda plain and simple.

I honestly don't know how you, OP, can say that his kids aren't trying to be political.


It can easily be labelled as such, but nothing political was discussed.

They requested individual anonymity in order to speak freely about such a sensitive topic. They also stopped short of policy prescriptions or legal opinions.


If the family is not directly making acute political statements or demands, they have certainly put a log on the fire. They aren't campaigning or seeking direct action, though politicians that do will more than likely use their sentiments to support their own agenda.

I don't see how their opinions could be used in any lawsuit.

Their opinions of what the inventor may have thought are as irrelevant as his opinion would be.

But more importantly, are hearsay and not admissable in court.

posted on Jun, 16 2016 @ 11:30 AM
link
a reply to: eisegesis
He invented what he hoped was a better weapons platform than the AK47.... and his family thinks that he would be horrified and sickened that it is used to kill people?

Well, it is nice of them to speak for him, since he is long dead.

How about if I talk to him now?
Yo, Eugene.... your rifle can kill people.

Now, I will divine his answer from the netherworld....
'No crap, dude!'

posted on Jun, 16 2016 @ 12:05 PM
link
I'm glad that people are seeing this for what it is. Eugene may have held a different opinion about his government now than he did before he passed. His family speaking for him in today's political climate does nothing but echo how he may have felt decades ago.

As times have changed, so has the enemy. You want to learn about homegrown terrorism? Ask the FBI. Ask our "enemies" how many innocent people have died to bring "stability" to a region left to their own. I don't remember Islam being such an issue in America until we began slaughtering them in their own land.

posted on Jun, 16 2016 @ 12:24 PM
link
Wouldn't go as far as saying better than an AK but the M16 was an improvement over a stick, good for checking for mines and holding up your laundry.

posted on Jun, 16 2016 @ 12:26 PM
link
Eugene Stoner was, in his time, a genius. His work in the 1950s and 60's revolutionized the way the guys in the military fought war. He came up with light weight weapons that made the US infantry more deadly. The AR-15, the XM-177 and the M-60 where brain children of Stoner. These weapons allow the infantryman to carry more ammunition and carry a lighter load while in combat.

The weapons (AR-15) that gives the anti-gun people heartburn is only visually similar and doesn't have the same abilities as the original M-15/16. The commercially available rifle is not able to fire 700 bullet per minute as stated by Florida congress Grayson. Most of the information being said in this gun grab is "disinformation". You are fed copious amounts of false facts to make you fear guns.

I've owned the Sig 556 and the only real difference is that the Sig operates with a gas piston as opposed to a direct impingement system. In the end it gets less dirty and is easier to adjust the has flow of it does get a little nasty during heavy use. Aside from that, it's virtually the same as an AR. It just works better and stays cleaner longer. I still kick myself for getting rid of it. It was hands down my favorite rifle I've ever carried.