[Video] Cop sentenced to 4 years for tazing teen into a coma. 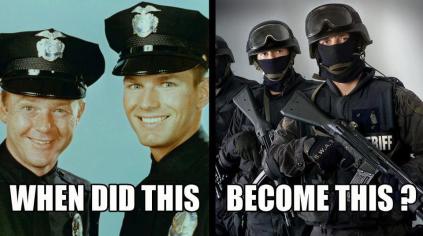 A former Missouri police officer who deployed a stun gun on a teen until the boy suffered a cardiac arrest was sentenced Wednesday to four years in prison, officials said.

Timothy Runnels pleaded guilty last fall to violating the constitutional rights of then-17-year-old Bryce Masters during the September 2014 traffic stop in the Kansas City suburb of Independence, according to the U.S. Department of Justice.

His plea deal also required him to admit he deprived the minor of his civil rights and injured him when he dropped the handcuffed teen face-first on to the ground, the feds said.

I linked the video offsite.

Its not so much graphic as it is disturbing.

I feel like the teen was taking his cues from any one of those "am I being detained" videos.

But its my understanding that if the cop says "yes", at that point I think youre supposed to comply.

Am always reminded of this Half Life 2 video...

Wow ... that was brutal. Just dropped him on his face with his hands cuffed behind his back. The cop got 4 years. The kid's offed up for the rest of his life.

OMG...he drags the kid, when he can't move, tells him to stand up and drops him face first on the ground.

Most normal police would say a short sentence as to why they want you out of the car or what a person is suspected of doing.

The kid should have locked the door and called 911 for more police. But it;s a little late now.

It's actually, if you are in your car, you can't just drive away once they say you are under arrest. You have the right to ask why? To ask for a supervisor to come.
edit on 10-6-2016 by reldra because: (no reason given)


For once, the cop who diod violate the constitution is punished.
edit on 10-6-2016 by reldra because: (no reason given)

posted on Jun, 10 2016 @ 06:24 PM
link
This case isn't about whether or not the teen should of complied, of course he should of, he's a teen and the other guy is a cop. So lets start off by saying the teen was acting stupid and well..... Like a teen.

What this is about is a blatant abuse of power, overstepping of bounds and egregious use excessive force which sadly is becoming the norm. When viewed in this respect the video and actions of that cop become all the more vile and heinous.

It's not "a few bad apples" anymore, it's a new North American epidemic and it should scare the hell out of all of us because the reality is that any of us could find our children or even ourselves on the receiving end of this gestapo like brutality.
edit on 10-6-2016 by Helious because: (no reason given)

originally posted by: Sargeras
a reply to: gladtobehere

BS, he will be sent to some candyass detention center in Arizona with a pool and vollyball court, then have his sentence cut in half for good behavior.

originally posted by: Shamrock6
Slow on the draw