posted on Jun, 10 2016 @ 06:01 PM
link
I placed this thread in the US Political Madness forum specifically because it is true. It is hypocritical madness that the political elite (who are surrounded by people with guns) would draft and try to enforce a Department of Justice regulation dubbed “Operation Choke Point” with the express intent to infringe upon the constitutional rights of its citizens. Citizens, that have not broken any laws...and are selling LEGAL items. Even the name, "Choke Point" reveals the true target of this unconstitutional regulation.

"I was aware of Operation Choke Point and that it was intended to make it impossible for people with a fraudulent business to do banking,” Lichterman said. “But I sell firearms, which is constitutionally protected, and am licensed by the federal government to sell firearms.”

Imagine that, trying to "choke" off a business that the federal government itself has provided a FFL license (which is not easy to get or free). The fact that in one hand the federal government has sanctioned this business, in accordance with constitutional law, while the other hand tries to shut it down is appalling. No, "they" are not trying to take away the guns I hear constantly.

“The greatest impact, of course, will be felt by small business owners, who will have to scratch and claw to survive,” Malcolm said. “If fraud is what the government wants to stop, then it should investigate and target practices that are actually fraudulent, not practices it finds legal-but-distasteful.”

Good news is that because he stood up to this unconstitutional regulation, the bank backed down. But how many that did not were put out of business silently?

Kelsey Harkness, a journalist with The Daily Signal who broke the story on the controversial DOJ program’s impact on firearms dealers, said despite the Obama administration’s repeated attempts to keep Operation Choke Point under wraps, Americans continue to find out about it when legally-operating small business owners are caught in the crossfire. “The only reason Luke Lichterman was able to get his account back was because he went public with his story — it makes you wonder how many other innocent business owners are being victimized by this secretive government program without even knowing it," Harkness said.

Vigilance, constant vigilance is required by the citizens of this country. Otherwise, we will find ourselves in dire straits, and no place to turn for real justice.

The bank made an error in trying to use the regulation in a way that it cannot be used. Congrats to this man for standing up for himself and his business.

With all due respect, I disagree that it is not about the federal government. It is a federal government regulation, When the government OWN guidance to banks on the categorization of "risky" businesses it clearly identified ammunition and gun sales as some of the targets of this regulation. 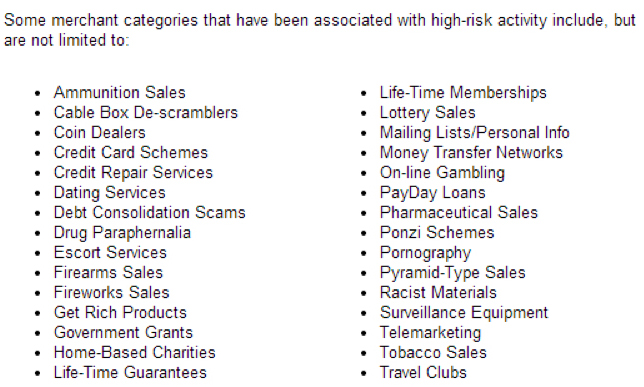 So, if these businesses are listed in their guidance training, then how can it be a "side-effect" or "unintended consequence"?

How can you honestly say it is not about a big bad government?

Please don't confuse me with someone who is pro federal government overreach. I am merely pointing out that this specific example was not targeted by the federal government but rather by his bank, and that everything was sorted out.
edit on 6/10/2016 by TycoonBarnaby because: typo

originally posted by: Krakatoa
a reply to: xuenchen

I think he knows ALL about it.

Notice how he has done things like this many times.

The object of the game is to do as much damage as possible in a short time span.

But he forgets how dumb he ends up looking.

I fail to see the connection of this post to the topic. To me, it seems like a non-sequitur. Could you please elaborate a bit more on your thoughts when you wrote that?

Thanks
edit on 6/10/2016 by Krakatoa because: mandela effect

These businesses include lawful firearms dealers, payday lenders, escort services and other companies. The Washington Post noted that while the Justice Department cut off financial services to certain industries, it encouraged banks to provide services to others like illegal marijuana sales. Read more: dailycaller.com...

Operation choke point. Hence the name CHOKE THE LIFE out of something/someone.

Since out right bans haven't worked.

Make it so NO ONE can sell firearms.