posted on Jun, 9 2016 @ 11:13 AM
link
Bernie Sanders is meeting with high officials in Washington today.

He will also meet with Obama himself.

Speculation is they will try to convince Bernie to end his campaign.

Sanders has vowed to keep going and attempt to get a contested convention in July.

His point might be to sway those "Super" delegates to his side because he is polling better against Trump than Hillary is.

Should he stay or should he go is the question?

Will Obama "force" him to quit is another question.

What do Sanders supporters think?

U.S. Senator Bernie Sanders returned to Washington for high-level talks on Thursday, including a meeting with President Barack Obama, as Democrats pressured him to end his presidential campaign and support Hillary Clinton after a hard-fought primary race.

Clinton, the former secretary of state, won enough delegates to secure the Democratic nomination this week and become the first woman to lead a major U.S. party as its presidential nominee.

Despite her commanding victories in California and New Jersey in presidential contests on Tuesday, Sanders vowed to carry his populist campaign to the Democratic National Convention in July, when the party's nominee is formally chosen.

posted on Jun, 9 2016 @ 11:29 AM
link
I think Bernie is fighting the good fight. I think he should be concentrating on the V.P. role at this point because he makes Hillary better. He's put Hillary on her heels and forces her to be on point. Her presidency will be better for it.

originally posted by: Ohanka
Don't give in Bernie. Don't listen to their lies. Keep going, fight the DC Establishment.

I hope Bernie gets the nomination, I hope its a contested convention and I hope he gets to continue to run. I also hope that even if he doesn't get it, that he turns around and runs independently. I'm not even a fan of his, but HE is better than Hillary.

I honestly don't like anyone running, and I feel forced to choose the lesser of evils. I have defended both Trump and Bernie, ( mostly Trump) but honestly at this point I don't know who I will vote for, I just know who I will not be voting for.

That will turn a lot of Sanders supporters to Trump or a 3rd party nominee.

MSNBC saying Sanders will back Hillary.

Slap in the face bigtime.

Either way, the hardcore Sanders fans are going to have to vote for the establishment Democrat nominee if they don't want Trump to be elected. Anyone who is hardcore Sanders fan shouldn't in good conscious be able to vote for, or give away their vote to Donald Trump. They may not LIKE Hillary, but they'd be going against everything they stand for to allow Trump to be elected.

posted on Jun, 9 2016 @ 12:29 PM
link
Wonder if any Bilderberger representatives are their today?

If Bernie drops out of the race there will be a tremendous amount of voters who will flip trump.

Sorry but Bernie has to stay in. In fact they are getting their complacent views stuck on it being Hillary Vs trump. When in reality it is trump Vs Bernie Vs Hillary. And in a poll between those 3? Trump edges out. The DNC should go Bernie because we are going to write in his name on our ballots. Call it a wasted vote some more. We will call your campaign a waste of American lives, Hillary.

They need Bernie to stay in. They'd be foolish to make him surrender.
edit on 692016 by GiulXainx because: Hillary crooktin.

Hardcore Sanders don't like Hillary either they won't vote or they will eventually vote Trump, at least that's what I've been hearing from them.

Then they aren't bring true to themselves. Trump stands for against the things they believe in. It's petty and childish, immature and selfish to compromise their moral integrity like that.

posted on Jun, 9 2016 @ 01:03 PM
link
For the past six months my wife has been a full fledged support of Sanders. I asked what happens if it's Hillary. "OMG, I would never vote for her, I'll just write in Bernie."

Two days ago out at dinner. Out of the blue she starts talking. She never really talks about politics unless I bring it up. But it was like she was just thinking out loud while we waited for the food. In the space of 5 minutes she convinced herself that voting for Hillary is the right thing to do.

It is her right and I support it. My point is, people won't just automatically not vote for Hillary. I think you will find a lot of Bernie supporters talking themselves into and voting for Hillary on the Tuesday. I firmly believe she will be the next POTUS.

Well believe it or not Trump being anti trade deal and wanting to renegotiate our position within that context is very pro helping the working class.

In my opinion Hillary is far worse than Trump. At least Trump is the guy behind the scenes Hillary is the dirty paid for pro trade deal politician.

Funny I keep hearing Jill Stein of the Green Party is a favorite with Sanders supporters?

She was quite popular when I was at our local caucus too!

And I have heard talk of Gary Johson, not much talk of going to Trump though.

We need some real leadership ready to step to the plate and someone who won't back down from these globalist.

For sure we need to renegotiate these trade deals and stop taxing our manufacturers out of business.

Who's the only person talking about this that has the real quality of leadership that it takes to accomplish that?

Leadership requires ownership and I only see one candidate owning anything and thats Trump. He doesn't back down he owns what he says and he's a strong leader with solid negotiation skills and the understanding of what leverage is and how to use it to improve our economic situation globally. 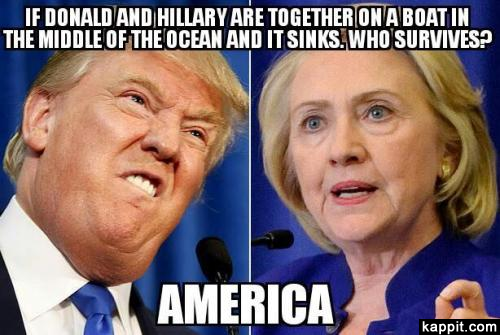 Funny meme but Trump is the only person running who displays any real leadership qualities everyone else is parroting what they believe from what is written on a piece of paper by other people they pay to write them down.

Trump speaks from his own mind not a piece of paper.

posted on Jun, 9 2016 @ 02:44 PM
link
This is the part where Bernie gets offered either Vice President or another high level cabinet position.