posted on Jun, 8 2016 @ 12:38 AM
link
I just came across this a few minutes ago on my feed and I'm still digesting it and pondering the implications myself but it's very interesting and I thought I'd share.

Researchers from a number of universities, funded by the NSF's Office of Polar Programs Arctic Social Sciences, have published a paper in the Journal of Archaeological Science detailing the discovery and analysis of metal artifacts found in Inuit dwellings at Cape Espenberg on the Seward Peninsula in northwestern Alaska.

Here's what they found:

"This is not a surprise based on oral history and other archaeological finds, and it was just a matter of time before we had a good example of Eurasian metal that had been traded," said H. Kory Cooper, an associate professor of anthropology, who led the artifacts' metallurgical analysis. "We believe these smelted alloys were made somewhere in Eurasia and traded to Siberia and then traded across the Bering Strait to ancestral Inuits people, also known as Thule culture, in Alaska. Locally available metal in parts of the Arctic, such as native metal, copper and meteoritic and telluric iron were used by ancient Inuit people for tools and to sometimes indicate status. Two of the Cape Espenberg items that were found - a bead and a buckle -- are heavily leaded bronze artifacts. Both are from a house at the site dating to the Late Prehistoric Period, around 1100-1300 AD, which is before sustained European contact in the late 18th century."

Metal artifacts are rarely found because they were usually used until they were worn down and, therefore, not well preserved at field sites.

"These items are remarkable due to curation and preservation issues," Cooper said.

The cylindrical bead and a fragment of a small buckle strap-guide are composed of leaded bronze, which is an alloy of copper, tin and lead. The fragmented leather strap on the buckle provided radiocarbon dating, and the item was dated to 500-800 years old, although the metal could be older.

"The belt buckle also is considered an industrial product and is an unprecedented find for this time," Cooper said. "It resembles a buckle used as part of a horse harness that would have been used in north-central China during the first six centuries before the Common Era."

I'll hunt for pictures and other sources and update the thread.

Image of the buckle after it was excavated in 2011 from University of Colorado. 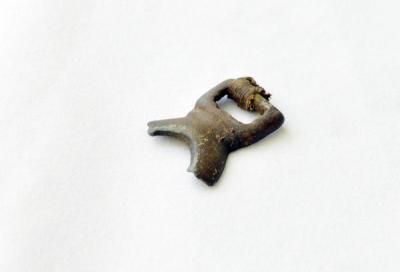 Turns out this is a twofer. While I was looking for more information, I came across this from April:

Now another newly analyzed object from the University of Colorado-led Cape Espenberg dig is providing more evidence of prehistoric trade or contacts between the residents of Northwest Alaska and their neighbors across the Bering Strait. A flake of obsidian, a glassy volcanic rock, found at the site has been traced to Russia's Chukotka peninsula. Obsidian, formed from molten rock that hardens too quickly to form crystals, carries the chemical fingerprint of its source. "It's one of the things that we can very definitely say came from a specific place on the planet," said Jeff Rasic, a National Park Service archaeologist who analyzed the artifact. "We can say that this one came from Chukotka."

Although I have personally suspected this was indeed the case.

Excellent thread. Thanks for delivering this information to us. Its just good to see some threads whose titles involve neither the words "Trump", "SJW" or "Snowflake". Thank you.

And it goes without saying, s&f. 👍

China was trading via junks for a very long time.

Even so, it is not too much to ask a Chinese Junk to sail along their own coast, keep going and you hit Alaska.

The West seems to forget much of Chinese history because it interferes with their self importance.

posted on Jun, 8 2016 @ 01:30 AM
link
the stuff could of just as easily been washed ashore from tsunami debris or various other things the tide brings in, surprising there isn't more of the stuff

I suspect you may be right to an extent because of the fact that man has been around for such a long time yet we seem to only scratch the surface of his more recent activities. We have so little to tell us what he has been doing for even the last 12,000BC to 30,000BC.

I don't think people put themselves into their ancient ancestors shoes enough, because the one thing about humanity you can always count on is curiosity which would have led many to up and travel especially once man discovered logs floated and he could travel on top of floating logs.

There are so many questions we simply don't seem to ask.

i think that its more that China isn't really all that open to allowing the West to help explore its past. You get all manner of outlandish claims from that area of the world when the government isn't open to the outside world ("I invented the question mark!!!"). China is the oldest of old hats at that.

I don't think anyone questions how utterly ancient mankind is in China, or that is absolutely was a central point in the creation of civilization (the people in that area had their own, independent domestication event with a bovine concurrent with the Western one). I think that the problem comes with independent verification, and just an overall lack of willingness to explore anything that is not politically expedient. Which, while a problem in all nations...is particularly problematic in authoritarian ones.

originally posted by: ShadowChatter
the stuff could of just as easily been washed ashore from tsunami debris or various other things the tide brings in, surprising there isn't more of the stuff

That's an awfully dense, heavy material to make it across any kind of distance. Would you be more likely to believe that bronze (which has loads of lead in it) washed across a span of ocean, or that people hopped along coastlines in canoes and junks? I mean, Occam's Razor and all?

posted on Jun, 8 2016 @ 09:46 AM
link
a reply to: theantediluvian
While this particular find is newer, the fact that there was trade between Alaskans and Asians was established four years ago.
There was a thread here then about it.

Yes, these two bronze pieces were among the artifacts found in the 2011 excavations. What's new from the paper I believe are the metallurgic analysis and the radiocarbon dating of the leather strap on the buckle.

posted on Jun, 8 2016 @ 03:01 PM
link
One thing that seems to be forgotten is the fact that the Inuit/yupik people span the bering straights and their territory goes a thousand or more miles into siberia. Also the Chukchi people were up and down the shores of both continents.

And why is obsidian from Chukota such a big deal, its only 20 miles away, and people have traversing that piece of water for more than 20,000 years.

Even in the 800's adventurous chinese traders or fishermen were plying the waters off of Alaska. The Japanese were likely there to by the late middle ages, in search of salmon and furs, before they closed the doors to the outside world.

Another aspect about this find that is somewhat overlooked is the fact that an influx improved warfare technology gave the Aluets people an advantage over the previous dwellers of the Aluetian islands. Chinese bronze armor and battle axes have been found in the islands.
The "Eskimo" people were very warlike and aggressive expanders. They drove the dorset to extinction, and even told the early europeans how the dorset were afraid and easily ran off or killed.

While back checking this post i found this little snippet about historic period Aluets and their agressivness,


There was high demand for the furs that the Aleut provided from hunting. In 1811, in order to obtain more of the commercially valuable otter pelts, a party of Aleut hunters traveled to the coastal island of San Nicolas, near the Alta California-Baja California border. The locally resident Nicoleño nation sought a payment from the Aleut hunters for the large number of otters being killed in the area. Disagreement arose, turning violent; in the ensuing battle, the Aleut killed nearly all the Nicoleño men. Together with high fatalities from European diseases, the Nicoleños suffered so much from the loss of their men that by 1853, only one living Nicoleña person remained. (See Juana Maria, The Lone Woman of San Nicolas, also known as Karana)

Half way down baja, thats a long freaking way, their sailing tech then wasny much different to that 800 years earlier, whos to say it wasnt Native americans travelling south to trade with the people of ne asia?