Why is it that Americans doubt their own capacity to live in peace with other countries?

You mean like Russia is doing with the countries around them...that kind of peace?

posted on Jun, 7 2016 @ 05:54 AM
link
So if NATO holds joint exercises is provocation? What about all those times Russia has held much larger exercises (we're talking 100,000+) right on the border of those nations that feel threatened? The double standards some people apply to Russia are absolutely ridiculous. Russia is a bully plain and simple. They're the ones that have annexed land from their neighbors. Not the US. They're the ones who have threatened the use of nukes time and again. Not the US. Russia only has one person to blame for their current predicament. Putin.


The exercises come just weeks after the United States inaugurated the first of two controversial missile-defense installations in Eastern Europe.

The one's that Russia has known about and have been shown they are not capable nor are they even targeting anything coming from Russia...those missile defense sites?

Next year, the Pentagon plans to quadruple military spending in Europe to $3.4 billion and begin rotating an armored brigade through Eastern Europe — in addition to extra NATO forces to be deployed to Poland and the Baltics.

So nothing new they are just using this to upgrade the equipment being used by rotational troops already, and provide better training for those NATO allies in eastern Europe...

The ABCTs will be on nine-month rotations from the U.S. and will bring their own modern equipment to conduct exercises across Atlantic Resolve countries. These rotations will demonstrate our ability to rapidly deploy equipment and forces to Europe by sending U.S.-based rotational forces with their currently assigned equipment. This equipment will be the most modernized the Army has to offer and over the next year will replace the current training equipment in Europe. When the first rotational armored brigade combat team arrives early next year, the equipment currently used by rotational forces, known as the European Activity Set (EAS), will remain in Europe, be repaired, upgraded, and converted into the core of the APS we announced in February. We plan to have APS stored in Belgium, the Netherlands and Germany.

And he knows that is all he can do, because acting on that threat wouldn't be the smartest of moves for him...and he knows this.

The large-scale maneuvers will only fuel the Kremlin narrative that Russia is being encircled by hostile forces.

Unless China allows The US to put forces on their land there is no way Russia is being encircled by anyone hostile. Also know had Putin not pulled his little game in Ukraine those countries wouldn't want the extra security from becoming the next Ukraine.

European peaceniks, too, won’t have to look far for new evidence of American war-mongering.

As though they don't see the war mongering Russia has been doing towards it's neighbors since Putin has been in charge...even during his time as PM.

originally posted by: Wide-Eyes
a reply to: nwtrucker

Always happy to point new or old members in the right direction...

posted on Jun, 7 2016 @ 04:39 PM
link
I just have to say that if Texas broke off and became its own country, or worse yet part of Mexico, we would not allow them to partake of anti missile batteries so close to us. Hell, for that matter they'd never be allowed to break free and form their own country. Anybody remember the civil war? If Texas broke off and had anti missile batteries then they could form an alliance with somebody like Russia to stop our outbound missiles and Russia could send them their latest technology to do so. Would that seem ok to folks here in the US? One has to gauge themselves with the hypocrisy meter.

So pardon me if I can see Russia's point. Does that mean I loveth the Russian ideal and wish to live there? Hell no. Lol. There are nations where the people have absolutely no desire to live in the USA either. I'm just saying nations have the right to self determine as long as they are not invading their neighbors. If however you can invade an nobody can do squat about it (e.g. American Indians) go for it. Nobody rules anything that you cannot successfully defend by force.

True, but that was the time when Russia was not as powerful as she is today. She was not a super power, so the US and NATO had no problem with it.

And seriously, anyone who thinks this is not a provocation, is out of their mind. Holding an exercise of this scale, that close to Russia at the time like this, is clearly a provocation. I don't see why people have problem with admitting it, and go into the same usual "Russia did this, or they did that..." bs.

The simple fact is that Poland has every right to hold whatever exercises they want, with whatever participants they want within their own borders. Other nations can complain all they want, but the exercise is talking place within Polish territory.
edit on 6/7/2016 by Zaphod58 because: (no reason given)

Am I denying that right?

I'm simply stating the obvious, which some people here don't want to admit.

It's an obvious act of provocation. And it's fine; it's nothing new. All my life I had witnessed these kind of stuff from both sides, so I'm used to it by now, which is why I think this thread is pointless.

Nothing will happen because of this exercise. Russian respond will be holding their own exercise.

originally posted by: Nikola014
a reply to: MrSpad

Holding an exercise of this scale, that close to Russia at the time like this, is clearly a provocation. I don't see why people have problem with admitting it, and go into the same usual "Russia did this, or they did that..." bs.

Exactly As an independent Brit I can see exactly where you are coming from. NATO is taking the piss with these exercises. Russia has its back yard and Russians have their pride. Stupid NATO

posted on Jun, 7 2016 @ 05:40 PM
link
Quite frankly Im more concerned about the two US aircraft carriers skulking around the Chinese built islands that is far more serious than the usual NATO/Russia noises.


Exactly As an independent Brit I can see exactly where you are coming from. NATO is taking the piss with these exercises. Russia has its back yard and Russians have their pride. Stupid NATO

And NATO has the right to have exercises with members of the NATO alliance...that goes for any nation bordering Russia, and there is nothing that Russia can say, but they feel they have the right to when they don't.

Well, think about it this way.

Isn't way better to have them complain about it, without actually taking concrete action and starting a big conflict?

Or is that exactly what you wish for, and you are just disappointed?

So if NATO's routine exercises on NATO-member territory are provocations, what are Russia's massive exercises intended to be? 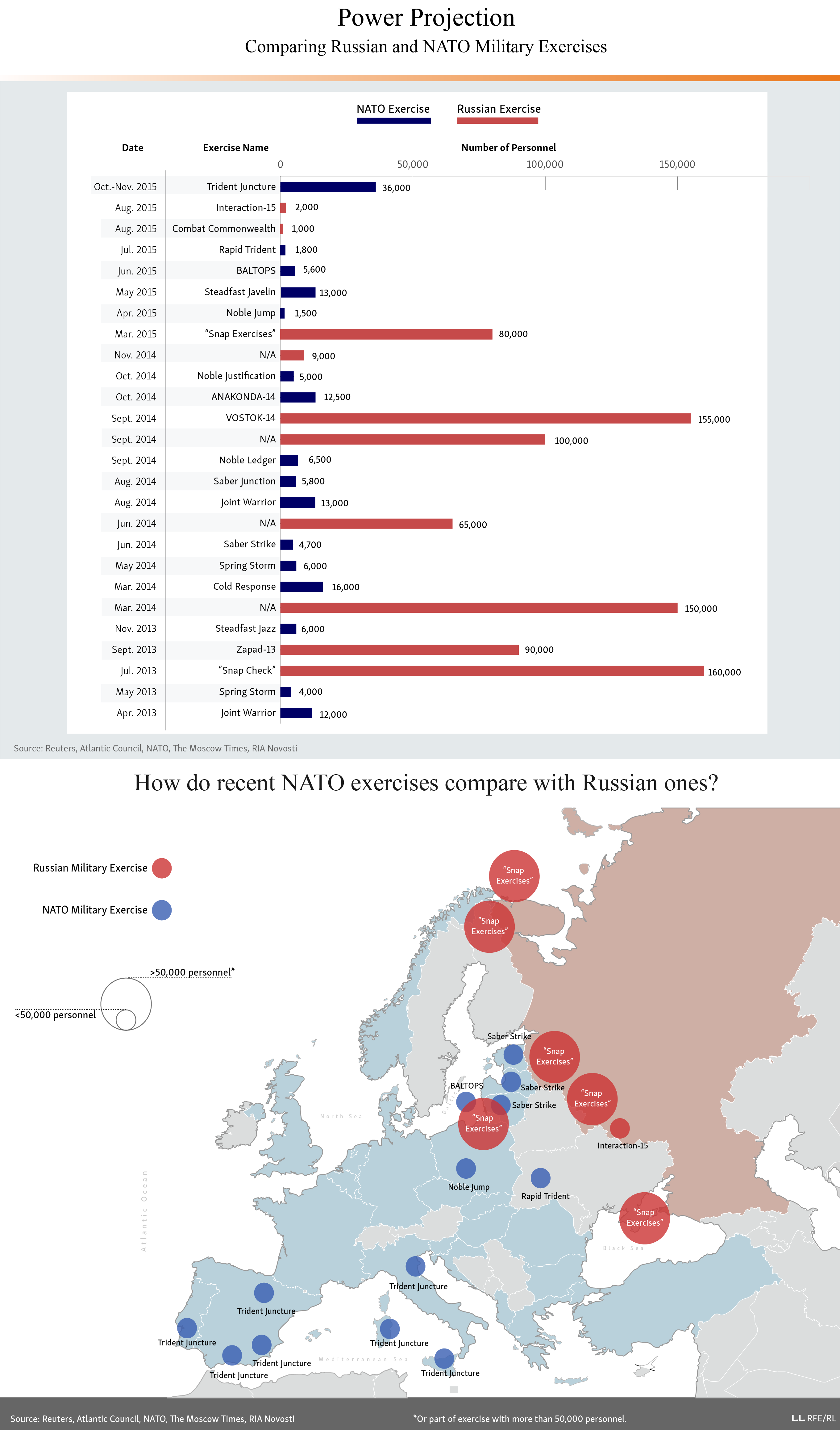 (Note that Russian sources are cited.)

We're going in circles people. There's nothing strange about any of this. No need to get alarmed.
edit on 257k2016Tuesdaypm014 by Nikola014 because: POOR ENGLANDO

Nuh-uh. NATO's exercises are a response to Russia's!

We're going in circles people. There's nothing strange about any of this. No need to get alarmed.

Explain that to Jeffersons111Ghost, please. He seems to be suffering from over-exposure to RT.

Where did I say anything about anyone starting a conflict other than stating a fact that Putin knows attacking a NATO country is bad for him to do and he knows it?

But I see now you are back pedalling with your comments now saying there is nothing stramge about any of this...oh the hypocrisy you spout is astonishing to say the least.

Also remember what you just said next time the west says something about the Russians training their troops near a NATO country...because I know I will.