posted on Jun, 5 2016 @ 04:20 PM
link
a reply to: Profusion
Physically, those born as males have a definite advantage over those born as females in areas where strength and speed are concerned. This individual was not yet fixed and had abundant natural testosterone to build muscle that the ladies did not have, which made the competition unfair as he was still a he.
Like other areas, such as rest rooms and locker rooms, there is an easy test. Drop drawers. Check crotch. Female parts = ladies. Male parts = men.
How one "feels" about one's gender at the moment is irrelevant.


originally posted by: DupontDeux
a reply to: Profusion

It should not be allowed.

And more importantly, the athlete should not want to.
It is simply unsportsmanlike.

And to me at least, unsportsmanlike behavior totally defeats the purpose of entering (amatour) competitions.


Tall people play basketball. Is that unsportsmanlike to short people? Everybody uses their different advantages to gain victory over others. Men and women are now defined to be equal, so we can no longer object to them competing in the same arenas, whether business or sports, or war or peace.

You want to keep pretending that anyone can just simply say they are this or that gender. Let's see if teenagers can actually live as the other gender, go through all the counseling etc long enough to get the so called perks.

posted on Jun, 5 2016 @ 04:22 PM
link
We've reached a level in our society where the archaic differences between men and women needs to stop.

If individuals cannot compete athletically, then they can make sandwiches and drinks for those that can.

But I would like to be the first to say NO to "separate but equal" in sports!

posted on Jun, 5 2016 @ 04:30 PM
link
So isn't it only fair that male athletes who self-identify as women can now compete against women for college scholarships in athletics?

Again there is a long process to go through before you can just simply say you identify as _____. If you think teenage boys are willing to take hormones to stop puberty as well as sit down with a shrink once a week and live as a girl at school just to get an athletic scholarship then I think you're crazy. They could simply get one for acting instead.

No, it's not illogical. You're saying that since she was born a he that she shouldn't be competing against natural born girls because it's not fair.

But if that was the case then she that was born a he wouldn't have come in 3rd and 5th. Because coming in 3rd and 5th means other natural born girls still beat her/him.

If being born a boy isn't fair to the girls in competing then why did other natural born girls still win???

Why do the boys have to be teenagers? Can't men self-identify as woman AFTER puberty?

Must have been a sissy.


You want to keep pretending that anyone can just simply say they are this or that gender.

From the VERY brief research I've done it appears that men are typically about 10-12% faster. So sure, some of the women beat her, but if you pitted all the women and all the men together I don't think it would really make sense. Of course some women are going to be faster than some men. Majority of the time (when looking at actual athletes) men are going to be faster.

I don't think it seems all that fair to let males compete with females if they aren't on hormone therapy for whatever amount of time it takes to "feminize" them.

Do you think it would be fair to just desegregate all together and have males and females compete? Serious question. It just seems like it wouldn't be much fun for the female athletes since it's unlikely their top tier is ever going to beat the men's top tier.

I'd sort of like to see how she would have stacked up against male runners for the state championship.

Also, at what point do we say it's not fair? When a male competes with women in weight lifting?

I don't get why it's taboo to recognize the physical differences between men and women. I don't think it takes anything away from a woman's athleticism.

So why have separate men's and women's competitions? Men should be able to compete if they identify as a woman, so no one should complain when they get all the scholarships, completely take over every competitive female sport, get all the best ad contracts etc. Don't forget, they don't require people to be on hormone therapy in this district. Like I said earlier, just because this girl/boy didn't place in the top doesn't mean there wasn't an advantage.

In the context of getting scholarships, usually happens in the teenage years so...

So what would happen if he started taking testosterone steroids or something??? Would he start being more like a boy and place 3rd or 5th against boys???

Maybe all this is about is just chemicals and biology. What happens if we just start injecting boys with testosterone and girls with estrogen early on. Would people still identify as trans then???

It's not taboo to recognize the physical differences between sexes, no one ever said that... don't get all triggered into an anti-SJW rant. Obviously in general males are stronger and faster than females... but this transgendered girl wasn't so for other girls to make a stink about it is silly. With or without hormone therapy I don't think you're going to find too many boys and girls willing to live as the opposite gender in high school. Look at all the what-ifs that never happened by freeing slaves, by letting minorities vote, by letting gay couples be gay, by letting gay couples adopt and live as families... it's long past time to gtf over "other", don't you think?

The girl in the OP. 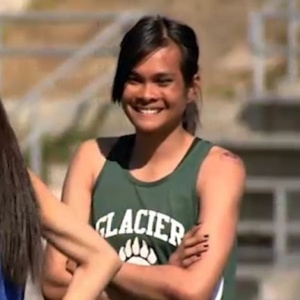 Alaska Family Action president Jim Minnery and a dozen supporters of his conservative group gathered outside the state track meet to protest an 18-year-old who was trying to live her life, according to multiple local media reports.

Transgender student athletes are allowed to participate on the teams matching their gender all across the country. It has been this way for years in some places.

The Case for Allowing Transgender Athletes in Youth Sports

Old article. IOC rules have been updated but other facts about body mass, bone density and hormones are pertinent.
Do Transgender Athletes Have an Unfair Advantage?

Do transgender athletes have an edge? I sure don’t.


A question for schools: Which sports teams should transgender students play on?


Thirty-two states have adopted policies in recent years regarding transgender athletes, according to the National Federation of State High School Associations, with several states placing restrictions on their ability to compete with teammates of their preferred gender. For example, Virginia, Georgia and North Carolina require students to play on teams based on the gender listed on their birth certificate, according to Trans*Athlete, an online clearinghouse for information about transgender athletes.

At least 10 states and the District allow transgender athletes to play on their preferred teams, according to Trans*Athlete. New York is expected to consider such a policy this month. The one considered this week by the Minnesota State High School Sports League would have left discretion up to individual schools, with the caveat that students and their parents could appeal the school’s decision to the league.

I think this needs to be handled on an individual basis and people need to calm the fkck down with all the outrage and think about the lives of transgender kids. Imagine being the parent of one and try having a little compassion and understanding for the challenges these families face.

So you are for 'separate but equal" in sports.

posted on Jun, 5 2016 @ 05:36 PM
link
Screw biology and hormones, all that matters is how they feel and self-identify. Seriously, GTFO of here. This is so ridiculous. I don't care, except have some common freaking sense.

originally posted by: mOjOm
a reply to: Kali74

That's what I was thinking. If being male is such an advantage then she should have came in first right???

Obviously there were other natural females on the track who she couldn't beat so maybe the other complainers are just slow and lazy and need to up their game instead.

Or, what we should do, is have a male run every race where the girls participate. And every girl who beats the male, would be automatically excluded from the race, along with the male, so that we could identify the "true girls" in the race, so that only real girls would be competing against other real girls. Any girl who could beat a guy would be classified as disqualified to compete against other normal girls. That would be fairer.