originally posted by: IgnoranceIsntBlisss
So a heterosexual man dresses up in a bikini, parades around shaking his ass on the corner like "Beyonce"...
and that has nothing to do with transgenderism?

Gee I must be the dumbest creature this side the Mississippi to have gotten that impression.

Please do explain it for me then oh wise insightful one.


the fact that you think the 2 are related when they are 2 totally different things shows how ignorant you are...transgender, their brain wiring is telling them they are the opposite sex...transvestites enjoy dressing as women it is a stress reliever for many of them..they don't want to change their sexual identity...

hetero bikini guy, he thinks dressing up like women is funny and is making a living at you are making a mountain out of a mole hill

posted on Jun, 10 2016 @ 12:52 AM
link
Okay, so no correlation whatsoever to be found between transsexualism and transvestism. Thank you for setting the record straight... or did you?

Considering he effectively killed the thread, you might try harder than that.

Anyway yes these two are not related. Not even close.

posted on Jun, 10 2016 @ 02:21 AM
link
Cool! Following your's method there, next time somebody posts something anywhere that gargantuanly contradicts something I'm trying to carry on about, all I have to do is declare: "nope, not relevant to anything", and I win the debate! The debate will promptly end upon my declaration of irrelevancy!

Thank you for this, I really mean that!
.
edit on 10-6-2016 by IgnoranceIsntBlisss because: (no reason given)

Read what you typed and tell me it makes sense to you.

posted on Jun, 10 2016 @ 03:12 AM
link
The John Hopkins university collaborates with madness all the time, with its experiments on hallucinogenic drugs and patients with terminal illness

No? If you say no, that's madness!

When your mom begs you to be Jack Kevorkian for her, you had at least better have a line on some good ____ (4 letter M word) for her. If not, also live with regrets.
edit on 10-6-2016 by IgnoranceIsntBlisss because: (no reason given)

I'm here hoping that you are a poe.

What are you talking about? She's going after his "research". And how he was disowned by his own "peers".

originally posted by: dismanrc
a reply to: Annee


Oh, did I mention he was Catholic? That he supported Catholic priests? That he is anti-abortion - - - even for a raped 10 year old girl?

That he is closely connected to the American Family Association, Family Research Council, and NARTH (reparative therapy).

Is that what has your panties in a bunch?

He's been discredited academically by his peers.

posted on Jun, 11 2016 @ 05:35 AM
link
Well, unfortunately for the "mental health" people, the whole psychiatry/psychology thing is pseudoscience. The only part of it that is real is the intense desire by some to control and manipulate the masses and to marginalize and suppress "problem people". Some of it works and some of it doesn't but I have a hard time with the idea that science should be abused to control people's minds.

That's not to say that some part of the whole GLBT movement isn't malicious but many of them do believe they're doing the right thing for the right reasons. I strongly disagree with most of it but I think many of them are sincere and don't realize they are being used and manipulated. I'm a libertarian. I believe in everyone's rights. Unfortunately, a lot of the stuff this movement has going on is purely using these people for political purposes and doesn't really care about them or their concerns and rights. They're just a means to an end.
edit on 11-6-2016 by BrianFlanders because: (no reason given)

Or keep the undesirable locked behind closet doors.

"Demoralization" is a psychological warfare term. If your goal is to destroy a society or nation from the inside you have to "Infiltrate" it first. They infiltrated the US many, many decades ago.

The second step is to "Demoralize" the nation by destroying its core values, its common sense, its moral foundation. This causes confusion, self-doubt among those who do NOT know they are being manipulated towards their destruction. Take a look at the Liberals who support anything the Left supports without question.

"Demoralization" can run concurrently with the last step, "Destabilization," in destroying a society.

The fastest way to "Destabilize" a society is to DESTROY ITS ECONOMY. Obama has doubled the national debt in less than eight years. The Middle Class is no longer the majority in the US.

The NWO Cabal is using the Far Left and the Radical Islamists to destroy the First World nations.

NO - - we are just an evolving society.

Gender Dysphoria is not new. Homosexuals gaining their freedom and equality, opened doors for others in the LGBT community.

posted on Jun, 13 2016 @ 09:50 AM
link
From my Social Engineering: Proof That Media Exposure Can Warp Gender Identity In Adult Men "BRONY" thread:

originally posted by: BigBrotherDarkness
a reply to: awareness10

Hows that whole growing up thing been working out for you? Are you happy all the time now that youve killed your inner child instead of embraced him or her in wholeness? 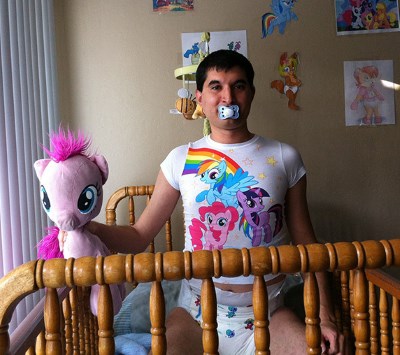 Paraphilic infantilism, also known as autonepiophilia and adult baby syndrome is a sexual fetish that involves role-playing a regression to an infant-like state. Behaviors may include drinking from a bottle or wearing diapers. Individuals may engage in gentle and nurturing experiences (an adult who only engages in infantilistic play is known as an adult baby) or be attracted to masochistic, coercive, punishing or humiliating experiences. Diaper fetishism involves "diaper lovers" wearing diapers for sexual or erotic reasons but may not involve infant-like behavior. Individuals who experience both of these things are referred to as adult baby/diaper lovers (AB/DL). When wearing diapers, infantilists may urinate or defecate in them.
en.wikipedia.org...

Now some useful data to the topic:

We've already got that many case studies just in the thread so far (without even yet focusing on this particular).

Other more recent case studies have noted different etiological pathways into infantilism with childhood sexual abuse and transgender issues being apparent common factors among a number of published case studies. In a 2003 issue of the journal Sexual Abuse, Lehne and Money reviewed the case of a man with changing fetishes (transvestic fetishism, pedophilia) who in the final analysis described himself an adult baby (aged 45 years). In 2004, Croarkin and colleagues reported a case in the American Journal of Psychiatry. Here, a depressed 32-year-old male engaged in behaviors that included getting sexual arousal and gratification from wearing nappies and becoming a baby. The authors suggested that the infantilism may have been related to obsessive-compulsive disorder. Two years later in the Archives of Sexual Behavior, Evcimen and Gratz reported the case of a 25-year-old male who wished to be a 10-year-old girl although it is debatable whether this case would really be classed as infantilism.

The most recent case (2011) of ‘adult baby syndrome’ was reported by Kise and Nguyen in the Archives of Sexual Behavior. They outlined the detailed case of a 38-year-old biological male who preferred to be identified as a female (and referred to him as ‘she’ throughout their paper).

And there it is folks: clear links between abuse and sexual fetishism and transgenderism... as well as mental disorder:

“Perhaps desiring the identity of a baby is an entity all in itself, just like Major Depressive Disorder or Schizophrenia…This does not represent a new phenomenon…In some instances, [Adult Baby Syndrome] seems to represent a paraphilia. [In this case] she specifically denied sexual pleasure…her primary intent seems to be one of gaining attention and additional care, freeing her from adult responsibilities. Further investigation into the connection and potential co-morbidity between ABS and Gender Identity Disorder may lead to interesting findings.”

You should all take a good look at that article. That's only the 2nd thing to come up in Google.
edit on 13-6-2016 by IgnoranceIsntBlisss because: (no reason given)

originally posted by: LoriA
a reply to: xuenchen

Sexual Orientation: the brain tells you who you are sexually attracted to.

Gender Dysphoria: the brain tells you what gender you are, which is opposite of your physical sex.

The brain hard wiring is developed in utero.

The guy in the White House knows the difference.