The hummingbird spirit animal symbolizes the enjoyment of life and lightness of being. Those who have the hummingbird as a totem are invited to enjoy the sweetness of life, lift up negativity wherever it creeps in and express love more fully in their daily endeavors. This fascinating bird is capable of the most amazing feats despite its small size, such as traveling great distances or being able to fly backwards. By affinity with the hummingbird, those who have this bird as totem may be encouraged to develop their adaptability and resiliency while keeping a playful and optimistic outlook.

So a month or so ago I had a close encounter of the third kind with a hummingbird. I walked out on my deck..I heard the flutter of his wings and looked up to see a little blurred object coming my way. And then, right in front of my face.. he paused and stared directly into my eyes. His head tilted to the right.. my head tilted to the right. We both looked at each other for a few short moments. He sized me up and down.. I did the same to him (although my part was very short, cuz he's like one inch in length) and when he was satisfied that I belonged in this world..he quickly flew off, the sound of his wings fluttering following his departure.

Anyhow, I've been wanting to learn some more about this creature since then. I dunno, him just making such a big deal about me being on my deck, looking at me like I was an alien or something. I just wanted to see what this little creature was all about.

And this morning, thanks to a loving family member who decided it would be a good thing to wake me up at 2:30 am... I finally took the time to do so. Quite amazing these little birds are. There are so many myth and creation stories out there about them. And some pretty interesting facts as well... just felt like sharing a few with you in this lazy, rainy, need more coffee , too early on a Sunday morning thread..

They are named for the sound their wings make, which sounds like a hum. This is caused by how fast they beat their wings, which can be anywhere from 12 to 80 beats per second, allowing them to hover similar to adragonfly. They are also the only family of birds that can fly in reverse, and they are able to fly at speeds of 34mph or faster. Only 3-5 inches in length (some species are no larger than a bumblebee) they are the smallest bird in known existance

They were once thought to be indigenous to North America, but there have been recent fossil finds that indicate they also lived in other countries such as France and Germany

All 335 living species of hummingbirds are found exclusively in the Americas. These birds astounded and fascinated the adventurous European naturalists who first encountered them zipping about in the tropics. Ever since, the logical assumption has been that this family of tiny, hovering birds originally evolved in the New World. It therefore came as a great surprise when in 2003 a fossil-bird expert named Gerald Mayr recognized that several 30-million-year-old remains from a site in southern Germany were actually fossil hummingbirds. Mayr carefully described those hummingbird fossils, clearly documenting that hummingbirds occurred in the Old World during the early part of their evolutionary history.

The British army used them to compare how their drones would boast against the hummingbirds hovering capabilities..

Research published in the journal Interface compared a 16 gramBlack Hornet Nano drone used for surveillance by the British army with hummingbirds that weigh no more than 4 grams, concluding that the best birds were 20 per cent more efficient than the drones.

One Mayan legend says that the hummingbird is actually the sun in disguise, looking to court the moon, a beautiful woman. Another Mayan myth says that hummingbirds were in fact created from the left over feathers of other birds. The god was so satisfied with his creation that he created another and gave them a wedding. It is said that the male bird would shine of red and green when facing the sun but turn a dull gray when he turned away. The Chayma people of Trinidad thought that hummingbirds were their dead ancestors and so forbid the harming of the creatures.

In Nahuan (indigineous people of Mexico) and Aztec mythology, hummingbirds and butterflies were believed to be the reincarnated spirits of dead warriors.

A Mojave legend tells of a primordial time when people lived in an underground world of darkness. They send a hummingbird up to look for light. High above them the little bird found a twisted path to the sunlit upper world where people now live.

There is a ton more mythology behind these little guys. Quite interesting that such a small bird could create such a huge reputation for himself.

Anyhow.. thanks for reading...hopefully you found something of value here...some tidbit of information that you maybe didn't know.

It WAS very nice with my coffee. 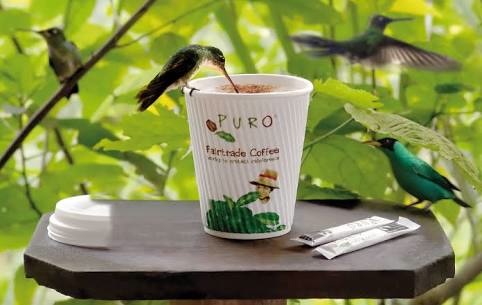 posted on Jun, 5 2016 @ 09:09 AM
link
Hummingbirds are a big part of my daily life. We have created a garden in the backyard that is a feast for hummingbirds and bees. We sit on the back porch in the mornings and watch all the birds. We get orioles, copulent amounts of dove, a few breeds of sparrow and finch, cardinals and bluejays (and mexican jays), mockingbirds...we have quite a large population of birds living in the scrub brush acreage behind me (a state park, and a doctors land on either side).

The hummingbirds are the stars of the show. Im about to head out there with a cup of coffee to watch them while the dogs roll around the grass and get some sun.

Here's a pic of one of them i snagged on my hummingbird feeder: Coffee's done. Have a good morning.

I've had many of these close encounters with hummers. Sometimes, they hit the window and become stunned. I've held many of them in my hand, waiting for them to get their wits about them again. Then there are the times they were trapped in our garage or under an awning and I've helped them out by just approaching slowly and gently picking them up. They are fascinating little creatures.

He's one of the 10 feeders we used to put out every year. We don't put out that many anymore, but still love to watch them! 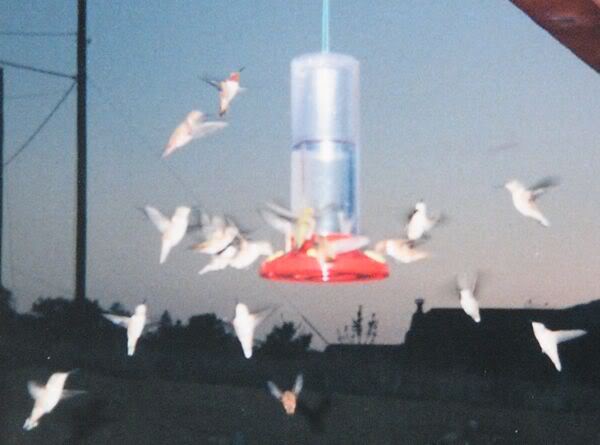 that is rather amazing. Our hummers are mean to each other, and won't tolerate another hummer being near the feeder. So we get to see them doing a lot of dogfighting, which is itself entertaining.

But they are kinda jerks to each other.

Ours are mean, too! But when there's 100 birds around the house, they're just in a feeding frenzy, trying to eat all they can. If there's just one bird at a feeder, another will buzz in and try to get him to leave.


But they are kinda jerks to each other.

They're incredibly aggressive birds. If you watch them - they'll go after much bigger birds too. Absolutely fearless


I only have the one hummingbird that visits from time to time. I put up a feeder, but he is the only one that comes to feed. I did not know that they fight and are mean.

I'm glad you found some value in it.. even if it was just a nice way to wake up with your cup of java..

I appreciate all your thoughts and input.. and especially the pics!

I guess it was 8 feeders, not 10. It's been about 10 years since those photos were taken. I did a thread here with more pics:

I had a very interesting encounter with a female hummingbird last summer. There's no feeder here - only the garden. But she seems to visit this garden during the last few weeks of summer every year on her way south

I'm really hoping she comes back in September

They are weird little birds - love them

I was poking around youtube for a vid to share, but there are so many I couldn't decide and I couldn't stop looking at them all. LOL

Is interesting that there is one that seems to follow you around your garden. Such beautiful and amazing little things. I hope she comes back around for you in September as well.

I did notice that this little guy who thinks that I am intruding on his domain has a specific flight pattern around my yard. Like he's set up fly zones and no fly zone areas..very interesting to watch.

That guy right there that you posted is pretty beautiful.. The one that is eyeing me up is very plain... but still quite cute. I should probably look up what kind is indigenous to my area. I dunno if he is young and gets some color later in life, or if that is his natural plume.

Thanks for the interest and responses.

posted on Jun, 5 2016 @ 04:18 PM
link
Hummers have a special place in my heart since my Grandmother loved them so. Thanks for the thread.

We put out a feeder on each side of our house. They still fight over them. My neighbor was lucky enough to have one sit on her hand as it fed. That's my goal.

originally posted by: Spiramirabilis
a reply to: blend57


they are very curious. they are always buzzing up to take a look at us. they hover, look at us, then move to do the same from a different angle. after a few seconds of that, they fly off.

Omg I love it! Thank you! Very interesting that they change flight by monitoring feature position and size on the vertical axis.
Plus just watching the video was pretty cool.