Handout or no? Swiss mull $2,500 monthly income for all

Where, exactly, do they intend to get all of that money? Lots of people willing to do nothing, of they can get a free ride.

posted on Jun, 5 2016 @ 02:33 AM
link
Well it could work, mind it would take a "Bale In" of the Bank interest in that country to do it... Mind that means everyone with a Swiss Bank account would be funding the Swiss folks monthly stipend.

But it would be doable.

And that is with out touching the Raw income or the current tax basis.

But there would be a Run on the banks from foreign investors that would make Greece look like a walk in the park.

Then it would have to be looked at and Reviewed and changed.


You cant understand something, you put it away.
Goood yankees....

posted on Jun, 5 2016 @ 04:55 AM
link
It's extremely difficult to have these conversations in a society brought up on Protestant Christian values and ethics societies, with the deeply rooted beliefs in the Protestant work ethic, where one must work to eat and work to get into an afterlife of heavenly bliss. Don't work, don't eat is the ideology of the Christian work ethic. No wonder the Chinese admired this part of western civilisation. en.m.wikipedia.org...


is a concept in theology, sociology, economics and history which emphasizes that hard work, discipline and frugality[1] are a result of a person's subscription to the values espoused by the Protestant faith, particularly Calvinism, in contrast to the focus upon religious attendance, confession, and ceremonial sacrament in the Catholic tradition.


originally posted by: DBCowboy
a reply to: syrinx high priest

What part if "It's not sustainable" did you not understand?

You do understand that Marx has "don't work, don't eat" in his own system of values too because he realizes that if in his own version of the world that if everyone has stuff provided to them, the impetus will become powerful for people not to work, it's all provided.

In the USSR work is a duty and a matter of honor for every able-bodied citizen, in accordance with the principle: “He who does not work, neither shall he eat.”

This was Lenin, but it was part of Marxist theory. The idea was that once all property ownership and goods ownership was abolished it would theoretically be impossible for anyone to leech off the system. And there was an acknowledgement that the truly disabled and elderly would have some kind of basic providence, but essentially, the new "utopia" understood that basic idea too.


There is no free state health service in Switzerland. Unlike other European countries,

Oh and guess what they have the most direct strongest democratic system in the world - heaven forbid! the Swiss healthcare system is not tax based or financed by employers but is paid for by the individual through contributions into health insurance schemes. The system is universal but it is administered by individual cantons.

Approximately four times a year, voting occurs over various issues; these include both initiatives and referendums, where policies are directly voted on by people, and elections, where the populace votes for officials.

So when you're done bashing Switzerland & Europe, care to give us the highlights of living in the USA, because, you know, its a well kept secret...roads paved with gold and honest Government and honest fair taxpaying corporations!


Actually, as I stated, I "thought" they had socialized medicine, mostly because so many top notch countries in Europe do. No, I didn't research. But your information is somewhat comical: "the Swiss healthcare system is not tax based or financed by employers but is paid for by the individual through contributions into health insurance schemes. The system is universal but it is administered by individual cantons."

posted on Jun, 5 2016 @ 07:32 AM
link
There are some smart people in Switzerland. The first country to transition to a robotic society will be known in history books forever. More importantly, they can manufacture stuff and export it and still get money. Even though this will mean people in other countries they export to lose their economy at some point unless they robotize society as well. The first will have the most chances of making it, that is without wars or social unrest, looting etc.

Everyone who is comparing this to communism or any known system does not understand what it will be like to have a robotized society, provided it is somewhat fair to all. At the time of Lenin and Stalin there were no such robots, at best people could envision a society with a lot of machinery and humans to operate them.

It'll not be the government that will have control but the rich robot masters will have the most influence maybe for generations to come when they pass the company on in their families. But if the robots are owned by the people it'll be paradise, which ofcourse knowing man on this planet is unlikely to happen. Still at least that country is preparing themselves for the coming age of the robots. I don't see other countries doing the same and most will have huge problems when millions of jobs are lost overnight. Because once robots are of a certain level of technology they'll be mass produced and things will go a lot faster in a short amount of time (relatively, it'll still take years maybe even decades).
edit on 5-6-2016 by johnnyjoe1979 because: (no reason given)

Have you seen how well people take care of goods owned in common?

It isn't a pretty thing.

The other issue, and I've brought this up, is that cheaply produced robot goods will be more or less the crap of society. They'll be society's Walmart goods. Anyone can have them. They will not be quality, etc.

We already see it today with the artisanal movement taking place. Those who produce quality artisanal goods will be the new "haves" in society. Why have cheap a "robot Walmart" blanket, when you could have a hand-made artisanal blanket? Of course, people who have the knowledge and spend the time and effort to make such things will be wealthy now. They will be the new "haves" as will those who can afford to have such goods instead of having to settle for a life of "robot Walmart."

So will we again start dividing ourselves and having a new capitalism based on who can and will make and those who won't.

Here is a good lesson. study in danish unemployment benefits.
vertical is when population leaves unemployment. 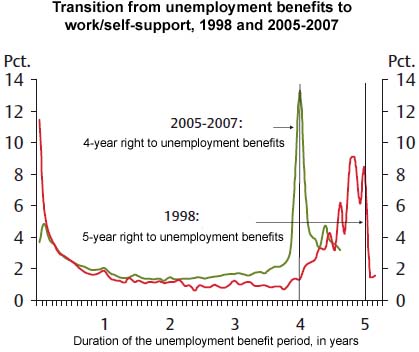 True communism would work.
If you Think hard and objectivly
WHY it didnt in former days, you
will know.

posted on Jun, 5 2016 @ 08:58 AM
link
I love how people on this thread make comments about if you didn't have an expensive defense budget or why can't America do the same..

It's like those people don't see that one country is substantially smaller in every single way so when it's not going to be sustainable in the smaller country it certainly wouldn't work in America.

That being said..I'm all for it as long as people doing well financially would not be precluded from getting this free handout.

posted on Jun, 5 2016 @ 10:37 AM
link
It now seems to be a moot point as early indications show that the Swiss have rejected the idea with at least 78% saying NO

Swiss vote No to Guaranteed income


So, what's UNIVERSAL about it????? Individual contributions????? Don't they mean PREMIUMS?


ZURICH — Like every other country in Europe, Switzerland guarantees health care for all its citizens. But the system here does not remotely resemble the model of bureaucratic, socialized medicine often cited by opponents of universal coverage in the United States. Swiss private insurers are required to offer coverage to all citizens, regardless of age or medical history. And those people, in turn, are obligated to buy health insurance. That is why many academics who have studied the Swiss health care system have pointed to this Alpine nation of about 7.5 million as a model that delivers much of what Washington is aiming to accomplish — without the contentious option of a government-run health insurance plan.


And, what's up with the nastiness?

Only nastiness I saw was envy and baiting (fear of immigrants) from your end; like I said "didn't research very hard?"

Now about the "great USA" and their roads of gold?
Their lack of poverty? any comments? You know because your fear of the unknown great Swiss Experiment must mean you have it pretty good to knock someone else's right to self rule?

I noticed you conveniently didn't address any of that,

if you require it of me and you're such a great "provider", why not then do so? Why break my back so you can waste resources better delved out equally, hoarded like the sickness it brings to a man's heart?
But I'm noone special, don't single me out---spread your wealth---far and wide.

otherwise your money has no value???

I didn't say that the system itself is sustainable but rather that parts of it are, the same holds true for Capitalism.
edit on 5-6-2016 by Aazadan because: (no reason given)

That is per month! The number I gave you was a year and only $2,500. Now multiply that number you came up with by 12. That would give you the figure for one year.

That $740 billion is a monthly figure not annual. It's close to doable in the US but taxes would need to go up a little bit, and not at that amount but rather $12,000/year, and half that if you make over a certain amount.

That would work if you abolished all other safety nets and were willing to accept about $500 billion more in spending per year (about 2% more taken out as taxes).
edit on 5-6-2016 by Aazadan because: (no reason given)