MSNBC is moving away from the Left and becoming Right 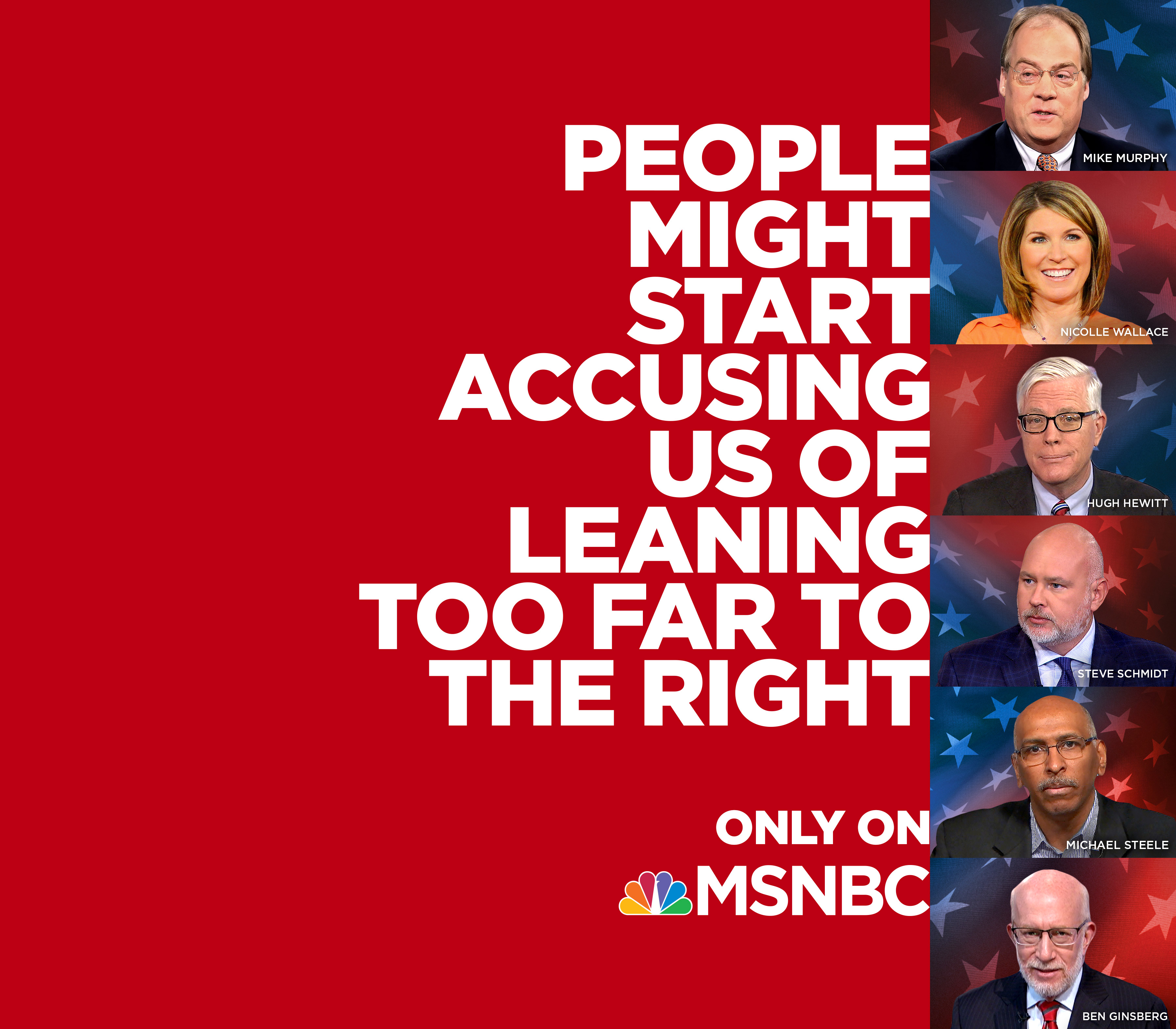 After struggling for years with terrible ratings and canceling one show after another MSNBC has decided to start moving to the Right. It's always been of my opinion that there is no such thing as left wing or right wing media and that's because those outlets are owned by elite establishment who cater to ratings and pushing their elitist agendas. And now MSNBC, the "progressive" news outlet is beginning it's journey to the Right. So long MSNBC, I never watched you to begin with, see ya!

MSNBC’s year of standing up straight

Report: Sinking MSNBC Prepares to Move Right
edit on 3-6-2016 by Swills because: (no reason given)

I mean MSNBC has always sucked.

So they're switching out the cast, all for the sake of the dollar, great.

I wonder if there will be equal but opposite new hosts, I mean like will there be a polar opposite of Melissa Harris-Perry, wonder how she feels about having -Perry in her last name witch such strong racial lenses on. So if they have the right equivalent for this woman haha, there will be some great video clips in stupidity.

posted on Jun, 3 2016 @ 04:51 PM
link
a reply to: Swills
What would be Good News is if the FCC reinstated the "Fairness Act" Ronald Reagan ditched launching the agenda of Fox News and the Great Division in the Country.

The MSM should be ashamed of themselves, but they are serving an Agenda instead.

posted on Jun, 3 2016 @ 04:56 PM
link
They see the success that Fox News is having by spreading right wing propaganda so I guess they're just following suit.

The right wing seems to be much more zealous than the left wing and seem to cling more to their ideology and thus whatever news panders to their bias, so I can't really blame them for switching when they're looking for ad revenue.

And still people bitch about how everything is Liberal and the truly delusional think the Left is poised to strike in every dark corner... meanwhile the US keeps marching right because without fail those few faithful viewers will adopt the new stances without blinking an eye.

originally posted by: 3NL1GHT3N3D1
They see the success that Fox News is having by spreading right wing propaganda so I guess they're just following suit.

The right wing seems to be much more zealous than the left wing ...

whatever happened to the truth?

MSNBC is no more "news" than Fox is. Like others have said, they need revenue, so they will change their business model: whatever works at bring in sponsors and ad revenue is the bottom line.

Sure, they cover news stories, but the 24/7 news cycle is nothing but biased punditry that drives a very real agenda that conditions and shapes people minds.The 24/7 mainstream media is a business, period. Its goal is to make money and push its agenda, not to truly educate and inform its citizenry as media should. There is no truth, only money.

Many people form their opinions (*cough* parroted talking points) through this constant influx of bias because many can't distinguish it from news and fact. And it's what the people want.

Confirmation bias is very similar to a drug addiction.

posted on Jun, 3 2016 @ 05:23 PM
link
The truth is MSNBC will subtly control every word spoken and they will control every issue presented.

They will even cleverly omit specifics for propaganda purposes.

Doesn't exist within the world of politics.

originally posted by: Swills
a reply to: everyone

The California Latinos I know work their asses off.

They don't burn the flag nor do they attack people.

These look like the same type of fools we all saw at Ferguson.

The California Latinos I know work too damn hard to protest.

These are mostly gang banging young Americans looking for a fight.

They will soon see the error of their ways.

Sounds exactly like Fox News, the network that pushes the same topics and ideology as you.

originally posted by: Kali74
a reply to: everyone

Here is your truth. The true face of the left and this is just a sample of recent events:


You lot attack men,woman,hispanics,blacks,gays all out of your hatred because they do not agree with you. You would even attack little kids, i certainty would not be surprised to see that happening after your leftist movement systematically shown and sowed so much violence and hatred for another.

You lot spill blood on the street out of your hatred in the name of tolerance (L.O.L) for others and you have the guts to criticize soldiers in a war who fought for you?

The problem with this entire scenario is we don't want the press to 'lean'.

Just tell the truth and quit acting like useful idiots for TPB.

This is a broad generalization. There are among people considered "leftist' some who are ruled by cheap emotion just as there are people considered 'rightist' who also are ruled by cheap emotion. To say that the left wing is assulting Trump 'en masse' is to simplistic. Stick with it if you want, but to some of us the picture is much larger and much more complicated than that statement allows.