I'm not sure if they're going to remain in Smyrna and fly back Monday, and take remains back with them, or head back today. Both teams will fly back to their home station for the stand down. The Thunderbirds will most likely make their next show, barring an inspection mandate of the aircraft based on what he tells the investigators. The Blue Angels may be a month or more before they fly another show.

I have some pictures from various online sources of the Thunderbirds accident but my phone is being a PITA about uploading them.
edit on 6/3/2016 by Zaphod58 because: (no reason given)

posted on Jun, 3 2016 @ 09:01 AM
link
I'm betting bird sucked down an intake. Loss of one engine that low and slow after takeoff doesn't leave many options. My respects to his family. I was looking forward to meeting the Angels in Cleveland.

Cracked.com has a very good article on how families are notified of the death of a military member and why certain things are done the way they are.www.cracked.com...

CNOs have my utmost respect. They summed it up perfectly at the start.

There's one of the many reasons that I have no respect for reporters or the media. I've actually had to do it. A friend of mine was transferred into one of the other helo squadrons at Jacksonville. He was killed in a crash on a detachment. Nobody in his new squadron knew him yet, but, his Chief knew that I knew him and his parents, so I was asked if I would help in the notification.

I remember when we lost 355 during a rescue attempt. I was visiting friends who were part of the Squadron but lived off base. As soon as the news broke everyone went home, and the base was absolutely dead quiet, even the areas not associated with them. You couldn't even hear cars moving around until we knew who it was.

"The morgue is guarded by a Marine at all times as the fallen Blue Angel will rest here until he can be taken home. A fallen Marine is never left alone until the body is laid to rest in the ground. It was an honor to talk to the gentlemen involved in guarding him and thank them for the service they give our great country! RIP fallen Blue Angel and thank you for your service. Thanks to all other military for your service too... To witness this, as sad as it is, is an absolute honor! #marines #blueangel #RIP #wesaluteyou" 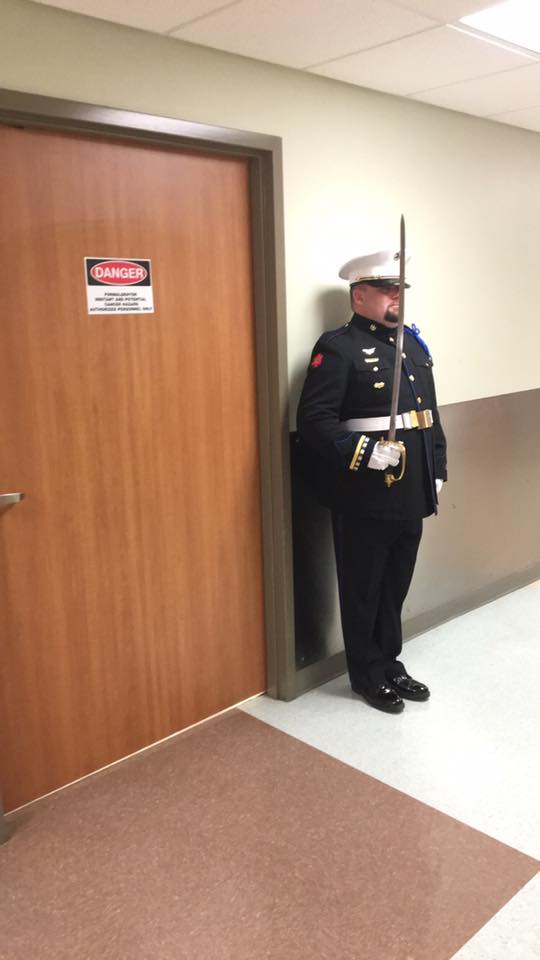 posted on Jun, 3 2016 @ 05:25 PM
link
a reply to: MamaJ
Active duty Marines do not have beards. This may be an honor guard from a discharged Marine, though.

I heard they flew back sometime yesterday ahead of some storms moving through this area, supposed to rain the rest of the weekend.

I had a feeling they would. I'm sure they'd much rather spend these days with family and supporting his family, and getting drunk. We're going through Arkansas and the weather was pretty ugly yesterday.
edit on 6/4/2016 by Zaphod58 because: (no reason given)

posted on Jun, 4 2016 @ 08:04 PM
link
They had over 50 people near the airport yesterday for the departure of the Team, and a large crowd and escort today for the remains of Capt Kuss. He departed for home on a Navy C-130 out of Smyrna. He was escorted by police from Murfreesboro to the Smyrna airport. They also held a candlelight vigil Thursday night, and a makeshift memorial has been erected near the crash site.

“The planes are gremlins. They’re Pensacola airplanes; they love warm water, they like nice weather,” Cook said. “We commiserate together.”

Kuss, from Colorado, and Cook, from Texas, shared a rural upbringing and loved talking about rodeos and ranching, he said.

“I could sit and tell stories about drinking a couple of beers and his, just terrible rendition of [Brooks & Dunn song] ‘Boot-Scootin’ Boogie,'” Cook said. “There’s an extra twang-level tinge that he adds to his singing voice.”

A decision is expected as early as next week if the team will cancel the rest of the season or continue flying.

posted on Jun, 7 2016 @ 08:26 PM
link
Capt Kuss departed Dover AFB on Fat Albert, flying as Blue Angel 6, with aircraft #5, the lead solo, flying escort. The departure was timed to arrive over Pensacola around sunset, where they were going to fly the beach and do the overhead into the base, which the team said the Captain loved to do. From Pensacola, he will be flown back to Colorado.
edit on 6/7/2016 by Zaphod58 because: (no reason given)

Thanks for the updates, Z.

What does "do the overhead" mean?

That's when they fly over the runway, and peel off one aircraft at a time, usually at five second intervals and circle back around to land.

Gotcha, thanks. I would imagine that would be a hell of a view at P-cola at sunset. Very classy.

You usually only see fighters do it. It always brought things to a dead stop to see planes like C-130s do it. I got to see two C-5s do it once. That was jaw dropping.

I think tonight after they arrive they're planning a candle light vigil in honor of the Captain.

This past Saturday, in honor of him and the Blue Angels the Canadian Snowbirds dedicated their show to them and started with a missing man formation. This weekend, the only civilian Harrier demonstration team (one Harrier and an L-39) will take their place in Syracuse and donate most of the profits to the Captain's family.

In somewhat lighter news the Thunderbirds flew for the first time in a practice show today. Neither team has announced plans for the rest of the season yet.