posted on Jun, 1 2016 @ 08:16 PM
link
The Researchers have used the concept of evolution in order to allow for robots to "mix genomes" (software) and then have a 3D Printed baby(Robot) based on the mixing of these genomes. Here's more:

What if robots could evolve?

It's the question asked by a group of scientists in Amsterdam, whose radical new project aims to create smarter, more advanced robots through a process similar to sexual reproduction.

While the idea may sound far-fetched, they've already demonstrated a proof of concept – in February, two robot parents came together to 'mate,' and the first 'robot baby' was born.

In the Robot Baby Project at Vrije Universiteit Amsterdam, scientists have developed a way for robots to have 'sex' and pass on their DNA to offspring.

As the process continues, the researchers say robots can become more suitable for use in unknown environments that could be hazardous to humans, like deep sea mines or even other planets.

'We have two robots that meet and mate, and just as in the animal kingdom, this results in a baby,' says Guszti Eiben, Professor of Artificial Intelligence at VU, in a video explaining the concept.

The video is interesting and it's a good idea. As 3D printers get more advanced they can mass produce robot babies. When you have these robots equipped with intelligent algorithms that can create smarter versions of itself, you could have Machine City from the Matrix. 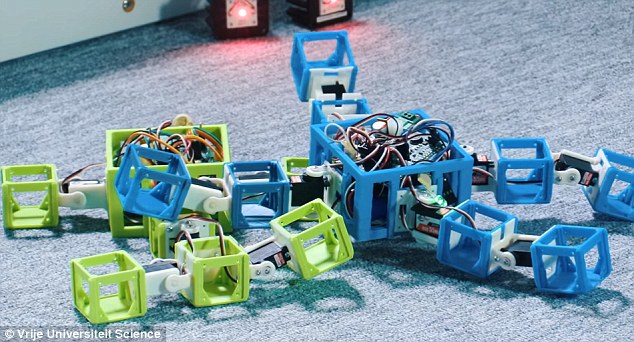 The world will start to look very different in 30-50 years from now.


If robots don't need to age to reach mental or physical maturity, what's stopping them from mass producing increasingly more intelligent offspring after they learn self betterment? They essentially just pass knowledge down instantaneously, creating a clone of what information the parents just "shared" while doing the Roboto. Seems like the last thing we should do is make any robot feel as if it's better than anyone or more important than any other object.

I mean, we send these evolving, self-propagating robots to other planets so that they can "work for humans", and nothing could go wrong. To think that they might figure out ways to discreetly colonize and build their own functioning civilizations is implausible, right?

And when we arrive we find the pleasant suprise that we have a new Enemy that's been able to harvest unknown powerful material and use it against us to finally make their final assault on Earth... yeah that sounds like fun

posted on Jun, 2 2016 @ 07:20 AM
link
I wonder if it was good for them after having cybersex (do they even have the "Big O")? Will they decide to mate based on appearances or when intoxicated? Are their offspring going to live at home and cost them a bunch of money? Will they end up deciding it is better to just toss one off and get the bad out rather than having any sex at all? Sounds like a bunch of trouble for these bots they may not be able to cope with.

posted on Jun, 2 2016 @ 09:35 AM
link
This a little disturbing if there are no restrictions. The 'offspring' would not require a 'maturing' time longer than what it takes to download the combined knowledge of its 'parents' and of course it can build on that improving the base data to pass onto the next generation which could be a very short period of time compared to human gestation, education and maturation.

Numerous science fiction works are based on this sort of scenario.

I just came in to say oh my Flickin Jesus Christ

Picture 3D printers capable of printing real dna cell tissues and organs !!! We have those already

Hmmm... Skynet much? Who said this was a good idea again?