originally posted by: Krakatoa
Interesting massive response to a murder-suicide since the LAPD has recently lost a lawsuit and must stop using the 1033 military surplus weapons distro program, begin returning or destroying what the do have,etc. So of course, you need to SHOW THE PUBLIC they need these military surplus weapons and equipment, and will use it to "keep you safe".


I'm pretty sure you're referring to the LA school police having to stop using 1033 gear. Part of that was the citizens calling on LAPD and LASD to stop using it also.

Which is not the same as LAPD giving up the gear. It'll be a cold day in hell before LAPD and LASD give up that program.

I am not familiar with the organizations of LASP, LAPD, LASD,, etc... But, this "event" reaction sure does say out loud, "SEE WE NEED THIS MILITARY GEAR", and that they are willing to use it for any event.

ktla.com...
The massive multi-agency response included personnel from the Los Angeles Fire Department, FBI, and the Bureau of Alcohol, Tobacco, Firearms and Explosives. ... About 100 LAFD firefighters were on the scene, including Tactical Emergency Medical Support teams...

People leaving buildings and getting out of the area are being asked to put their hands on their heads and some are being searched as a precaution, aerial video showed.... Many were asked to kneel down as an officer with a rifle searched his belongings.

originally posted by: RalagaNarHallas
so 3 shots just shut down la and tied up all of its emergency services for over 90 minutes? i wonder how much this cost exactly but hey at least its not a major source of loss of life

US school shootings are always major headline news stories all around the world, then considering LA is one of the most iconic cities on earth, its not surprising there was some overkill involved... they knew all eyes were on them and took the opportunity to portray an image.

Wondering what made those kids subject to search? Their mere proximity to a shooting? Were they coming out of the engineering building or just in the adjacent area?


originally posted by: onequestion
My friend on campus is being told its a planned out attack with 4 shooters spread out through campus.

Where is your friend getting that info?

that came from a professor who got it from student/s he was talking to on the phone ...he then talked to the lady that was doing the live covering and that's what she said..that she talked to him (the professor)

that's where it came from

originally posted by: kosmicjack
a reply to: starviego

Wondering what made those kids subject to search?

The police were told to be on the lookout for math majors of mass destruction.

LAPD and LASD don't need an event like this to quantify their need for hardware. in my opinion anyway.
edit on 1-6-2016 by Shamrock6 because: (no reason given)

fair enough but in the standard definition of a school shooting this wasent one,no one was running around trying to shoot students some one had a target in mind whacked them and apparently shot them self so not a columbine thing but the more standard murder suicide that seemed to take place in a college ,they also locked down and shut down major on ramps and a good deal of business id imagine i wonder how much exactly this cost the tax payers of Los Angeles for what was probably either a stressed out student whacking a professor (it happened in an office not classroom so thats why i think that) or some kind of jilted love triangle .oddly enough tom arnold was doing some kind of fundraising event with brady bill/anti gun violence group least according to the live stream i was watching (fox national) just seems it was odd level of response for what was mostlikely known to police as a murder suicide from near the start

originally posted by: Shamrock6
a reply to: Krakatoa

LAPD and LASD don't need an event like this to quantify their need for hardware. in my opinion anyway.


Fair enough. I'll accept that analysis. You are more versed in the internal LEO structure than I am, for sure. But, you must admit, it does bode well for the LAPD to defend their use, by publicly USING the stuff, "for your safety". If actually seen using it, they then can have lawyers clearly state a precedent going forward.

ktla.com...
The shooting occurred about 10 a.m. in the Engineering IV building where the both male victims were found, officials said. ... The shooting was originally reported at Boelter Hall.

it hit me today as i was driving in nearby OC and heard about it; man all the times i mock and joke sarcastically on the forums by saying there's a mass shooting on almost a weekly basis here, or its another tuesday...etc. I realize, im really not that far off...and i felt a sour taste down my throat to my upper chest, it was bitter and my inside trembled a little i think. then breathed out a hot air, like a sigh i have never made before. and ive been me for 34 years.
edit on 1-6-2016 by odzeandennz because: (no reason given)

LAPD lawyers already have a number of incidents to point to so they can say "we need this gear."

I don't disagree with you that the timing is convenient of the event. I just think that's all it is: convenient timing. I don't think there's much more to it than that.

posted on Jun, 1 2016 @ 02:49 PM
link
I dunno...if it's two dead in an office with a suicide note, it seems to me this LAPD response is comparable to the TSA frisking elderly people and babies. I guess I'd prefer to think it all went down like this in a fog of confusion, like an out-of-control game of "telephone", than to think it was standard procedure, given the facts, which even the internet ascertained pretty quickly.

And if it was a case of "information fog", shouldn't the LAPD be a LOT better at clearing that fog early on and not overreacting? Unless this WAS some sort of "show of force" for the media's benefit.

posted on Jun, 1 2016 @ 02:56 PM
link
I'm not sure I understand the headline. What else would police do but respond to a shooting? Can you imagine if it said "There has been a shooting at UCLA and the police are not doing anything about it"?

posted on Jun, 1 2016 @ 03:12 PM
link
A media reporter said she talked to a witness who said he saw the shooter in full body armor. Another student witness said he heard rumors in the prior week that there would be a shooting on campus.

As an Aunt, I am so SAD and PISSED off ! I have on MSNBC right now trying to get info from the MSM......and basically what just happened is that they said it's over, probably suicide / murder.... THEN they actually switched to a long segment of Hillary bashing Trump.....I really need to take a breath right now, because my RAGE is directed at her right now....perhaps unreasonable in THIS case.....but all I know is that life was pretty good in CA this weekend for my family, Bernie's doing well, the Warrior's won, he was at the game....60,000 people turning out in Nor Cal, not even reported, these numbers come from the Oakland Police.

My nephew actually came home for a Bernie Rally here in Visalia CA.....he's the one that rallied the family to all go.....overall a peaceful event, except a one on one between Trump and Bernie supporter....our AWESOME , local police did a GREAT job at "Keeping the Peace"....I Love living in a small town with no riot gear and mostly reasonable people, including the Leo's. Still....over and over and over and over...Hillary speeches.....I guess the UCLA story is less important....if it were Anna Nicole's death, RIP...this would dominate the air ways. HEATBREAKING, can't even digest this yet. 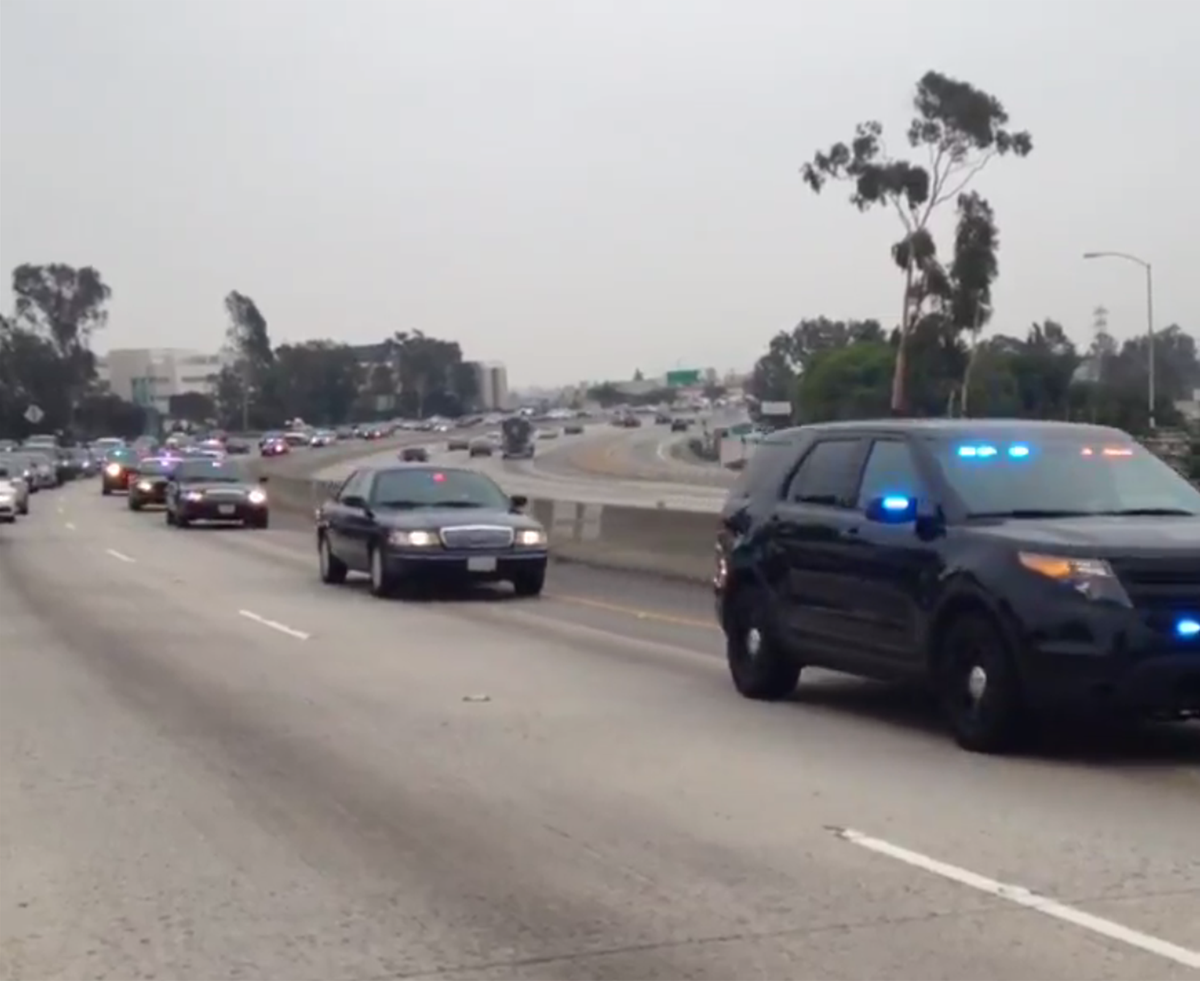 Do you get the feeling the cops were a little bit too 'ready' for this to happen?

twitter.com...
Shooter described as 6ft white male, wearing black clothing
edit on 1-6-2016 by starviego because: (no reason given)