posted on Jun, 1 2016 @ 01:20 PM
link
theories are ranging from double suicide,to active shooter/shooters and some guy on the live comments area keeps talking about isis but methinks hes full of it . just had a presscofrence where the police were nice and vauge and it appears the firemen as well as cops are in full tac gear (body armour etc) so still pretty unclear exactly what the hell is going on at ucla

originally posted by: RalagaNarHallas
comments from the youtube live stream link are all over the place ,any one got a count of number of gunmen?

the lady on the live feed says on twitter it says 4 gunmen in 4 different locations on the campus...but who knows how accurate this is? this info came from a professor who was talking to students on his phone, and they told him there a 4...has not been verified yet.
edit on 1-6-2016 by research100 because: added info

posted on Jun, 1 2016 @ 01:21 PM
link
Live a mile from there. Just got off the bus and headed home. Was going to get my phone repaired 1 block away from ucla a minute ago. Wilshire blvd shut down, buses on hold. 405 freeway backed up because wilshire is a major, major offramp and its closed off.

I hope all is well for your family during this crisis. Really. Keep us posted and updated when (not if) all goes well.

Yeah. Let's hope reporters are doing a better job of vetting info than that. But that's what is being said. Along with reports of other active scenes in the area. Which, I don't buy either. Yet.

If it is a murder/suicide -which is speculation only from the report of two bodies and possibly a note - but, if so, the rest of this seems like excessive overreaction to me. Or just, dare we say, practice? Drill?

Too early to tell I guess.

posted on Jun, 1 2016 @ 01:31 PM
link
Looking out my window I see 6 helicopters hovering over wilshire blvd to the west of ucla. Walking up there right now to see how far blocked off the street is. Figure westwood blvd shut down too.

Man the engineering center is right in the heart of uclas campus. 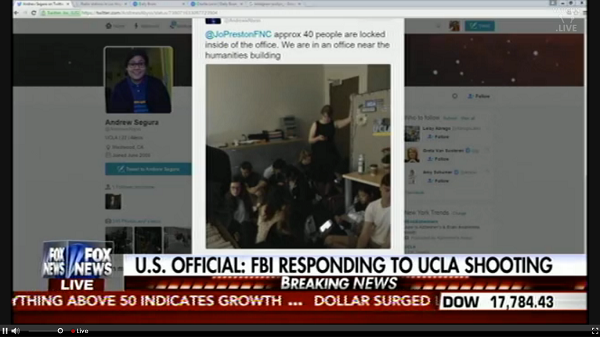 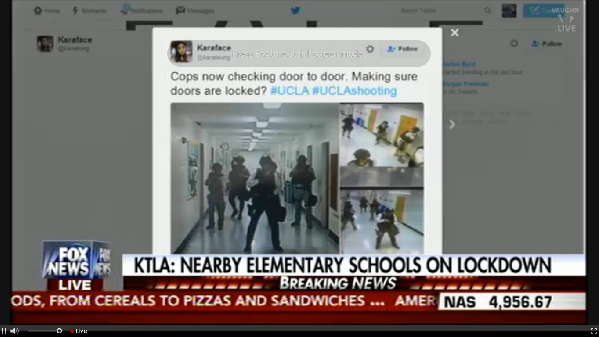 good grief I'm sorry to hear that, glad your nephew is okay, I really hope his girlfriend can just keep her cool and stay in hiding until its safe to come out. Then maybe afterwards they can go get icecream and take a nap or something...... gosh..... I hate how much society stresses me out these days. It's just the overly sick ones that ruin it for the rest of us.

posted on Jun, 1 2016 @ 01:38 PM
link
If the shooter fits this profile, you can be sure we are dealing with another Manchurian Candidate:

--previous history of mental health 'treatment' of the perp

--lack of any believable motive for the shooters' acts

--investigation taken over by the Feds, as represented by the FBI or ATF

--previous ties to the military by the shooter

--strange expressionless look on the shooter's face during the rampage, or an inability to remember the act afterwards, which I see as an indication of mind control

--early start time to the massacre, so the story will dominate the day's headlines

--a drill mimicking the shooting happening nearby or in recent memory

posted on Jun, 1 2016 @ 01:39 PM
link
News conference being conducted right now. Chief James Herren confirmed two dead and that they are still looking for the suspect/suspects. He's not ruling out murder-suicide.
edit on 2016-6-1 by theantediluvian because: (no reason given)

posted on Jun, 1 2016 @ 01:39 PM
link
Just heard a very muffled voice on the police scanner that said something about murder/suicide.

originally posted by: Grambler
I hope this ends peacefully. It could be connected to Milos event that was there yesterday that had a bomb threat called in on.

I was thinking it could be related to someone against Milo, as well... The closeness of the two events have sparked my suspicion. It's coincidental, but it could be unrelated for all we know.

posted on Jun, 1 2016 @ 01:42 PM
link
Interesting - when asked if one of the victims was the shooter, the Police Chief just said that it was a possibility but he's not sure.

Murder / Suicide could be plausible at this point. "KNBC - Suicide note and hand gun found"

posted on Jun, 1 2016 @ 01:50 PM
link
I tell ya...if I had a kid on campus or worked there and I found out that LE dragged this out into a massive overreaction/practice session for what was clearly a murder/suicide from the get-go - I would be PISSED OFF.

That's a kind of terrorism in itself, IMHO. Spreading fear for political gain. In this case, the gain is to the benefit and furtherance of the police state.

As they say, "never let a good crisis go to waste".


I'm sorry, but this is ridiculous logic. Two points...

1. People who decide to shoot up other people over nothing are almost always diagnosably mentally ill. They're quite distinct from people who kill for money, power etc etc. In most cases, these people experience a slow 'meltdown' of their mental health and eventually snap. People like that are extremely likely to have sought a medical intervention beforehand, and probably been prescribed an SSRI type medication.

2. SSRI type medications are prescribed and used the world over in essentially identical ways to America. Violent American acts 'linked' to SSRI use don't routinely occur elsewhere. I'll let you draw your own conclusion to that - but it isn't that Americans are being given some different version of the drugs.

The most likely cause of this event is poor mental health provision and easy access to guns. You can switch up the variables in any way you choose, but those two things are the constants in almost all of these stories. There's only one place in the developed world that has that potent combination, and it's where nearly all of these cases occur.

Edit: Ah, it's only a murder/suicide. Nothing to worry about then.
edit on 1-6-2016 by KingIcarus because: (no reason given)