Doctors at Hackensack University Medical Center in New Jersey confirmed Tuesday the birth of a child suffering from Zika-linked microcephaly, a condition wherein the child's brain and head are partially developed.

The mother, who is 31 but whose name was not disclosed, contracted the Zika virus while in Honduras and was admitted to the emergency room at Hackensack on Friday while vacationing in the United States. Tuesday, doctors delivered her baby girl, who was born also with intestinal and visual issues. Reports indicate she is the first child born with Zika-linked complications in the New York tri-state area.

I was reading where they were warning people about Zika if they travel to Disneyland this summer. How big of a threat is Zika to the United States? Right now it seems minimal but is their evidence that this could spread quickly? 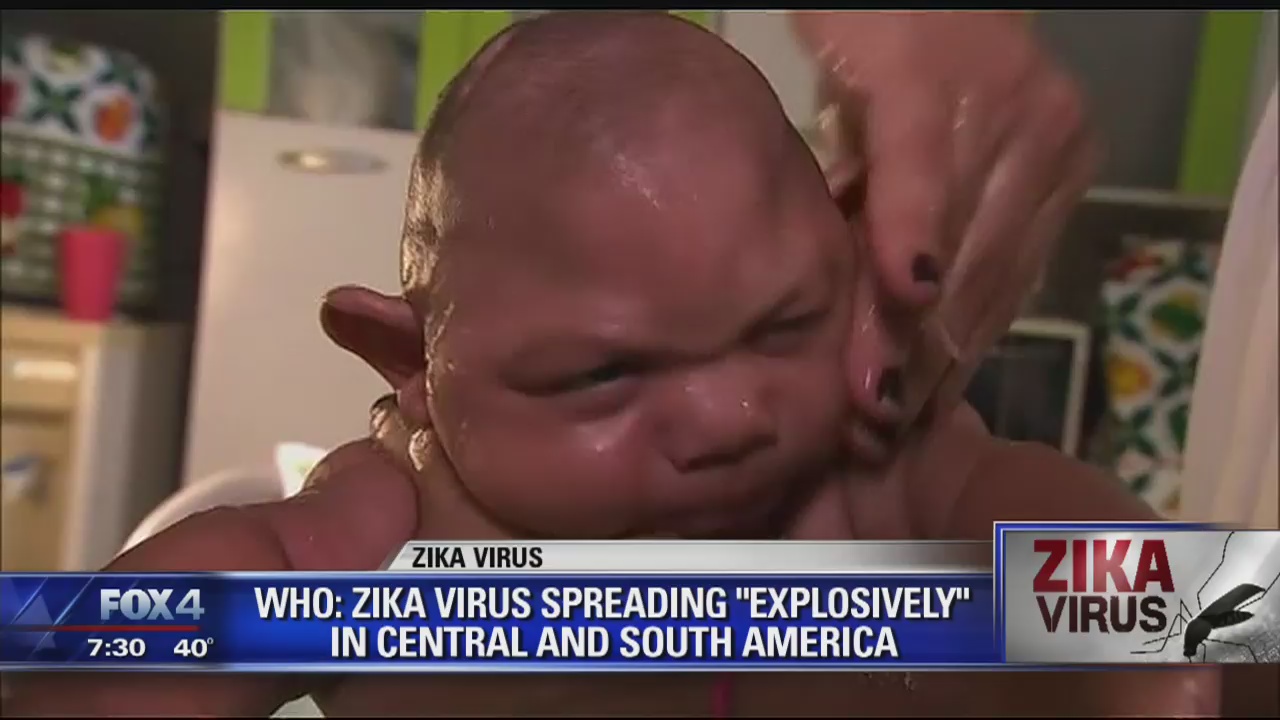 It makes me curious as to why the WHO would give its blessing for the Rio Olympics to go on as planned and why the proposed funding for preventing/controlling/addressing Zika to Congress went unmet.

Republicans were being blamed by the MSM for that, last time I looked.

For what you have quoted...

The mother, who is 31 but whose name was not disclosed, contracted the Zika virus while in Honduras and was admitted to the emergency room at Hackensack on Friday while vacationing in the United States


(Emphasis mine) Just happened to be "vacationing"

To expand on what you had quoted...

The child’s mother, who developed a rash for two days in Honduras but had no other symptoms until arriving in the U.S., was under the care of a surgical team led by Dr. Abdulla Al-Khan and Dr. Manny Alvarez, senior managing health editor at FoxNews.com and chief of obstetrics and gynecology at Hackensack. A neonatologist and pediatric infectious disease specialist, as well as nursing personnel, were on hand for the birth.

1) The indication that an alleged "doctor" whom is paid by a major news outlet immediately makes me suspicious...

2) The child’s mother, who developed a rash for two days in Honduras but had no other symptoms until arriving in the U.S., was under the care of a surgical team

Before I let myself to on and on.... In times long gone the Center for Disease Control (CDC) and World Health Organization (WHO) were essentially autonomous bodies that researched infectious diseases and viruses and left it up to the politicians to work out logistics.

Sadly (and as a parent and as a part of a marriage that wants to possibly bring another child into the world this pains me to say)... the CDC and WHO are nothing more than arms of political propaganda.

I've already made this assertion in various threads but I'll do it again... this summer the United States will receive a record number of alleged "unaccompanied minors" that will be force fed into public school systems and... as if by magic... the school districts that are forced to accept these alleged "unaccompanied minors" will have drastic increases of "mysterious ailments" (which can easily be traced back to certain parts of the globe).

You bring up excellent points, as currently there is a MEASLES (easily preventable by MMR vaccines) in Arizona, directly linked to the influx of illegals.

As someone who has studied my family history, I KNOW of relatives turned away from Ellis Island for "bad eyes." Conjunctivitis. Pink eye. Somehow in the early 1900s medicine stood on its own merits to PREVENT the spread of disease. Now, with political correctness infecting every aspect of our existence, it's ok to accept the sick and unvaccinated, and place them in our schools because you know...haters gonna hate.

But this is tragic. I hope we come up with a vaccine soon. This is going to be devastating for a lot of people, and produce a generation of handicapped children. Heart wrenching.

150 miles away there was a horrible leakage last year , dike broke ,the slag waste leaked into the rivers......how can the olympics NOT spread the zeka virus?
edit on 31-5-2016 by research100 because: correct dang spelling

The US will now provide complete care for mother and child forever.

The taxpayers are once again not given a choice in how the government spends their hard earned dollars.

posted on Jun, 1 2016 @ 03:09 AM
link
If you are pregnant and you travel to an area with a known risk for this virus, you are a moron plain and simple. Why the # would you risk it for anything what so ever.

dunno how that can be when from what I've read the zika viris has been around for yonks and only rarely ever causes any issues. This could be all just dis-info to cover up vaccines being being used as a depopulation tool.

originally posted by: flice
If you are pregnant and you travel to an area with a known risk for this virus, you are a moron plain and simple. Why the # would you risk it for anything what so ever.

According to the article, the mother lived elsewhere (where she contracted the virus) and came to the United States, just before giving birth..... on "vacation." So now we are all on the hook for the care/treatment/expenses for the child and by extension, the mother.

So who is the moron? Her or the rest of us?

posted on Jun, 1 2016 @ 08:14 AM
link
I can't blame people for not wanting to go to Rio for the Olympics. There are just to many risks with going to it. If it's as bad as some people think it might be it could be the last Olympics we have for a while.

We've had a few other cases of Zika in the US but that's all in southern states. I've read one case in FL the kid that has it now a teen. Has a long list of health and mental problem. They don't live long and if they do don't live normal lives.

I'm not surprised on the happened to be traveling thing. There are travel agency oversea that this is all the deal with. Getting a person their traveling paperwork as close to their due date as close as possible. It's been going on for many years now. I don't agree with it for many reason. But it's hard to stop cause US has no real laws on the book the prevent this.

posted on Jun, 1 2016 @ 02:37 PM
link
She wasn't "vacationing" as with many foreigners specially pregnant women comes to the US in their last pregnancy stages to deliver their foreign fetuses in the US so they can be born American citizens.

She brought the disease from her country and now the tax payers will be paying for the child medical needs.

So far the zika cases in the US has been from outsiders.

That is excellent! And curious. I wonder if they have some built-in immunity or something. Hope the researchers will be there drawing blood to check it out. We need a vaccine.

originally posted by: research100
a reply to: angeldoll

150 miles away there was a horrible leakage last year , dike broke ,the slag waste leaked into the rivers......how can the olympics NOT spread the zeka virus?

I feel so sorry for Brazil right now. They have spent so much money in preparation, and yet the water still has sewage in it, and the mosquitos are still hungry. One of the structures they build for a bicycle race has collapsed. They are in their second year of recession, and it's just a bad time for them.

Honestly, I think it's foolish too, but it looks like they will push on with it.

Is interesting, I know, I don't know about any type of immunity, but the Island does have a monetary fund set in case they have to provide care for children born with disabilities due to the virus, but because the mortality is very high the children will be provided until the age of 3 as the children born with malformed brains in the case of the virus seems to died very young.

Also it was speculation that only children born in south America were having the problems with the microcephaly and that the problem sprouted from Brazil and was not actually linked to the zika but made worse by the zika.

That speculation was squashed very fast because it had links to experiments or something like that in Brazil.

The source I read this was from a while back.

I have a Brazilian friend that traveled to Brazil last week to see her ailing mother, now she is been put on quarantine. But so far she is fine.

Hmmm, maybe Trump would get 100 million more votes if the news was honest and the head lines read "new Typhoid Mary is an Illegal Immigrant that came to America to give birth to anchor baby (knowing that she and the child were carrying a pandemic virus)".

She walked into a hospital and told the staff that doctors in Honduras told her "something was wrong with her bay's brain". She KNEW what she was carrying when she entered the country. She needs to be charged as an international terrorist for knowingly transporting a biological agent.

Or we could do like we always do and give her a house, food, allowance, citizenship, medical expenses, scholarships.....

People wonder why we are circling the drain.

She was in her last trimester and as per the news she knew her child had microcephaly so she came to the US no to vacation but to seek treatment for a condition that have no treatment and the chances of the child survival are minimal.

The cases of the children born with this condition as side effects of mother becoming infected with zika are very severe.

If the child survive he will be on medical care for life.