I saw her multiple times earlier and was wondering why she was able to come in and out of the barricade without the people blocking it stopping her..... I KNEW IT

He's talking about making a serious bid for Press Secretary if Trump is elected. It would be legendary.

Hell yeah it would!

Like I said. I can see he's replying to me but I don't read what he types. I see it my inbox says I have a reply or I see my name at the top of his post but that's it.

If it relates to what he's saying then good, because all I'm saying is the same thing over and over which is that I'm not reading his posts.

I'm not lying about that. I don't care what he has to say to me. I've read enough of his posts around here to know that I don't care what he thinks. He's turned into a some poser of a conservative who does nothing but attack the Label of "Liberal/Progressive/ect." even though a few months back he called himself a liberal. Which isn't important what he wants to label himself per se but I just see it as trying to suck up to the cool kids and be part of the crowd. Everyone he might disagree with is a Liberal and he's a Mouthpiece for Conservatives now I guess.

Personally, I'd rather talk to someone who doesn't apply so many labels to everyone including themselves. Not everything is so black and white. Plus it's always an argument of attacks with him. Which I admit can be fun sometimes, but I do try and discuss things here like a normal person too. But it's impossible with him.

Now I'm just rambling though...I'm sure you don't care either so I'll stop.

posted on May, 31 2016 @ 10:43 PM
link
I was kinda hoping that the ucla disruptions would at least be a bit more clever..overall fairly calm and coherent discussion so far though. the audio guy needs to sort out the interviewer guy.

Milo is funny as hell, really cool guy. I would love having drinks with him..and try to ignore him when he goes on his tangents. I dont agree with..hmm...about 25% of his views, but I respect he articulates them well, and backs up with facts.

I really wish my liberal counterparts would watch him though..he is more liberal lately than any progressive.

he goes off the rails when discussing trans though. thats when he crashes into a wall. 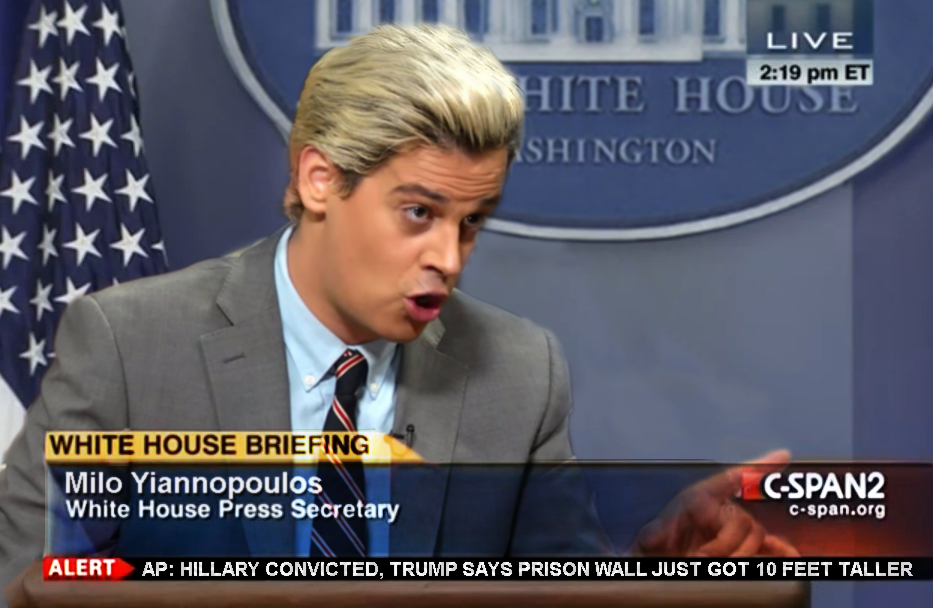 Good one. The press would go out of their mind.

Milo is actually a head moderator on the Donald Trump for President subreddit and has done a bunch of AMA's. Check it out.
edit on 31-5-2016 by Konduit because: (no reason given)


I may be developing a man-crush

An actual debate would have been more interesting to watch IMO. This seemed like just a bunch of ego stroking and big talk more than anything.

Too bad because he's more intelligent than that when he has to be.

I think he's more impressive when he's challenged on his opinions.

Well there is a Q&A, we shall see if he is challenged.

Is it worth the watch to start it again??? Is there anyone there that even wants to challenge him??? It seemed like it was just a crowd of people who were all fans of his.

Even the other guy on stage didn't seem to have much to say and he was supposed to be the opposing viewpoint wasn't he???

A pretty long line filed up for the questions. So far asking for elaborations on his stances. Last one was about social media and how conservatives can compete with sites like Gawker that mix humor into the news.

I might check it out. Thanks for the heads up.