The results claim that half the voters say Hillary should STILL keep running for President even if indicted !!!

Well whoever they "polled" must be half crazy.

Many people already think (know) Hillary supporters as well as full blown Democrats don't care if somebody running for President is a suspected criminal !!

Usually an indictment means there's overwhelming evidence and a conviction is likely.

I also suspect some Republicans may have been part of the poll.

Republicans would welcome a Democrat Felon as an opposing candidate.

Most continue to believe likely Democratic nominee Hillary Clinton is a lawbreaker, but half of all voters also say a felony indictment shouldn’t stop her campaign for the presidency.

The latest Rasmussen Reports national telephone and online survey finds that 43% of Likely U.S. Voters think Clinton should immediately stop campaigning if she is charged with a felony in connection with her use of a private e-mail server while secretary of State. Fifty percent (50%), however, think she should continue running until a court determines her guilt or innocence.


Among Democratic voters, 71% believe Clinton should keep running, a view shared by only 30% of Republicans and 46% of voters not affiliated with either major party. 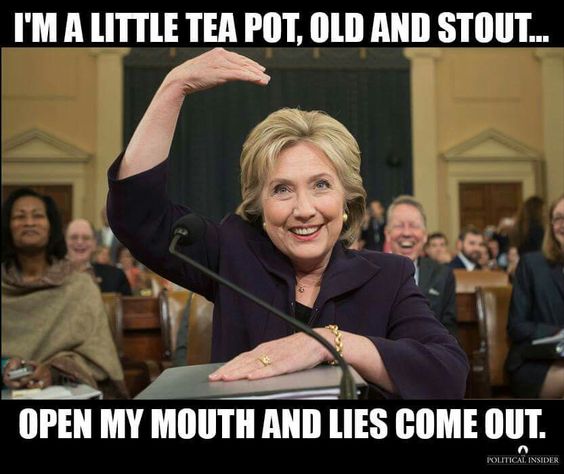 posted on May, 31 2016 @ 04:48 PM
link
Fact is, the American public can only vote for the lesser of two evils. How the hell has the so-called 'land of the free, and home of the brave' brought itself to this position?

What the hell is wrong with choosing a candidate from yourselves, and not have a candidate chosen for you to elect by the elite?
edit on 31/5/16 by elysiumfire because: (no reason given)

In fact it seems to be a prerequisite for the job. Of course none have actually had any actual convictions before.

The Primary elections separate the weak from the strong.

originally posted by: elysiumfire
Fact is, the American public can only vote for the lesser of two evils.

posted on May, 31 2016 @ 05:01 PM
link
Just shows that even if she is a felon, people still want her so they can still get free stuff from the government.
But not thinking that if she put so many lives in danger as SOS , how many more lives would she put in danger as president.
She is the worst woman in the government and only cares about how much she can get for herself and will screw over any of her voters to get what she wants.


once you see through the lies bandied around about her, no reason not to.
im english, i dont have a horse in this race but, its interesting to see how low the right wing press, on both sides of the pond go, to tarnish the opposition.
and how gullible conservatives/republicans are.

here we had an issue when the mail lied about the ex leaders father, among other things.

I am not wrong at all, not in the slightest way. Others may well be running, but the choice will still come down to the 'lesser of two evils'...Trump or Clinton. Then again, I'm not surprised by the idiocy of Americans when it comes to electing the most powerful person on the planet. I just hope Clinton gets indicted and Biden (ill or not) gets to be the democrat nominee. At least in that person, America can still hold onto the illusion.

If Trump or Clinton get in the White House, you might as well board up your windows.

I don't think she should and you know I'm a staunch supporter.

I don't happen to think she will be indicted therefore for now at least she should concentrate on sewing up the nomination and planning her strategy against Trump.

No worries for Hillary. The low-information-voters don't even know the meaning of indicted.; hell, the dead voters are smarter than the low information voters. Illegal alien voters* will vote as La Raza tells them to.

*Yes they vote, millions were registered during the riots during the Bush administration.

Good lord, who did they poll because that's insane! It's insane she has a team of FBI agents conducting an investigation on her and she's still running!

I'll tell ya, what a complete poop show this cycle is, Trump or Clinton... hesus. Trump, do I need to spell out what a disaster he will be? Clinton, I know I don't have to spell it out for anyone, she's terrible! But, she's the most establishment politician there is so she's in no matter what.

Imagine if Cruz, Rubio, or Sanders were under FBI investigation during this race? Holy crap! But! Clinton! She's get a pass because the elite fully support her. She literally is their lap dog when she should be a lap dog for the American people!

We can thank the elites for this mess, it's time they stopped have such easy control over our political system. Will Trump remove money from politics, end Citizens United, and begin the fight against corruption in DC?

The Cancer eating Away At American liberty is the power Money Has ovEr Our polictal System. They own Both Democrats And republicans. They are The Cancer!

If you believe all the lies and garbage bandied about I can understand that stance however she never put those lives at risk. The Benghazi hearings cleared it up that no one could have gotten there on time and surely you don't buy the nonsense that she slept through it when records confirmed she was in communication with the president and military higher-ups the entire time. So I'm thinking you may not know it. No lives were at risk.

Regarding all that wealth, it's funny how they don't live an elaborate life style and don't seem to take too much time off for vacations and stuff I'm thinking that they know they've been blessed and are grateful and spend a lot of time giving back. Contrary to right-wing press regarding the Clinton foundation that organization funds beneficial programmes here in the United States and around the world. Donations to the foundation go right back out into the world. Not into Hillary's pocket.

She's not screwing over the voters. She believes in this process she believes in her abilities and knows that voters who look into her background and not with a biased slant towards negativity will realize that her experience and her compassion for families and children, her record of standing strong in a hostile environment, her knowledge of world affaires and her experience as a diplomat are good positive qualities we need.
Not someone who's going to wing it and change course every week.
She has a plan for increasing jobs and incomes. Especially increasing incomes for women who still only make 70% of what men make.
She has a plan for making education affordable and a strong background in building awareness of the many government programs and grants to fund education for many who never considered themselves college material.
Hers is not a handout plan but hand up. Education builds a stronger job market . A strong job market builds a stronger economy. She has worked on programs like this since her college days. Look it up.
edit on 5312016 by Sillyolme because: (no reason given)

I am not wrong at all, not in the slightest way.

Your statement of "fact" was completely wrong. Others are running. Voters do not have to "vote for the lesser of two evils".

The Inspector General report last week proved she has been lying like crazy.