In a statement of facts filed with his plea agreement, Lazar admitted that from at least October 2012 to January 2014, he intentionally gained unauthorized access to personal email and social media accounts belonging to approximately 100 Americans, and he did so to unlawfully obtain his victims’ personal information and email correspondence. His victims included an immediate family member of two former U.S. presidents, a former member of the U.S. Cabinet, a former member of the U.S. Joint Chiefs of Staff and a former presidential advisor, he admitted. Lazar admitted that in many instances, he publically released his victims’ private email correspondence, medical and financial information and personal photographs.

He is copping to two of the counts and the remainder are being dismissed:

The United States of America, by and through the undersigned attorneys, hereby moves this honorable Court to dismiss Counts 1-4, 6, and 8-9 against defendant MARCEL LEMEL LAZAR, in accordance with the written plea agreement entered into between the United States and defendant, upon the Court's acceptance of defendant's guilty plea to Counts 5 and 7 in the Indictment.

In consideration of these charges being dropped, he has agreed to cooperate fully and truthfully with the government on any pending or future investigations. He has also been granted immunity from any further prosecution of anything described within the Statement of Facts.

It has previously been reported that two of the documents filed were done so under seal:

“There may be something in his plea agreement that he agreed to testify against another individual and the government does not want that to be public so in this case the plea agreement (or another document related to it) could be sealed,” Page Pate, a criminal defense attorney, told LawNewz.com.

From my reading of the Plea arrangement and all associated documents, there is nothing to specifically tie Guccifer in with the investigation in to the Hillary's use of the email server or corruption with the Clinton Foundation. That being the case, I am still quite curious as to what might be in the sealed documents to which the story linked has refers:

Another reason for sealing documents, according to Pate, could be that the paperwork relates to a search warrant, cooperation agreement or the testimony of a witness. If the information is at all related to an ongoing investigation, the DOJ would want to keep that information confidential, at least for now. Interestingly, the two documents are the only entries that have been sealed in Lazar’s entire criminal case.

Fox News had been in contact with Lazar but reports “he then suspended media contact earlier this month.” Lazar is facing charges including wire fraud, cyberstalking, identify theft, unauthorized access to computers and obstruction of justice.

Are we to infer that Sid Blumenthal is the "former presidential Adviser"?

I say he told the FBI everything he knows and the info is golden.

That would seem to be a "yes."

These counts are tied to his illegal intrusion into systems belonging to former U.S. government officials, including former Clinton adviser Sidney Blumenthal and former Secretary of State Colin Powell; they do not concern the FBI's Hillary Clinton email probe.

Not yet, at least…

You see, under the deal Guccifer – whose real name is Marcel Lehel Lazar – struck with the feds, he received a reduced sentence of seven years in prison and up to $500,000 in fines.

They had him dead to rights with each and every count. They would not have offered him a deal unless he had something they wanted.

posted on May, 30 2016 @ 01:23 PM
link
Hillary had to have contact with the white house. Would anyone be surprised that part of the deal was, Guccifer "forgetting" anything that has to do with Obama and the white house??

The US Attorney guide can be found at..

It is not a deal made lightly by the Department of Justice.

The agreement of a Judge is required.

Perhaps Mr.Lazar is required to testify to a Grand Jury?

So we have Mr.Pagliano and Mr.Lazar both with an immunity deal now.

originally posted by: IAMTAT
I say they didn't go through the effort & expense to extradite him just for this.
He's got the goods on Crooked Hillary.

I think you're spot on with this assessment.

If not Hillary, he's got the goods on SOMEBODY. No way they went through all this trouble to stick him with two charges when they could have skewered him.

"I can't tell [you] now. I can't tell because I want to talk to the FBI. It is a matter of national security. Yeah," he said. Pressed by Fox News, Lazar seemed to indicate the data was not connected to the ongoing FBI criminal probe of Clinton's server.

This little detail keeps being forgotten.

Who (and I'm talking criminals) wants to talk to the FBI?

If you're on their radar, you don't want to talk to them unless you've got something (that you can prove too, btw, because lying about something like this is bad enough but worse if you're already in it neck deep) that will lessen their interest in you.

Also keep in mind that Belgium initially blocked his extradition because they wanted him too, for much the same reasons he was in prison there in the first place.

And now here we are at him being granted a deal wherein most of the charges were dismissed and he was granted immunity.

They didn't offer him such a nice deal because their case was weak and their evidence against him was lacking, if that were the case they never would have got him over here against Belgium's wishes.

originally posted by: jadedANDcynical
They didn't offer him such a nice deal because their case was weak and their evidence against him was lacking, if that were the case they never would have got him over here against Belgium's wishes.

Interesting about Belgium, I was ignorant to the fact they were resistant to handing him over. Our guys wanted him bad, then. And it's because they want to make an example out of someone.

And that someone isn't Lazar.

I'd like to point out item #38 under the STATEMENT OF FACTS under the subheading Criminal History:

Apologies for the image, this is from the section which is not selectable text. Is this boilerplate or does this refer to something specific?

but don't let that get in the way of a good witch hunt, lol

Blumenthal is "Victim 3" in the indictment: 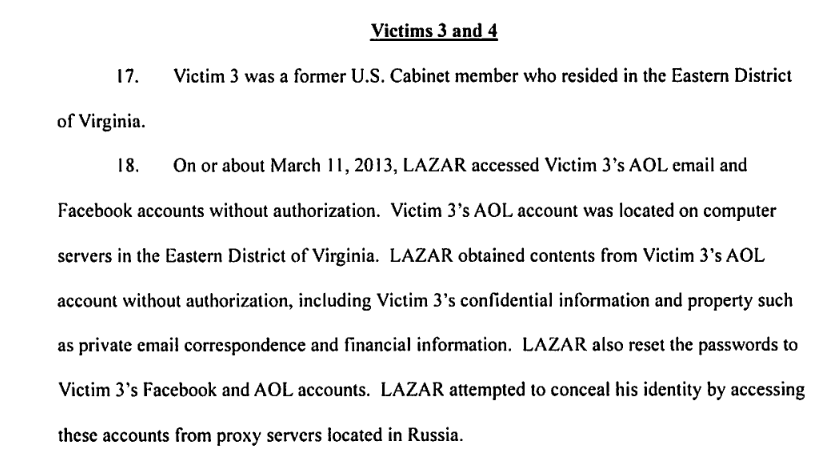 It always helps to know the players.

It is only reasonable to believe that his immunity deal is because his testimony is required in some other investigation.

A good analysis of the Pagliano deal..

The deal Mr.Lazar has worked out seems much more interesting.

"It is preferable as a matter of policy to punish offenders for their criminal conduct prior to compelling them to testify. While this is not feasible in all cases, a successful prosecution of the witness, or obtaining a plea of guilty to at least some of the charges against the witness, will avoid or mitigate arguments of co-defendants made to the court or jury that the witness "cut a deal" with the government to avoid the witness's own conviction and punishment."

Note "at least some of the charges".

Mr.Lazar is by no means finished giving evidence.

Your quote makes it clear that there may be many facts as yet unrevealed.

I imagine they have a few unpleasant surprises prepared for someone.

I stand corrected, thank you!