posted on May, 30 2016 @ 12:33 PM
link
Yup, my kid gets a lot of earwax build up and sometimes it plugs up. Ear drops for 10 min followed by a warm water flush with a syringe like this works great.

in the case of ear wax, the help could be in helping to break suction, or to soften it enough to move.

they also can help with pressure built up in the inner ear. i use a newspaper funnel myself....but im a redneck.

I've read reports that it's possible for hot wax from the candle to fall into the ear, so better safe than sorry

ETA - it's best to have someone to help with this. The last time I did it I had to manage on my own with a mirror so I could see how far down the candle had burnt. It's a bit scary lying on a bed with a flaming candle hanging out of your ear 'ole. It's essential to have a dish of water handy to douse it.
edit on 30-5-2016 by berenike because: (no reason given)

posted on May, 30 2016 @ 01:04 PM
link
I have this same problem all the time. I work in a loud environment and wear ear plugs, which pushes the wax in, making a plug. I have gone to the doctors to have removed in the past, and they used hydrogen peroxide. They had me lay on my side, and they filled my ear with peroxide. I stayed like that for 20 minutes or so, then they had me sit up and drained then they flushed it with a syringe full of hot water. they put a bowl under my ear, so as not to get water all over. They used lots of hot water, until the plug came out! Now I use this at home whenever my ears start getting that feeling in them. No suction, just flushing!
a reply to: sarra1833

posted on May, 30 2016 @ 01:32 PM
link
My wife's an audiologist. If the buildup does not come out with ear drops and water, don't mess with it any more. You could cause more damage than good. Go see an audiologist.

posted on May, 30 2016 @ 01:36 PM
link
Go to your family physician. They can gently wash it out. I had my right ear done that way a couple years ago when I lost all hearing in my right ear. They have a appliance that is used to squirt warm water down into your ear canal. Then it will dislodge the blockage. All done in less than 10 minutes at their office.

posted on May, 30 2016 @ 01:37 PM
link
In my neck of the woods in the UK the nurse tells you to put in a couple of drops of olive oil and put a cotton ball just in your outer ear to stop the oil escaping. Do this twice a day for five days and the wax will be soft enough to flush out.
Had it done a few times, it works.

I stay on top of my ears gunking up since i have dry flaky skin in my ears and it can soon build up but the back end of some tweezers and a bobby pin for getting it out are not standard medical issue but do work for me but i'm careful and don't dig too deeply as i find spending a few hours sleeping on one side will soften the wax and it will fall down a bit making it easier to capture.

Last time i had my ears done i'd pulled lord knows how much crap out and when the nurse did my ears i still had 7-8 ball bearing sized blobs come out.

We do the warm oil trick too and yes it does take few days.
Did you know that earwax is different depending on your ancestry.

I was digging in my ear to remove ear wax months ago, and I already had hearing problems in my right ear likely from firing weapons a lot, and all of a sudden I lost all hearing in my right ear, and it was painful especially when i opened my mouth, and I never got it taken care of, so now I only got one good ear be careful go to a doctor don't be a fool like me.
edit on 30-5-2016 by TechniXcality because: (no reason given)

posted on May, 30 2016 @ 02:31 PM
link
Walmart sells a kit that works pretty well for getting out earwax clumps in the ears. It is a little squirt bottle with some fluid in it. It costs about ten bucks I think, I know a couple of guys that used it to get the balls of wax out of their ears. They still had a hard time hearing their wives though. It doesn't help with selective hearing at all. 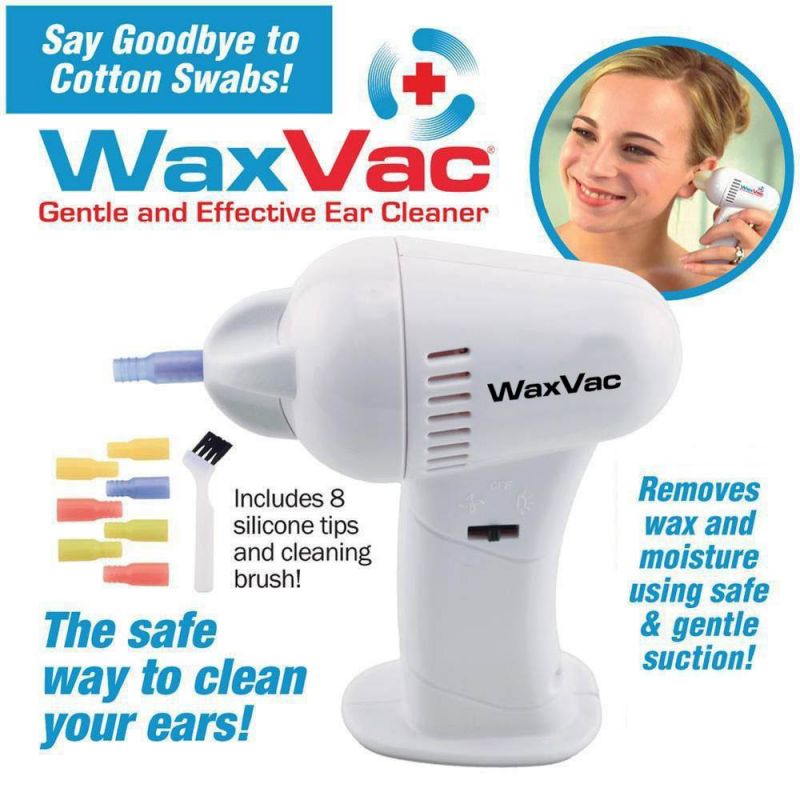 Just kidding, don't do that! I'd say if you have so much ear wax that it's a concern, sell something if you have to, or cut back on whatever you can to save enough to pay for a doctor. It's not worth potentially losing your hearing over $100.

posted on May, 30 2016 @ 03:26 PM
link
My husband had this happen a few years back, we were yea-shy of taking him to the doctor for it. First, if someone can help you, awesome, let them. They can at least eyeball your ear and visually monitor what's going on.

Second, I'd go for one of the ear wax removal kits with a bulb, that's what we did along with another thing. His massive blockage eventually came out after numerous attempts (and yes, it was HUGE and gross)
We alternated between the bulb and this doohickey to get it loosened up enough. I know you're not supposed to stick anything in the ear canal, but both ends of those things helped a great deal in grabbing & dislodging the wax after it was softened enough. Eventually, it stuck on the textured end, and came out in gobs.

posted on May, 30 2016 @ 03:40 PM
link
I'm not sure what it's called, but there's a method of rolling up a certain kind of paper material and sticking it in your ear and burning it. Apparently the burning effect draws wax out.


Theres no way it can work and even the hopi indian tribe who have nothing to do with it think its as real as donald trumps hair do.

I live out in the Chihuahuan desert, and its common here. We just use newspaper, though. You can see the "puffs" of air when pressure is released in the smoke. That's when you know its done.

Now, i m not fond of all curandero methods....but that particular one works.

I've seen some stuff, though. Its not uncommon to see babies with red thread wads stuck to their foreheads around these parts. LOL

I also have had really good luck with ear candles. You need somebody to help you out with them. When I use them, my Darlin' cuts an "X" in a paper plate, and pushes the hollow candle through it. I lay on my side with the candle in my ear and she lights it. The hot smoke from the candle travels down it and melts my earwax. I can hear it crackling as the flame burns closer. When the candle is less than two inches from the plate, she pulls it out of my ear and extinguishes it in water.

In the bottom of the candle, is usually an inch or more of collected earwax. Everything sounds much better from that moment on, until the next time I do it.

My hearing sucks. This helps.

I had so much blockage once as a child that my face was sore and I couldn't stop crying. The doctor flushed it out with a machine and some type of solution. It instantly helped. You probably dont need to go to the er, an urgent care Or doctor could probably do it in office.

Just to add a personal perspective...

I had the exact same problem, resulting from an infection that caused my ear wax production to skyrocket. The wax had become partially hardened, and I constantly felt as if I was underwater, or listening to things more with my eyeballs than my ears.

The doctor told me I would have to have my ears flushed out, but with the wax being as hard as it was, I would have to have it softened first. To that end, he bade me visit the pharmacy, and purchase a bottle of medical grade olive oil. It came in a small dropper bottle. The stuff worked best when warm, so I would boil a kettle, pour a shallow measure of water into the bottom of a cup, and let it sit for a bit to cool, before putting the olive oil in the cup to heat up. Then I would place a couple of drops into one ear, while lying on the couch on my side, being careful not to let the oil drip out. I would then do the same for the other ear.

This process over the course of a week or two, softened the wax, so that when I went to get my ear flushed out, it all came out relatively quickly. They used a little machine which fires pulses of water through a very small nozzle, to wash out my ear, and one of the waxen lumps which came forth was nearly the size of a 9mm bullet. It was actually a very pleasant treatment to go through. The oil was a must though. It never would have worked if it had not been for the warm oil treatment first off.