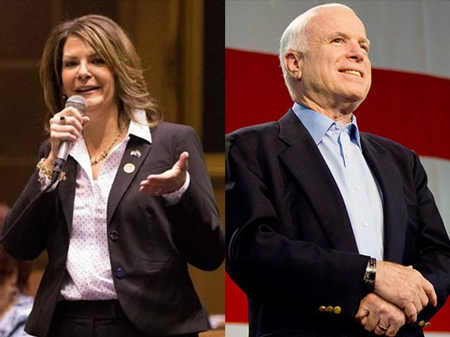 Here’s an interesting question, would you rather see the “maverick” John McCain (Hillary’s favorite Republican), in the Senate or Kelli Ward, a woman who believes in chemtrail conspiracies?

Taking a page from Trump's playbook, McCain’s campaign has labeled her “Chemtrail Kelli”, after she held a 2-hour hearing back in 2014 regarding the issue.

But the chemtrails hearing was hardly a one-time incident. In her short political career, Ward has flirted with the conspiracy-theory fringe by making appearances on 9/11 truther radio programs, advising citizens to stay vigilant against UN helicopters, warning against government "indoctrination," and proposing an unusual theory that the Affordable Care Act was part of a plot to force rural residents to move to cities.

She claims that she was only responding to the concerns of her constituents and hoped that actual experts might be able to dispel their concerns.

According to the video, “Ward’s bad judgment keeps dangerous company”, inviting Alex Jones into the mix. “Only aliens would want to do something like that”, Alex is quoted saying, making Ward’s belief in chemtrails appear to have no basis in reality.

She has denied believing in the theory herself, but a campaign spokesman had this to say about why it remains an issue for her to discuss...

"Conspiracy theories are intellectually implausible because they require secrecy about complex coordination on a massive scale. When incorrect information about environmental quality issues is causing enough consternation to fill up a town hall meeting, it is a senator’s job to connect concerned constituents with expert government officials to correct and clarify misconceptions."


Regardless of your belief, I find that statement to be logical. Currently, none of our elected officials want to take the issue seriously, because as McCain attempts to point out, you'd be considered "dangerous" in doing so.

Ironically, while not as involved as Ward, McCain has allowed the topic of chemtrails to reach the desk of the EPA after he forwarded the concerns of his own constituents, a move he could have avoided altogether. McCain only demonizes the notion of chemtrials when it's presented in the form of leverage.

Sen. John McCain's (R-AZ) re-election campaign on Monday mocked his primary opponent for entertaining constituents' chemtrail conspiracy theories. But it turns out McCain last year forwarded to the Environmental Protection Agency a letter from a constituent concerned about chemtrails, and asked the EPA to respond.

The road to (re)election can be brutal and demeaning, allowing one's notoriety and literal "wealth" of supporters to steer progress and ensure victory. At this point, I'll take Ward and her crazy conspiracies over some career driven, shriveled up beef jerky politician, who has done little to convince the country of his worth. He continually makes excuses for his position, accusing Ward and Trump of creating a frenzy amongst who he describes as, lunatic or crazy Arizonians.

McCain himself has suggested that Donald Trump's emergence as the party's presidential nominee could put his normally safely Republican seat in jeopardy this fall. "This may be the race of my life," he told donors at a private fundraiser, according to audio of the event leaked to Politico.

Presumptive Republican nominee Donald Trump held a rally in Phoenix last year that had McCain condemning some Arizonans as “crazies.” McCain said that Trump’s rally was “very hurtful to me,” and elaborated by explaining, “because what he did was he fired up the crazies.”


She doesn't seem all that bad and her ability to entertain the concerns of her supporters, reminds us of the reason we elect officials in the first place. If the people can be showed through research that their claims are unfounded, I would consider that a good example of the government doing it's job. Next on her list, Agenda 21.

Ward, who represents a largely rural district in the state's northwest corner, is particularly concerned about a UN agreement called Agenda 21. Designed to promote sustainable development worldwide, the compact is nonbinding and has never been approved by the US Senate.

Nonetheless, Ward co-sponsored a bill in 2013 that would prohibit Arizona from complying with Agenda 21. As she explained at a hearing, Agenda 21 wasn't just about sustainability—it was about breaking the back of rural America in order to coerce citizens into moving to cities.

"I'd go so far to say that what we're doing with health care relates to Agenda 21 as well, because we'd like to see those rural hospitals close and fold under the pressure of not taking money from the federal government to hold them up," Ward said.

"Because when those things close, that does push people toward more centralized living in high-rise apartments [and] not in the rural areas, which tend to be freer thinkers and freer livers."

I'd love to see more like her in the Senate as long as she keeps her head on straight. There is a lack of support is Washington regarding a variety of unconventional issues related to our health and wellness, on top of how the government conducts it's own business. With Ward in the Senate, she may be able to bring some of these topics to the table.

posted on May, 29 2016 @ 01:13 PM
link
Id vote for Kelli..
Why would I vote for someone who pushed for legislation that banned looking into his own history as a POW?

Lets get her in there and hopefully she'll be the spearhead for a NEW govt dept .. The D.O.C

Kelli seems to be playing the same game as Trump: creating an "outsider" image by appealing to people with "fringe" ideas. Don't trust her; she's trying to play you.

Many scientists have plenty of ideas to increase rainfall by artificial means but the tin foil hat wearers are convinced to the point of no return.