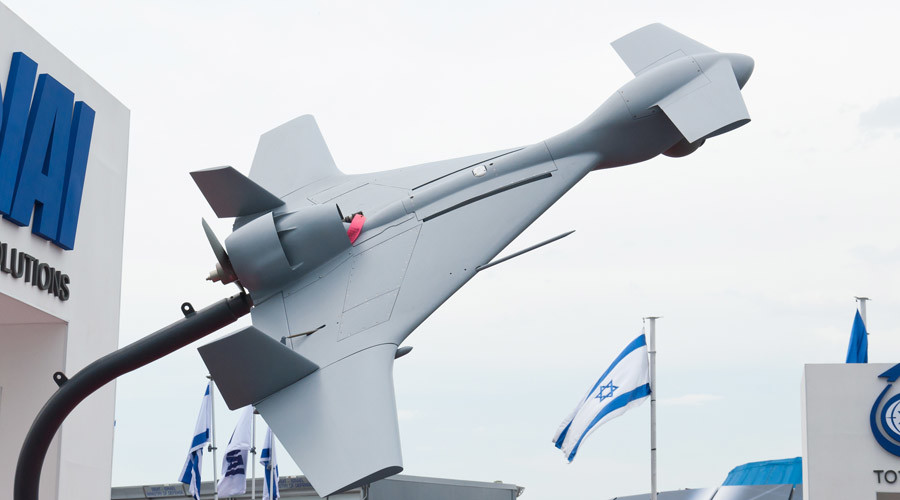 Kamikaze drones offer a relatively low-cost form of air support for ground troops who do not have the backing of manned fighter bombers. Footage posted on Youtube on April 4 by a pro-Azerbaijan group shows the drone in the air before sharply diving toward an apparent target below.

It disappears behind a ridge and the video does not show it striking its target.

Azerbaijan is one of the three countries known to use Harop drones, alongside Israel and India.

Fighting periodically breaks out between Azerbaijan and Armenia over Nagorno-Karabakh, a self-declared Armenian republic that lies within the internationally recognised borders of Azerbaijan.

Well, before all the Marines come in to explain they been using the Switchblade for years, don't forget that the Pentagon classifies it as a missile, "loitering munition" . Lets just get that out of the way for now.

So the first suicide drone was deployed and there was no mention of it nearly two months ago when it happened. I just felt that I would mention it, as this is technically a first for official UCAV's .

And just yesterday, Russia announces they plan to get into this market.


One of the drone models used by Russia is to be modified to be used as a kamikaze, Russian media said. Such drones can be used to suppress enemy air defenses or to provide tactical-level air support to units in the field. The project is based on a model already in use, the source added, refraining to provide further details.

I find it unusual that Armenia and Azerbaijan are in a constant state of back and forth war over a small parcel of land and it carries no value in the media. Nobody on broadcast news ever reports about that area EVER.

Some believe that Azerbaijan is a NATO proxy, even though Russia arms both Armenia and Azerbaijan. Who knows, I just thought it was neat to see this drone in use for the first time.
edit on 5/29/2016 by AmericanRealist because: fixed video

I'm surprised by nothing anymore...


5.8 Million Israelis Get 100 Billion In US Tax Dollars While American States Are Falling Apart
www.abovetopsecret.com...
edit on 5/29/2016 by awareness10 because: (no reason given)

originally posted by: awareness10
hmm... so This is what the Israeli Gov have been using the United States Taxpayers money on.

I'm surprised by nothing anymore...


5.8 Million Israelis Get 100 Billion In US Tax Dollars While American States Are Falling Apart
www.abovetopsecret.com...


and who are you going to vote for, just not bother voting?
Same old same old

It's what the US government do, it's what you do by proxy

The Armenians and the Azeris have been fighting over Nagorno-Karabakh since 1988. The undeclared war ended in 1994 with an Armenian victory, but there have been numerous clashes since then. The recent fighting has been the worst since 1994.

I get the occasional update about that from Armenia News. I suppose it is not as historical or renowned as the Israel/Palestine and North/South Korea divisions which are always on the news. But these guys actually keep on fighting, and the Geo-politics involved seem controversial enough. Maybe the situation is so complex they don't know how to spin it??

I just think it would be interesting to hear more of this affair.

posted on May, 29 2016 @ 02:14 PM
link
a reply to: AmericanRealist
I seriously doubt this was a kamikazi drone as there was no sign of any impact explosion. It's probably more like they lost control of the drone and it crashed.
If any power were to think of using drones for kamakazi attacks thet wouldn't use drones costing millions of pounds to produce. Oh yes, they look cool and sleek but all you need is wings and an engine (depending on the munnition payload) you could build one for a couple of hundred dollars. Heck I've been building radio controlled aircraft, oh sorry, drones all my life.

Harop is a loitering munition (LM) system developed in Israel by the MBT missiles division of Israel Aerospace Industries (IAI). The unmanned combat aerial vehicle is also known as the Harpy-2 loitering munitions missile. The drone loiters over the battlefield and attacks the targets by self-destructing into them.

The Harop has been developed to perform suppression of enemy air defence (SEAD) operations. The munition system measures 2m in length and has a wingspan of 3m.

The Harop system consists of the munition units, transportable launchers and a mission control shelter, which provides real-time access to control the Harop by a man-in-the-loop.

Unlike other UCAVs that carry explosive warheads, the Harop itself is the main munition. The munition system engagements can be approved or the attacks can be aborted using the controller.

The Harop missiles can be launched from various transportable platforms including sea and ground based canisters or air launched to navigate towards the potential target area. It can be launched at any angle, at a horizontal or vertical trajectory. The sealed container ensures it copes with harsh battlefield conditions. The launcher has a fuelling system to provide all-time readiness.

I mean bro, just watch the video.The drone suddenly increases velocity and goes straight for a target behind the horizon. There is no disputing this, it is on record. the target of course is where the confusion may lie. Supposedly a bus loaded with volunteer Armenian soldiers. It is clearly the same drone you can see in the video whe matched to images of it.

Basically if this thing is in the air as we saw, it is because they WILL crash it into something. I would like to state though, that it was believed Hezbollah used a drone for this purpose and successfully hit a Israeli naval vessel causing a massive fire that required it to return to port. But later reports determined it to be a missile.

right I was not even aware of that. Whats funny is the image they show is of the drone used by Azerbaijan as demonstrated in my OP. I think it was interesting that this was the first technical deployment of such a weapons platform but it barely registered on the 'media' radar.

Well you caught on to it. And did a good thread on it too👍😊

I was actually going to do the RT article, but upon researching the Harop, found out about this deployment and found it to be much more interesting. Figured throwing the RT article as a footnote would help. The next question is, can we equip these with tactical nukes??

A flying kamikaze nuke would be hard to verify origin without analyzing the core samples used after detonation. They are designed to avoid radar detection and will be all but obliterated afterwards. That would really suck!

I was wondering this too. A thought some time ago occurred to me if they could make a missile "Stealth". Not that it's easy to take down a bunch of incoming ICBM's. But to build a stealth like platform for them.
This Kamikaze Drone seems fitting for future endeavors on the matter. You still need to be close to launch. But I see this getting ugly if equipped with a TAC-Nuke indeed. 😐

To add, or Not To Add: can't reword it... but exactly as you just said😊

The AGM-136 Tacit Rainbow was the first true "harrasment weapon" I believe. It was designed to be launched by both fighters and bombers, or from ground launchers, fly up to 250 miles (the air launched version only had a range around 50 miles or so), either ahead of, or with a strike package, and loiter waiting for radars in the area to activate. Once they did, it would dive into them and detonate the warhead, destroying them. It was finally canceled in 1991 due to budgetary reasons. It had completed testing but was never put into production.

It was never designed for a nuclear warhead, but there is no reason a system like this couldn't have one put on it.

Each unit was to cost around $200,000 that is a relatively low price tag. I cat imagine why it was canceled before production with budget cited as a concern. For the time period that seemed a reasonable price tag right?? By comparison the Harop is probably half a million on the conservative estimates.

In any case, while researching more on the switchblade, I just found out they have a variant that will be deployed on all NAVY subs very soon.


AeroVironment is particularly coy about divulging Switchblade's cost. Estimates range from $40,000 per unit to as high as $150,000, though. My own estimate implies a unit cost of at least $70,000, and perhaps more.

Last week, AeroVironment confirmed that the Navy intends to deploy its new Blackwing unmanned aircraft system (so new that it doesn't even show up on AV's website) across its fleet of both manned, and unmanned, submarines. And it's important to distinguish this announcement from the constant stream of "technology demonstrations" that come out of the military-industrial complex.

This isn't that. This is an actual deployment.

I would like to know more about blackwing, give it up Zap, I know you got the goods

They were far over budget by the time it was cancelled in 1991. Between 1982 and 1991 the total program cost was up to $4B. The preproduction verification phase of the program budgeted $84M, but the total cost came out to $251.6M.

hmm, I suppose there was better technology on the horizon anyways and they figured they could just use Israels smaller Harpy drones as well. They were selling them to China in '94 anyways, much to our protest.

posted on May, 29 2016 @ 08:31 PM
link
Im just wondering why it cant it have a couple of capsules of anti personal bomblets under the fuse.