Then we have the whole issue of what "our" military war machine has been used for since most every war (except for few besides the Revolutionary War and (un)Civil War).

Until an impromptu sarcastic rant on the phone last night, it just never it just never occurred to me the reality of the underlying harshness of what Memorial Day represents, at least to most of us, or what it shou8ld represent, anyways.

PLEASE DO NOTE: THIS IS NOT A "DIS" AGAINST VETERANS. My respect for them, is why I never contemplated this until now.

You see my usual national tragedy of a holiday for many years has been July 4th, considering everything it represents today amounts to the worst joke ever, in practice, when reviewing the average "Americans" practice of it. Bill of Rights obliterated, notions presented in the Declaration of Independence in view of todays Federal Government the sickest darkest joke of all time, perhaps.

We all beLIEve, until we learn the truth.

Back to basics, categorically, holidays are CELEBRATED.

How shall I, you, we celebrate this holiday?

I say, if we dont have a boating trip lined up, we throw a kegger. Like the usual "Americans" approach to celebrating the 4th of July, we all should go and light Chinese fireworks, but only in between competing with each other in marveling in our own magnificence. At least until the drama scene unfolds and ruins the "party".

At this point most of you might want my head, yet the irony here is this is my version at an elaborate attempt at restoring some sanctity to the entire notion of this Memorial Day affair, and its annual celebration.

Although I will ask the question, assuming we're not all expected to CELEBRATE it, why does anyone except veterans even get the day off?

Meanwhile, in answering the potential great debate insinuated by my headline...

"Freedom" = Imperialism: It's in the Language

The Media is Pro-Military-Imperialism Biased

CoBaZ
+19 more
posted on May, 29 2016 @ 12:44 AM
link
As a Vet I may not like what your implication is here, But I do appreciate you having the right to say it and if my time in service proudly sworn to the Constitution and unfortunately following lawful orders of those who were put over me in any way shape or form helped allow you to say what is on your mind, then it was time well spent.

Your idea about what this day commemorates is flawed.

Whether celebrated or not, I guarantee few involved even contemplate the meaning of the vast majority of all those vets dying. As said (in many, many previous posts), war is rarely about everyday peoples "interests", therefore, like the 4th of July, its an annual national tragedy.
edit on 29-5-2016 by IgnoranceIsntBlisss because: (no reason given)

No more than a funeral can be a celebration of life.

It's not called "Conqueror's Day"..

This is an agenda and a part of our history which needs to be challenged and exposed.

However, its rarely mentioned due to political correctness and people's "safe spaces".

Our government has embarked on a policy of non-stop wars of aggression since WW2.

From as far back as Korea to current day Syria.

And the men and women who lost their lives did so serving a war-for-profit Military Industrial Complex which is slave to civilian masters controlled by special interests.

If anyone needs to be disarmed, its the US government. From pre-emptive wars of aggression based on lies to overthrowing entire sovereign nations, they should be tried for war crimes and crimes against humanity.

From the Nuremberg trials to the Washington DC trials.

With regards to the men and women who voluntarily served, they should not be proud. The should feel embarrassed and ashamed. They should have some remorse and regret.

"Just following orders" is no excuse. We're educated and mature enough to know that what we've done is horribly wrong and morally reprehensible.

If as Americans, we really want to support our troops, do so by encouraging them to resist as is their right under the Laws of Land Warfare and the Geneva Conventions. 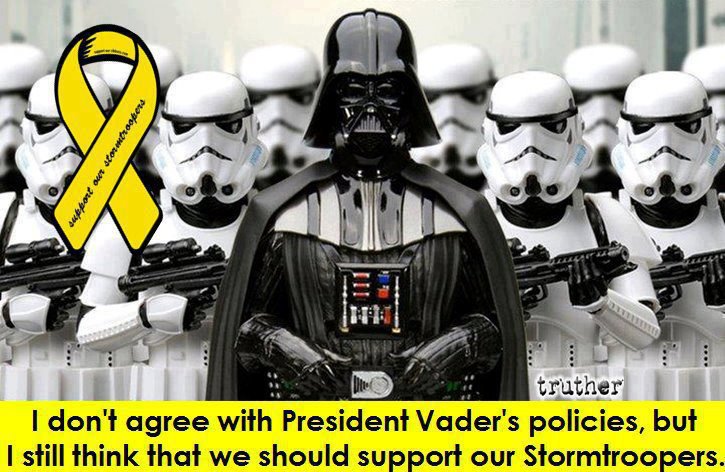 
IkNOwSTuff
+4 more
posted on May, 29 2016 @ 01:01 AM
link
Not being able to say anything against the troops is quite possibly the most sickening example of our PC mindset in practice.
The 1st and only time Americans fought for their freedoms and security was against the poms 200+ years ago. Every time you have been to war since has been to protect or expand corporate interests.
(Not including ww2 in the above example)

I feel sorry for soldiers from all countries, their hearts are in the right place but they are putting their lives on the line and have been brainwashed for a small group who profit from humans killing other humans.

Well if you replace Heaven with Valhalla celebrations aren't quite as grim.

posted on May, 29 2016 @ 01:08 AM
link
A poster with the spirit of the old guard here raising real issues your constitution was further trampled by the Senate today with the passing of the Intelligence authorisation act and hundreds of US special forces are now deployed in Syria,yes there are things to think about other than where little Johnny takes a dump,football and Kim Kardasians ass.

It's not called "Conqueror's Day"..

Perhaps it should be!

This is an agenda and a part of our history which needs to be challenged and exposed.

However, its rarely mentioned due to political correctness and people's "safe spaces".

Our government has embarked on a policy of non-stop wars of aggression since WW2.

From as far back as Korea to current day Syria.

And the men and women who lost their lives did so serving a Military Industrial Complex which is slave to civilian masters controlled by special interests.

And with this in mind, one can easily look back to any number of wars since the Civil War. If hostilities began at anothers hand we can be sure that the weapons came from here and set ups to incite the patriots back to war again.

I understand your sentiment, but I think you may not be seeing the forest for the trees.

Memorial Day, as I've always understood it to be, is about honoring those soldiers who served and those that served and died to defend the United States.

While its true that our "leaders" may have sent our troops into harms way for questionable reasons, ultimately the soldiers have served honorably.

Memorial Day is not supposed to be about celebrating specific military operations but about honoring the specific people that put on the uniforms in general.

Nowadays it's easy to complain about Iraq or Vietnam, but it is also true that Japan blindsided the United States via Pearl Harbor and in the 40's ther Nazis did get some of their subs very close to the East coast of the United States. While some military campaigns may be questionable, some are not. The one common thread is that the U.S. Soldier is reliable and have made tremendous sacrifices over the past 240 years.

Do people have BBQ's on Memorial Day? Yes.

Do some people not understand why they are celebrating? Yes.

Do some people celebrate IN HONOR AND IN GRATITUDE of those that preserved our right to do so? YES!!!

If you feel guilty because the United States dedicated a holiday to those individual men and women that have secured our safe passage thus far.... I suspect that is more an issue with you than with everyone else.

originally posted by: IgnoranceIsntBlisss
So then, it isnt celebrated?

Whether celebrated or not, I guarantee few involved even contemplate the meaning of the vast majority of all those vets dying. As said (in many, many previous posts), war is rarely about everyday peoples "interests", therefore, like the 4th of July, its an annual national tragedy.

The 4th is a celebration of our nation's independence from England. Hardly a national tragedy. What are they teaching you kids these days? You seem to lack even a basic understanding of our holidays.

posted on May, 29 2016 @ 01:32 AM
link
Well you have confirmed many of the concepts I declare to be CELEBRATIONAL, so no argument there.

But the whole issue of what most of the wars have been about is the entire issue behind what I claim to be an annual national tragedy.

As such, I declare, more people than I should take more issue in general about what "our" entire national history is ALL about (EMPIRE).

And again, why does anyone outside of veterancy get the day off, if not to be a celebration? You haven't convinced me.

So then, please describe to me the party you were ever at, in your entire life, that the party had anything to do with that (independence from England; freedom, liberty, etc)....

edit on 29-5-2016 by IgnoranceIsntBlisss because: (no reason given)

Perhaps it should be!

Now your twisting it...
Here's the day your looking to criticize..
Victory Day

So then, please describe to me the party you were ever at, in your entire life, that the party had anything to do with that (independence from England; freedom, liberty, etc)....

Man, you must have had a terrible childhood.

posted on May, 29 2016 @ 01:53 AM
link
We as warriors prefer quiet respect . I guess the day off started the celebrations.
Respect for the dead ,Live vets have a day.

Memorial day honors those who fought so we would have the freedom to say only politically correct things.