Looks like they are stressing the issues, not just Trump.

Maybe quite a few Latinos are with Trump because they are here to work and do it the legal way.

Latino is not a guaranteed Democrat vote.

Latino groups have criticized the Democratic Party for relying too heavily on Republican Donald Trump's inflammatory comments on illegal immigration to drive Hispanic voters to the polls, calling instead for the party to do more to address Latino concerns, according to meeting notes seen by Reuters.

"(W)e cannot rely on Trump as that will set us up for failure," according to notes summarizing a meeting on May 2 between Democratic Party officials and representatives of several Hispanic advocacy groups.

"Our values… need to be uplifted," they continued.

Hispanics make up around 17 percent of the U.S. population, making them a critical voter group in what is expected to be a tight race between Trump and the Democratic nominee.

Judging by all the violence at his Cali rallies I'd say the Latinos there have some issue with Trump. Guess we'll wait and see if any numbers of who voted is broken down after the primary.

You're going to make a judgement call on tens of millions of Latinos on the actions of a few hundred? Cool!

Trump will pay for advertisement to push them to vote 3rd party or write in Sanders. Every single Sanders voter that doesn't vote Hillary is a vote for Trump.

The landslide this is going to become once both nominees become official will be true entertainment.

posted on May, 28 2016 @ 05:00 PM
link
The vast majority of Hispanic people I know, as in those who are either naturalized, are here legally and have no vested interest in illegal immigrants... well they most all are against most everything Democrats stand for with regards to illegal immigration. They want no amnesty or fast path to citizenship for illegal immigrants. They all favor Trump as well.

I work in construction, in California, if that means anything.

You can't deny Latinos in Cali are protesting him or that Mexicans don't like him much either but there are also polls to lean on if we want a bigger picture. Some polls says he isn't doing well and others may say otherwise. I dunno, but with his rhetoric I can understand why he may not get their support.

He doesn't need to get a majority of their support. He only need garner 25-30% for it to seriously become an issue for Hillary.

originally posted by: Arizonaguy
a reply to: Swills

You're going to make a judgement call on tens of millions of Latinos on the actions of a few hundred? Cool!


I'm going to make a judgement call that Latinos don't like cowards. Trump backed out of the debate with Bernie you know. 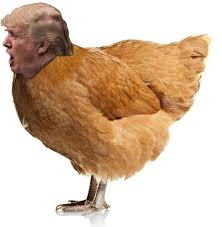 originally posted by: Teikiatsu
How many of them at those rallies are actually legal, voting citizens?


The constant waving of the Mexican flag should give you a rough idea...

posted on May, 28 2016 @ 05:10 PM
link
You mean the left will have to at some point form a semi-intelligent argument against Trump?

Just ignorantly throwing around terms like "racist" and "hateful" and "bigoted" only applies to the lowest common denominator in society.

In general, the left fails to understand many legal immigrants will support immigration reform, the wall, stopping the influx of illegals as they came here and went through the system, paid their dues and feel everyone else should do the same.

My wife is an immigrant, went through the entire ordeal for years. Did it all legally. She hates the idea of illegals walking across the border simply because they were born in a place where it's convenient. It's actually quite disrespectful to all the immigrants from elsewhere who come legally. Mexicans are the most racist, arguing they have the right to waltz across the border and take up a huge percentage of immigrants to this country simply because they border us, where as any true diverse immigration policy would take 5% from Mexico, 5% from Costa Rica, 5% from Brasil, 5% from Russia, 5% from Japan and so on.

What is not diverse and what is racist is Mexicans dominating the number of immigrants we receive, legal and illegal, annually. If they argue equal opportunity and everyone should get a chance to come live the American dream, it requires immediately slashing the number of Mexicans coming in and increasing the numbers from elsewhere. But they won't like that. It's only about them.
edit on 28-5-2016 by MysticPearl because: (no reason given)

Could be the MSM is casting the illusions.

Every Hispanic I know (who votes) is voting for Trump.

I live in Arizona.

Trump is going to win in a landslide no matter who his opponent is.

That is not an endorsement, it is simply a sound prediction; and an indictment of political "experts".

Well we have a thread doing that based off two people talking about how pro trump they are.

You gonna go in and say the same there?

I know a handful of Mexicans who'll vote Trump but they'll never admit it to most of their friends.

I do know more European immigrants here. Italian, Serbian, Bulgarian, then a few Russians and every last one of them who I've talked to about Trump is voting for him.

Why? They went through the process. Paid their dues. Why should Mexicans be the only ones who don't simply because they're in walking distance?

posted on May, 28 2016 @ 05:22 PM
link
I don't think Latinos are relying on Trump-bashing to form their opinions, anyway. There's plenty of reason for them not to support Trump besides any bashing people may do.

posted on May, 28 2016 @ 05:23 PM
link
just like the women folk, the latino folk vote just like the rest of us, and pandering is as offensive to them as anyone else

why is this news ?

It's sucks we have to pander to cultures, sub cultures, ethnic groups for votes.

That being said, I see TONS of Hispanics/Latinos on Twitter, YouTube, all over the net onboard with Trump. They can't stand the Illegals or the Mexican flag wavers either.

They know who Trump has employed. They know his record with them. And see through the lies that are spewed 24/7.

Truth comes forward the more you try and stifle it and that which you resist....PERSISTS. Law of nature.

posted on May, 28 2016 @ 05:25 PM
link
Lol man guess since you all know people who are going to vote for trump it must mean he is going to win in a landslide! It is almost like you would choose to be around people who think like you....