Donald Trump's Psychology: What Matters and What Doesn't

posted on May, 28 2016 @ 08:57 AM
link
Webster Tarpley, of World Crisis Radio and The Tax Wall Street Party fame, has gathered and presented a lot of information, speculation and putative psychological evaluations of Donald Trump recently.

He lists ten different abnormal psychological conditions that are alleged to be revealed symptomatically in the behavior and pronouncements of Mr. Trump. I, myself, started one thread in this forum speculating on the possibility that Mr. Trump might be afflicted with Obsessive Compulsive Disorder. These hypotheses are not being flung around at random. There are real reasons for such speculation.

I'm not convinced, however, that such speculation, no matter how well founded, is a fruitful line of challenge to be pursued against the candidacy of Mr. Trump for the highest office in the land.

I think most people will look at Mr. Trump, as he is today, and will say, even granting that he shows signs of Alzheimer's Disease, as Tarpley asserts, or OCD as suggested by Tarpley and others, accompanied by Narcissistic Personality Disorder and even several other posited possible diagnoses, even, as I say, granting those possibilities, people would still vote for Mr. Trump.

Maybe such people believe that, like Ronald Reagan, who must, already, have had Alzheimer's Disease when he first ran for the the Presidency, Mr. Trump is competent enough, at this juncture, to give at least four years of service in the Oval Office without undue impairment of his ability to lead the nation.

If this line of speculation were to be employed politically as a weapon, against Mr. Trump, I think it would be more fruitful to select one of the hypothetical diagnoses and run with it, putting the others to the side. In fact, it might be more fruitful to concentrate on the symptoms of psychological disturbance in Mr. Trump and leave the diagnosis of illness to the side altogether.

If one can demonstrate that Mr. Trump can't hold a train of thought and can point to multiple situations where that has been the case, I think it is a more effective way to question his ability to fulfill the obligations of high office that to take a fork in the road labeled "rational analysis" and to try to nail down a syndrome out of the Diagnostic and Statistical Manual that fits Mr. Trump's behavior.

Throwing ten different syndrome's at Trump, as Webster Tarpley has done, smacks of desperation and is, I think, counterproductive.

Recently Webster Tarpley discussed what has been suggested is an elaborate tax dodge alleged to have been perpetrated by Mr. Trump in 2007 with the assistance of a figure alleged to be connected to mafia families in New York.

Details of this episode in Mr. Trump's life were reported in the The Telegraph in the UK.

Whether or not you believe that Mr. Trump was knowingly participating in a scheme to defraud the government of 50 million dollars of taxes owed to them, the fact is that Mr. Trump signed a document giving his "consent" to that arrangement, and has, in the opinion of some very reputable experts tainted himself, perhaps unknowingly, in what appears to be criminal activity.

"I cannot yet say if Trump has any legal responsibility,” Mr Oberlander said. "But as a citizen of the US, I worry about living under a president who could be so negligent, or perhaps even willfully blind."

Is Donald Trump a crook?

Who says, in public, "I could go out on the street and shoot somebody and still not lose supporters."?

Trump may be being more tactful now, but in the early part of the campaign he was talking like somebody who has an edge. Somebody who can insult people in public with impunity. Who can do that?

People in police forces will know what I am talking about.
edit on 28-5-2016 by ipsedixit because: (no reason given)

Webster Tarpley has questioned the value of Trump's doctor's endorsement. For one thing, the doctor said, in true Trump style, that Mr. Trump, if elected, would be the healthiest President ever. Tarpley, the historian, doesn't believe the doctor is qualified to make that statement.

His report also didn't mention Mr. Trump's alleged history of bone spurs, a condition he used to obtain a 4F draft exemption during the Vietnam War. Of course this led to his own "personal Vietnam" of dodging venereal disease at Studio 54 while others were fighting it out in the jungle, overseas, according to Mr. Trump himself.

Syphilis is one of the conditions Tarpley also speculates about, wrong headedly in my opinion.

Bottom line. The doctor's statement is suspected to be a puff piece.
edit on 28-5-2016 by ipsedixit because: (no reason given)

posted on May, 28 2016 @ 09:32 AM
link
Without any evidence, the puff piece is in Tapley's court regarding the serious health allegations and disproving a doctor's diagnosis. The minor and/or past health issues seems a desperate grasp at straws.

Mr. Trump's leadership and business traits do seem to be aggressive, but isn't that what the American economy needs right now for growth?

As for his personality traits, who better to ask than his wife, family and friends - those who actually know him.

posted on May, 28 2016 @ 09:39 AM
link
Tarpley may have a point, but look at politicians in general. Immoral, unprincipled, sociopathic degenerates for the most part.

posted on May, 28 2016 @ 09:40 AM
link
Trumps physical problems are that he doesn't have any guts; this is likely to affect his psychological problems as well.... He backed out of a debate with Bernie.

This little mistake will follow him for the rest of his campaign; to his detriment. Even his most ardent supporters won't tolerate this type of cowardice!

posted on May, 28 2016 @ 10:04 AM
link
I don't think Hillary Clinton can beat Donald Trump in an election. I think Trump will be the next President of the United States. Organized crime has been involved in government for generations, but a more recent development has been the embrace of criminality by ever increasing numbers of the general public. The tax haven scandal is an indication of that.

It just seems to me that as crooked as Hillary Clinton has been alleged to be, Donald Trump is perceptible degrees closer to being openly acknowledged by regulatory institutions as a "stand up" gangster.

The public seems to have an ever growing tolerance for criminality in public office. In the United States it is widely believed that good politicians are either hounded out of office or assassinated. It appears as if only a minority of American voters are scrupulous, ethical and law abiding citizens and that the majority of American voters are as unscrupulous as their leaders, hence the growing tolerance for people like the Clintons and the even more unsavory, in my opinion, Donald Trump.

One might caval about how to rate them on the criminality scale, but in the horse race to perdition, Hillary, Donald and the American public are all running neck and neck, in my opinion.

What are you on? Trump made a joke on Jimmy Kimmel about debating Sanders instead of Clinton, and the Sanders camp is so desperate they actually took it seriously and jumped on it like a dog with a bone. 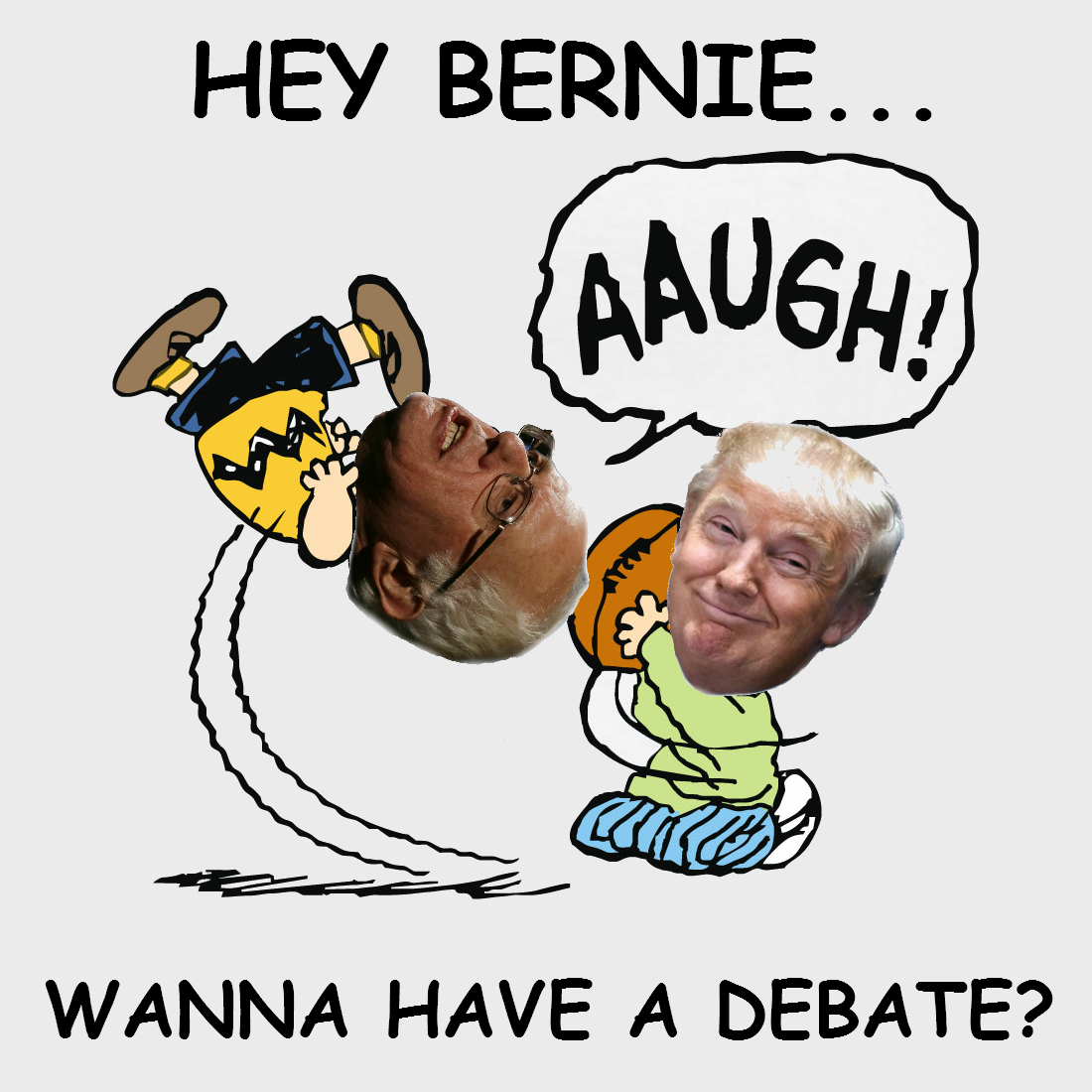