posted on May, 27 2016 @ 10:10 AM
link
I am not very familiar with the current happenings with Brexit or Prime Minister David Cameron, however I came across this photo and it piqued my interest.

Caption for the picture was

Now, as I mentioned I'm not informed as to the context of this or even many details about the Brexit or what "Tories" even are (I understand they are some sort of political affiliation).

I want to learn more and get some feedback as to what's going on in this picture.

Perhaps they were trying to show that this political presentation for this is totally staged and since they are posing for a picture in front of a bus, it may appear (or they may be trying to convince people) that they are traveling around from city to city to protest/recruit and are really not even using the bus or driving anywhere. Just a thought.

I would hazzard a guess a a photo shoot for publicity purposes .....

will be other pictures around with different towns and cities named, so

wrong? will put their X on *in*

I dont suppose there will be too many scrutinising the faces in the crowd!

I agree that it does look like they are in the same place (as the pavement is identical) and they have just moved positions and changed banners.

Anyway, Kent and Sussex are quite close, so chances are these people could have come from both counties. The only thing missing is a Surrey banner.

posted on May, 27 2016 @ 05:23 PM
link
Whilst there are about 12 individuals recognised in each picture, there about another 12 who don't show up in each picture. Which seems odd. Also in the first picture why is there a set of wheels showing under the banner. It's like a wheelchair but nobody in it. Weird 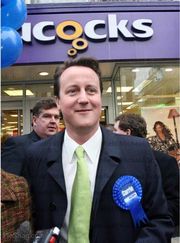 originally posted by: bigyin
Also in the first picture why is there a set of wheels showing under the banner. It's like a wheelchair but nobody in it. Weird

No, it is just a walker used by the woman with white tshirt and white hair.

Good observation with the wheels - in the 2nd picture it looks like there is actually a child with dark hair (perhaps an adult but looks like a child) in a wheelchair. Did they tell the kid to "duck" for the first picture so all we see are the wheels? Seems odd.. lol