Something a little odd flew over last night

posted on May, 27 2016 @ 09:26 AM
link
OK, I know the picture is pretty pitiful, but let me at least give you the back story.
My daughter came to visit, so there were three of us sitting out by the fire and watching the stars etc.. I happened to notice the bright orb(?) that at first I had thought was one of the brighter stars I had been looking at, was now moving toward us from the south.

Of course after realizing it wasn't the star, next thought was oh, just a plane. The thing is there were no blinking lights what so ever. Of course I commented on it, and as it flew over we all agreed, nope, no blinking lights. No green, nor red, nor anything.

I grabbed the camera which took less than a minute and now it had passed over us and changed direction. It was originally coming from the south and heading north. Now it had taken a northeast course.

If I were to guess, Id say it was flying about as high as a helicopter might. It wasn't moving oddly fast, nor slow.

We did get to see it from all angles. Coming toward, over, and away from us. I got the picture when it was moving away. Again, no blinking lights at all.

Now tell me, does this in anyway resemble a plane too you? Like I said, just another little orb shot and nothing exciting, except the facts that I have already explained.

I myself see no resemblance of a plane at all, then again this is just me. How about you?
This was taken in Okeechobee Florida around 9:30 or so 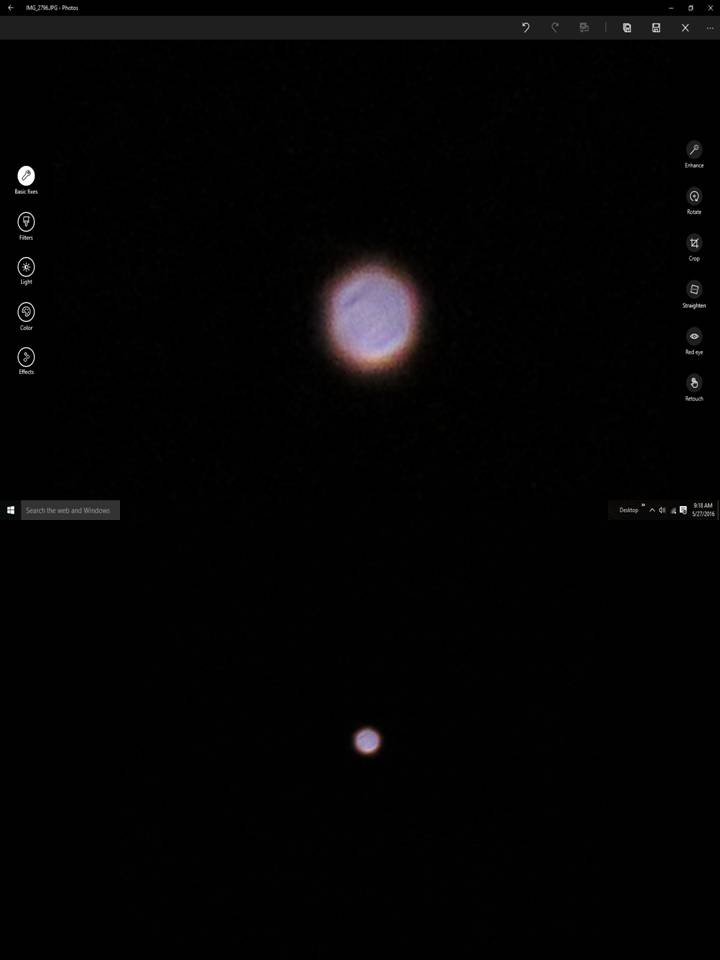 
I myself see no resemblance of a plane at all, then again this is just me. How about you?


The picture does nothing, it's zoomed so much making a blurred spot, so there is no way we in here can tell anything from the picture, meaning for us, it could be a plane as it could be a extraterrestrial mother ship .

Nice!! I have no idea what that can be...but you should file a report here ..and see if others saw something similar etc...


I mentioned right from the beginning I knew the pictures weren't really that great, but the bottom picture is the original. Does that look like a plane to you? I don't really see where the zoom really changed it all that much.

When you zoom, it become out of focus and creates a blurred spot, therefore there are no details what so ever in the picture, so asking us if we see any blinking lights or if it resemble a plane is kind of silly.

But, we still got your word for it to have no navigation light.

Here is a very good example of what i mean, notice it look exactly like your picture.


I mentioned right from the beginning I knew the pictures weren't really that great, but the bottom picture is the original. Does that look like a plane to you? I don't really see where the zoom really changed it all that much.


Good pictures OneHuman. The bottom pic shows a circular light, which represents what you saw from a distance; an unblinking orb. Again, this is a picture of circular shaped light, which is what you say you saw.

The enlarged picture is interesting because enlarged even further, it looks swirl like and faintly galaxyish.

Bright, round, glowing orb that produces no illumination of wings, windows, fuselage etc.?

Yeah, that has to be a plane.

Good job getting what you could for a picture. No idea what it is or isn't, but, is what the picture looks like pretty close to what it looked like to the naked eye? Not that it answers anything, just curious lol.

just what I was going to say...

the 'observation' that the point-of-light traveled S-to-N then corrected to going NE I think was a mental fudge with the eyewitness... One's Total Situational Awareness may have been skewed by looking overhead at 83° for an extended time

I seen objects in low orbit before, with the naked eye at night, but the point-of-light traveled N-S following the east coast coastline in my sighting...the S-to-N orbit is strange

Now tell me, does this in anyway resemble a plane too you?


Now watch me pull a rabbit from an ordinary top hat. As you can see (turns top hat), the hat is completely empty…

"Nothing in my hand, nothing up my sleeve…"

The point source in your pic is obviously blurred from zooming it. Did you get a shot of it before zooming?

We did get to see it from all angles. Coming toward, over, and away from us.

don't zoom in and I would assume you have multiple pictures...post them as is...I would like to see how far along it moves from stationary objects...other than than it looks like a planet...Mars has been at its brightest lately...

Yes, I think the ISS changing direction from the viewpoint of the observer was an optical illusion.

Also, don't forget that the ISS doesn't actually fly in a straight line

It does travel in the same direction, but when you apply a 3d path to a 2d flat map, it looks like a sine wave.

Good description, that's the way all reports should be at the very least.

Once you mention the apparent direction of travel along with the rest, it's pretty sure to be the ISS.
It'll be over us tonight after 1 AM.

When you disregard the rotation of Earth, yes, it flies in a straight path But with Earth's rotation in mind it draws the sine wave, not only because it's projected on 2D. Hence, not going through the same region on each rotation. Anyhow, exactly what you said.

posted on May, 27 2016 @ 11:58 AM
link
Ok, let me try to explain this again. My house faces due east more or less by a degree or two. This definitely came from the south and was heading north. The time it took me to grab the camera which is a cannon btw, not a phone camera, took less than a minute. In the short time is when it started slightly heading to the north east. It wasn't a huge change of direction, but just enough to notice.

I have seen the ISS before and this was way to low to have been that. There were other planes definitely higher at cruise altitude of long flights etc..

Here are a couple of the other pictures asked for. When I was doing the zoom I kept getting the bounce of light, so these are after I had zoomed out just so I had something at least.

To answer someone else's question, yes, it did look like the zoom, just a solid ball of white light. Like I said, at first I just thought it was one of the bright stars. Mars was still a lot more in the eastern sky. Its brightness was similar to Jupiter, but bigger and brighter. ( Its brightness is referring to the orb of light, not mars)

Again, way to low to have been the space station and lasted way too long. This sighting took about 7 minutes from noticing it to watching it pass out of sight. 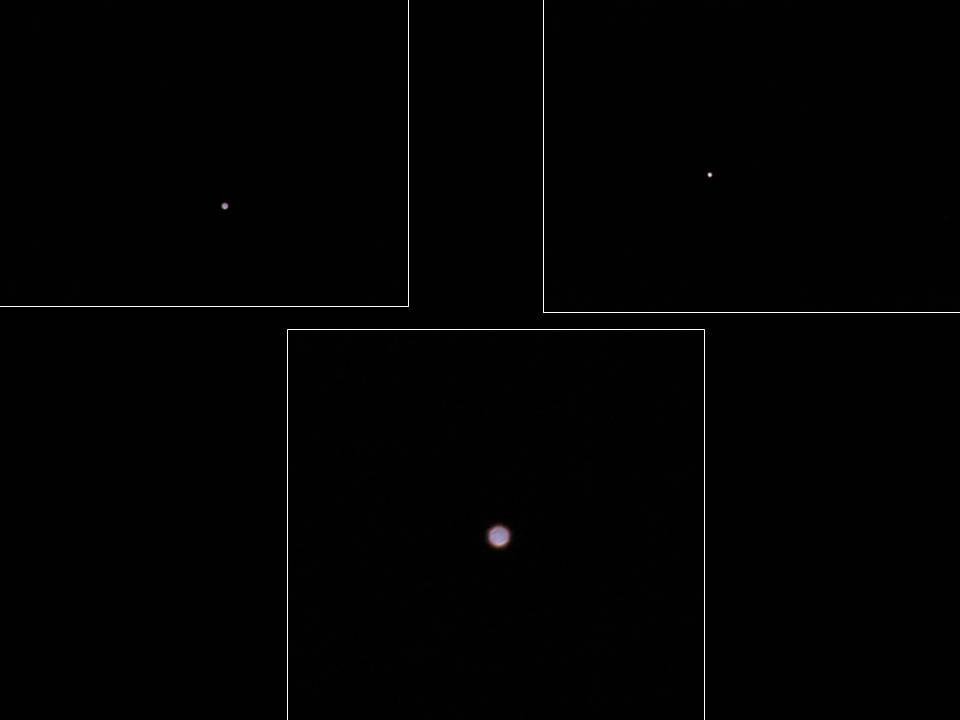 The ISS will be passing over you again tonight, from the South, and heading North at 8:34 PM local time.

It won't be nearly as bright as it was last night and will be lower on the horizon. Last night would have looked like a bright Venus passing almost directly overhead.

I gotta ask though... Did you not notice the ISS last night passing over you at nearly the exact same time of your ufo sighting? It would have looked like a bright planet with no blinking traveling from South to North and taking about 3.5 minutes to do so. (could 3.5 minutes maybe seem like 7 minutes?)