posted on May, 26 2016 @ 04:18 AM
link
The latest figures just released by the Office for National Statistics make grim reading for both the Tory party and the Remain campaign , despite Tory pledges to reduce the number of net migration to under 100,000 per year the net figure for last year now stands at 333,000 , up 20,000 from December 2014.
With pressure growing on housing , schools and health services and budgets continuing to be cut in the name of austerity the standard of living for UK citizens seems likely to continue to be squeezed.

As with any official statistics the true numbers are likely to be much higher , illegal immigration which isn't taken into account will surely add tens of thousands to the official figure and other sources point to numbers greater than the official estimate.


Figures published by the ONS earlier this month showed 1.2 million more EU migrants have got National Insurance numbers in the past five years than have shown up in the official immigration statistics - a discrepancy seized upon by critics of current immigration policy.
Speaking on Wednesday, Conservative MP and former shadow home secretary David Davis said EU migration had absorbed a million of the 2.5 million jobs created in the UK in the last five years. "Britain, not the EU, is the job creation machine," he said.
www.bbc.co.uk...

4 weeks today we get our chance to influence the direction of travel for our country , on this rare occasion your vote really does matter.

And yet our own unemployed are victimised and stigmatised.....there are only so many jobs to go around!!

However, I also believe this is just for show and the outcome is already decided....if only that was provable!


"Prime Minister after Prime Minister make promises on immigration that cannot be met because of the EU and this has deeply damaged faith in our democratic system."
He said: "The Prime Minister repeatedly promised that he would get a grip of this. The government told us that it would ‘keep our ambition of delivering annual net migration in the tens of thousands’.

"We were told that economic migrants from the EU would need to prove they had a job offer to come here - a pledge made by the Prime Minister, the Home Secretary and the Chancellor."

Britain must "face the fact that the system has spun out of control. We cannot control the numbers", he said.
www.telegraph.co.uk... 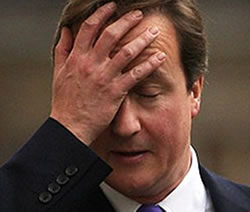 This isnt a short term matter. This is bigger than jobs and race issues.

What would an exit mean to Brits allies, economy, trade, militaristic strategies. Those to me are the bigger picture. Everything else can get sorted.
I dont think migration is the premier topic of discussion when it comes to this EU bullocks... i mean business.

posted on May, 26 2016 @ 05:21 AM
link
No Prime Minister is in a position to make any promises or allocate targets to immigration whilst we are a member of this club.

They can target immigration from outside of the E.U to a certain extent, but even that has been missed.


it would be interesting to see the breakdown of the ethnicity of those EU citizens that are emigrating to the U.K..

Living on the Canadian border on the U.S. side, there is a constant flow of immigrants to the U.S.. However, the vast majority of them are new citizens to Canada as well. Mostly Asian in origin.

I have no numbers, merely empirical evidence. What one would label 'old Canadians' aren't anywhere near matching the 'new Canadian' moves. As Canada has a far more favorable status immigrant-wise with the U.S., apparently a number of immigrants to Canada have as a motivation eventual immigration to the U.S..

Is it possible a similar situation exists within the E.U.?


What is staying going to do


Staying will preserve the status quo and lock us in to even more EU regulation , directives and rules.

what is leaving going to do


Leaving will gives us our sovereignty back , decisions that affect this country will be taken in our Parliament by our elected leaders , we will also stop throwing billions of pounds down the European drain , money that can be spent in the country it originated in.

What would an exit mean to Brits allies


Not much , we will still be a member of NATO.


Immigration and they way it's dealt with is a major topic of conversation in the UK and the wider European continent , the failure to deal with the crisis by the EU Parliament and the willingness to acquiesce by Frau Merkel and her friends has caused division throughout Europe.

Britain's exit will be a signal to other discontented countries that they too can leave the sinking ship before the project collapses .... which I believe it will.

Yes it does happen.

An example of this can be seen by the numbers of Somalis living in the U.K. The vast majority of these were initially given Dutch citizenship, as Somalia used to be a Dutch colony.

They got their passports and headed straight to the U.K as they were also classed as E.U citizens. I am not sure of the numbers involved, but the city I live in has the largest Somali community living outside of London.


Is it possible a similar situation exists within the E.U.?


Yes.
When Germany threw open her doors to the million plus "refugees" they opened the door to the whole of Europe , once the new arrivals are processed and get their permits they will be entitled to legally travel where they please within the Union.


Seems like another issue in the overall E.U. membership.

I, for one, see enough evidence that it's agenda driven and overall a negative...not unlike the U.S. federal gov't.

Sure there is a financial cost...interestingly, that cost is to the corporate strata....

originally posted by: gortex
a reply to: nwtrucker


Is it possible a similar situation exists within the E.U.?


Yes.
When Germany threw open her doors to the million plus "refugees" they opened the door to the whole of Europe , once the new arrivals are processed and get their permits they will be entitled to legally travel where they please within the Union.

That is the real issue and one I have failed to hear be mentioned on the TV. It never mattered where the immigrants and refugees settled, once they had an EU nationality they have freedom of movement. I'd like to add that the UK has a place (pr is it 2) place on the WTO, a founding member of the G5 and a member of NATO... Not to mention allainces outside of NATO such as the one with France in the Lancashire treaties.

It's like that song by Ed Sheeran. Everywhere you look EU participation has seemingly dragged us down a bit, take the Eurofighter for instance.

Personally I would have accepted huge re-negotiations and I'm guessing Europe would have too, especially the northern territories. An out vote will be watched closely, we really could see the downfall of the EU.


The Eurofighter has actually been a success, and those air forces that fly it are very pleased with it.

Those who are working tend to send the majority of the money they earn abroad to their families so taking it out of our economy.

originally posted by: Painterz
So what? The vast majority are working and paying more into the system than they take out, so we all benefit.

This is all true apart from the bit where you stated 'we all benefit'. You're probably speaking for yourself there.

The impact on immigration isn't just an economic case. There is a massive social and security case too.

The mass uncontrolled immigration we currently have is far too high to be sustainable.
Where are all these people going to live? How are all our schools, hospitals, roads, transport, energy, pollution, waste etc going to cope? We can't even house/feed the homeless who are already on the streets.

originally posted by: Painterz
a reply to: RAY1990


The Eurofighter has actually been a success, and those air forces that fly it are very pleased with it.


That's the perception of the EF on this side of the pond. Decent bang for the buck.

originally posted by: PhyllidaDavenport
a reply to: gortex

And yet our own unemployed are victimised and stigmatised.....there are only so many jobs to go around!!

However, I also believe this is just for show and the outcome is already decided....if only that was provable!


It is unfair. I've worked as a contractor in these deprived areas. The first thing is that there are so few jobs, that they are scattered throughout the entire city or region. You either need a car or use public transport. But public transport is completely unreliable. Your employer wants you in at 9am. There's a half hourly bus. The first one gets in at 8.15am. The next one gets in at 8.45am. Sometimes, the bus is late, breaks down, gets held up in traffic, so you have to take the earlier bus just to be safe. Either way, you end up standing around in the rain or freezing cold for at least half an hour. If you decide to buy a car, you can't afford to rent your own place, so you have to flat-share. Taxi fares are around £10/3 miles. Buses are about a third of that. If you are lucky, you can get a monthly pass for £60

Some councils seem totally anti public-transport. Where I'm living, they are actually removing bus stops along the high-street to "streamline" the service. Why????

originally posted by: gortex
a reply to: Painterz

Those who are working tend to send the majority of the money they earn abroad to their families so taking it out of our economy.