posted on May, 25 2016 @ 01:04 PM
link
If you go to the New York Times website and follow the links that eventually lead you to the Washington Post, you will learn details of a victory that dare not speak, in the New York Times, its name, that name being "landslide".

The first "results" page does not include Sanders' results. It's as if the Democratic caucuses in Washington did not exist:

Apparently, reading the fine print, the results of this vote are not binding, but still, not reporting the results as they stand at this moment, seems a little disinformational to me. This is what you see if you click another link to "more detailed" results. 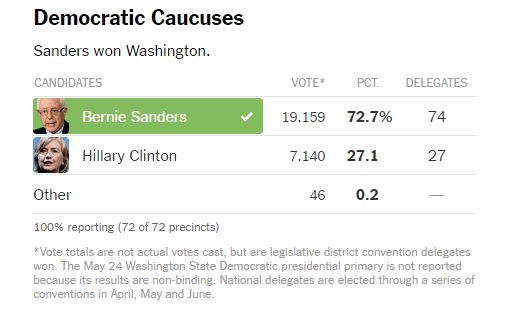 With Hillary Clinton's nomination a lead pipe to the cranium cinch at this point, maybe the Times just doesn't want to spoil her day by spreading news of another meaningless Sanders victory. Shouldn't the Times simply be telling the story, warts and all? I think so. Hillary is already suffering from the voter perception that she gets too much insider help in life and hey, Bernie won in Washington.

There's a link right at the top to the full election results.

posted on May, 25 2016 @ 01:12 PM
link
Perhaps because it is a non-event. Washington State has both a caucus system and a vote. Bernie won the Washington caucuses back in March. The popular vote does not count AT ALL because the Dems decided to use the caucus only. On the GOP side it DOES count, and Trump won easily. So since this took place in March, it's really old news.
edit on 5/25/2016 by schuyler because: (no reason given)

originally posted by: georgeglass
a reply to: ipsedixit

Lol. I used to work for CI overseas, there's a lot of fly sh#t in that pepper called news.

It seems like Hillary has quite a big backing in certain arms of the news media.

The vote total for Sanders was significantly higher that Clinton's total. It seems newsworthy to me. It suggests that Democrats may not rally around Hillary in the General Election. Her Democratic support might be softer than thought. They probably wouldn't rush to Trump but they might abstain from voting. Time will tell.

Note: Apologies. In the OP I said that the links led to the Washington Post, but it was to the complete Washington results in the NY Times. I do apologize. Things were buzzing around here when I started the thread, and I goofed up.
edit on 25-5-2016 by ipsedixit because: (no reason given)

Hillary had big money companies behind her the whole way, including media groups.
Bernie was about as grass roots as it gets in a National campaign.