So the whole Mexicans being rapist and murderers totally escaped your notice huh?


What he learned was astonishing. In 2013 and 2014 alone, ICE set loose more than 66,000 illegal immigrant criminals who had over 166,000 convictions (30,000 for drunk or drug driving, 414 kidnapping, over 11,000 rapes or other sexual assaults and 395 homicides). Already thousands of those have already been convicted of new crimes in the U.S., including felonies, since their release. Read more at www.wnd.com...


Based on our random sample, GAO estimates that the criminal aliens had an average of 7 arrests, 65 percent were arrested at least once for an immigration offense, and about 50 percent were arrested at least once for a drug offense. Immigration, drugs, and traffic violations accounted for about 50 percent of arrest offenses. About 90 percent of the criminal aliens sentenced in federal court in fiscal year 2009 (the most recently available data) were convicted of immigration and drug-related offenses. About 40 percent of individuals convicted as a result of DOJ terrorism-related investigations were aliens. 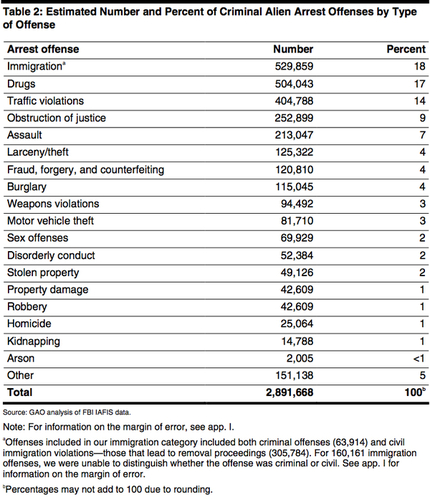 CNN article with misleading headline. It should be, "Anti-Trump Rioters smash doors, break through barriers".

IT's against ATS terms and conditions on what I woulda changed it to.

posted on May, 25 2016 @ 12:46 PM
link
Bernie Sanders had a sizable rally in Orange County yesterday. When Trump held a rally in the same area last month, the same thing happened as with this OP. Funny how Trump supporters didn't get all violent and shut it down. Does not surprise me one bit. This is Bernie Sanders' Red Revolution, imo.

Bernie Sanders' started the Progressive Caucus and it actually shared a website with Democratic Socialists of America at one time. DSA an affiliate of Socialist International. At that time they had a playlist of songs that represented their cause. It has long been scrubbed from their website and the Progressive Caucus has tried to separate itself from DSA at times but they still work closely together. With the help of the Wayback Machine, we get this www.dsausa.org..." target="_blank" class="postlink">List of DSA Songs

Here's a couple excerpts to get a feel of the mood of their cause.

When the Red Revolution
Brings Its Solution
Along, Along


Are You Sleeping, Bourgeoisie

Traditional American song, sung in rounds to the tune of "Frere Jacques".

Usually sung in rounds after "Are You Sleeping, Bourgeoisie". Sung to the tune of "Three Blind Mice".

And when the revolution comes,
We'll kill them all with knives and guns,
Bourgeoisie, Bourgeoisie

They scrubbed that from their site when it was exposed by media. It is my opinion they go more underground when exposed but their end goal is worldwide Marxism. I think we may be seeing Bernie's Red Revolution, which will eventually get bloody. I hope I am wrong.

EDIT:
The link is broken. If you care to confirm, go to the Way back machine Here

originally posted by: BatheInTheFountain
And we have people jumping on cars waving Mexican flags.

Yep, there it is.

secure the border, round up future illegals and criminals deport them and give them hard labor if caught here again, offer amnesty to the hard working law abiding illegals w a five year period of no criminal offenses and pay a tax for those 5 years.

posted on May, 25 2016 @ 01:47 PM
link
a reply to: conspiracy nut
No, because the right would then have to misinterpret his actions as him saying all Mexicans are rapists and drug dealers. Then how would the Bern outs justify their illegal actions at Trump rallies?

posted on May, 25 2016 @ 02:02 PM
link
They're f*in nuts. These people who are bickering about politics actually believe either Trump or Clinton is going to help and improve their lives.
There's no hope for some people.

originally posted by: Swills
a reply to: BatheInTheFountain

Is it any surprise that the most hated presidential candidate in history who announced his run with hateful rhetoric against the Latino community is being protested in such a way down in NM? Trump invokes emotional responses, that's his strategy from day one. That's why people love him or hate him.

I really do wish people would stop resorting to violence when they're protesting because it destroys their message and they're seen as thugs. Mob mentality is a dangerous thing indeed!

Don't pretend Trump supporters haven't been violent and act as if they and Trump are so innocent.


Lets see...Trump has said nothing about "Latinos" except for calling for the enforcement of US laws. In the process of enforcing the law, he proposes building a wall to keep illegals out of our country. He isn't advocating shooting them dead...which he could. So exactly what about that is HATE?

And...the discussion isn't about what Trump supporters have done. That isn't the topic. But you have to go to that because there is no excuse for these rioters causing damage, attacking other people, etc. But you believe they are justified.

That makes you part of the problem. You won't even ADMIT that they were totally in the wrong and you make EXCUSES for their actions. Your opinion therefore, has no value.

posted on May, 25 2016 @ 02:45 PM
link
PS: I hated Obama (and still do) much more than Trump. So to me, Trump is absolutely not the most hated. And if you don't count people who hate him that believe in law & order...you may find your statement incorrect.

Agent provocateurs are nothing new.

Open your eyes, shake of the yoke of us vs. them, liberals vs. conservatives.

posted on May, 25 2016 @ 03:34 PM
link
How is it that they only arrested one of those violent vermin? I mean there were crowds of them throwing rocks, jumping on cop cars and attempting to break and enter. That is the problem here, Law enforcement has allowed the mental disease called liberalism to clip their balls. They need to round these violent criminals up and set an example. ~$heopleNation

Couldn't someone waving around a Mexican flag get called an Americanphobe ?

originally posted by: SheopleNation
How is it that they only arrested one of those violent vermin? I mean there were crowds of them throwing rocks, jumping on cop cars and attempting to break and enter. That is the problem here, Law enforcement has allowed the mental disease called liberalism to clip their balls. They need to round these violent criminals up and set an example. ~$heopleNation

I believe they are being ordered to stand down. At Milo's event last night the cops were called and did nothing. It is coming out they were told to do nothing!
Remember the Baltimore riots and the Mayor telling the police to stand down?
I don't know about you, but I am seeing a pattern.

Put yourself in the cops shoes. You k ow the incident is under a microscope, and the media is going to take the side of the rioters. You also have spent at least the past two years or more being called racists foaming at the mouth to kill any non white person. So you just hang back until it is absolutely necessary to get involved. Your bosses don't want an incident, so all that adds up to just do what you can to minimize damage and get home.

This happens at all of these riots. In a just world, anyone committing violence would have been arrested, and if they were here illegally they would have been deported. On the bright side for the offenders, their Mexican flags would be more appropriate if they were sent back home.

Oh without a doubt their being told to stand down. Policies such as that will only embolden the violent imbeciles to increase their criminal activity. ~$heopleNation

Yeah I hear you, believe me I understand their position, but these orders are coming from higher up. It's just frustrating to watch people break the law with no accountability whatsoever. ~$heopleNation

Free publicity to what they hate is right, these protesters are idiots.

Lol what if Trump was paying agitators for fake protests for just this reason? Doubtful though.