The guard (who identifies herself as a woman) escorts the man out.

The man calls police and the guard gets arrested for "simple assault".

But later authorities say this could be a hate crime.

A female security guard working at a Washington, D.C. grocery store was arrested Monday afternoon for physically escorting a man out of the women’s restroom after he refused to leave because he identifies as a woman.

The shopper — a young, African-American male who identified himself as Ebony Belcher to local news outlets — reportedly passed the security guard on his way into the women’s restroom at a Giant grocery store in Northeast D.C.

I bet that's the whole problem.

I wonder what his i.d. says?

Well, that's one way to spin it.

ware2010
+38 more
posted on May, 24 2016 @ 11:37 AM
link
a reply to: xuenchen
I will discriminate against sex change for the rest of my life, its un ethical, pathetic, and why don't they just make all the confused people go to the handicap restroom or make them a restroom that says "for the confused" and piss on Obama!

Hurr, hurr.
That's a good one.

Seriously, though, this issue could easily be resolved by creating single occupancy restrooms that do not specify who/what can use them. Our local Safeway grocery stores in Seattle use this method and it seems to be the only logical solution.
edit on 5242016 by seattlerat because: (no reason given)


I suppose that it will end up costing a lot of companies a lot of money to change existing facilities, however, this will be chump-change compared to expensive lawsuits/settlements that will surely ensue if something is not done immediately.
edit on 5242016 by seattlerat because: my spilling sugs

So it begins... it's only going to get worse from here.

I'm almost hesitant to even open up about my thoughts on this topic because people get so up in arms emotional whenever it comes up, but EVERYONE needs to learn to have mature conversations about this and not start blaming, pointing fingers, making enemies of each other.

Personally, based on what I've seen, the person doesn't even look like a man. Was the security guard doing their job? Did she know the person was "identifying" as a female, but biologically not a natural one? Lots of questions... 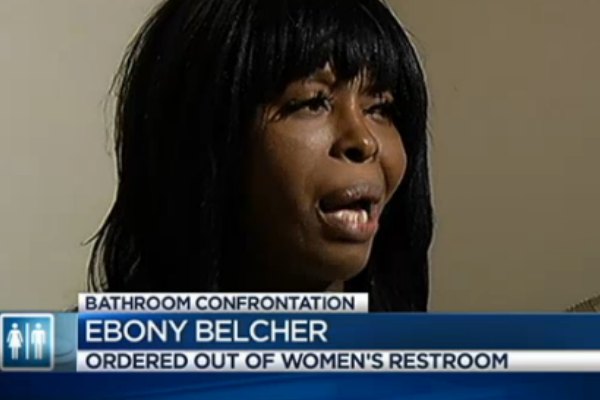 posted on May, 24 2016 @ 11:44 AM
link
If you identify and present as female, that is all that's required under employment law to use the women's room. Most businesses who adopt rules for public restrooms will follow the same concept.

Yea the article in the OP is clearly biased since all pictures of this person clearly show that she looks more feminine than masculine. Yet that article refers to Ebony as a man throughout it, but posts no pictures of her. Clearly it is trying to push an angle here.

originally posted by: ware2010
a reply to: xuenchen
I will discriminate against sex change for the rest of my life, its un ethical, pathetic, and why don't they just make all the confused people go to the handicap restroom or make them a restroom that says "for the confused" and piss on Obama!


I didn't think school had let out for summer vacation yet.

Transgendered people can decide which bathroom they want to use in DC. The security guard committed assault.

posted on May, 24 2016 @ 11:55 AM
link
I think I read this the other day and the person looked like a woman. The security guard knew that the person was transgender or transitioning.

posted on May, 24 2016 @ 11:58 AM
link
I was siding with the security guard until I saw ebony's picture. She could not walk into the men's room without causing a big scene. Geesh... Just let her pee, who cares?

I rarely discuss this issue because I think it is a non issue, for the most part. But two points... First, stores should have family bathrooms. Single bathrooms that include a changing table. If I'm out shopping with 3 young kids of both genders, it's easier and safer to stick together. A single bathroom could also be easier for a wheelchair to navigate and allow those who feel uncomfortable using a gender specific bathroom to use the family bathroom.

Second ... Every public women's room I've ever been in has private stalls with doors. So ... Nobody is seeing anyone's private parts anyway.
edit on 24-5-2016 by VegHead because: (no reason given)

I'm guessing that this person used the women's bathroom without any issue before this "gender" stuff started.

I think we should have bathroom cage matches and fight this one out, I'm ready to rumble let's do this #!