Mystery Object in Unusual Orbit Passes by Earth in 2017

page: 1
69
<<   2  3 >>
log in
join
share:
jeep3r
+46 more
posted on May, 22 2016 @ 03:21 PM
link
A 25-year-old space mystery remains unsolved up to this day: it involves an unusual Near-Earth-Object, about 10 meters in size, displaying unusual brightness variations and moving on an almost Earth-like heliocentric orbit. The object, which was discovered in the early nineties and later dubbed 1991 VG, might have qualified for a normal asteroid if it wouldn't have been for astronomer Duncan Steel, who investigated the object and concluded the following in an essay published in 1995:

"The above [analysis] has been intended to provide prima facie evidence that 1991 VG is a candidate alien artifact. The alternative explanations - that it was a peculiar asteroid, or a man-made body - are both estimated to be unlikely, but require further investigation."

Visualization of 1991 VG's orbital path around the sun: 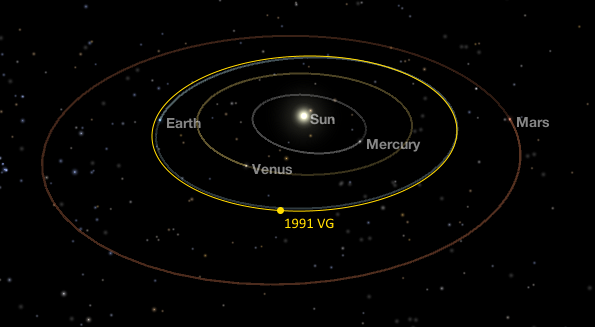 Four years earlier, astronomer James Vernon Scotti, discovered 1991 VG when it had its (almost) closest approach to Earth and came into view of the 0.91-m Spacewatch telescope in Arizona:

November 6, 1991 began as a relatively routine night for astronomer James Scotti. Working at the University of Arizona’s Kitt Peak observatory, Scotti was scanning the cosmos for asteroids when he discovered a small, fast moving object with highly unusual features. Only about 10 meters in diameter, the object exhibited an anomalous rate of rotation, fluctuations in brightness and speed for its size, suggesting to Scotti that it was something other than your “run-of-the-mill” main belt asteroid. Stranger still, the object was in a heliocentric orbit remarkably similar to that of Earth.

In his article, Duncan Steel considered a "returning spacecraft" (eg. Apollo, Pioneer, Luna, Venera etc.) to be the culprit for the anomalous behaviour of 1991 VG. He also looked into possible asteroids that could have been on the same trajectory, but both explanations have - more or less - been dismissed:

As far as I know, the debate is still up. But no matter whether 1991 VG is of human, natural or alien origin, I believe Duncan's essay achieved something more profound than to just investigate 1991 VG. He managed to make a case for the general possibility of ET technology having been deployed in our solar system in the remote past (and hinted at the fact that potential alien tech may still be around today just waiting to be discovered).

Over the past two decades various authors have debated whether the best place to look for such artifacts is in the asteroid belt, in the outer Solar System, on planetary surfaces, or as extra terrestrial probes in the inner Solar System, whereas the famous Fermi Paradox argument is based upon the understanding that such probes have not been detected, and thus extraterrestrial intelligent beings do not exist. The aim of this communication is to point out [...] that an extraterrestrial spaceprobe may have been detected in late 1991 in near-Earth space.

Undoubtedly, a lot of new near-Earth objects have been discovered since 1991 and many of us might be convinced that 1991 VG is nothing but an unusual asteroid, maybe the remains of a lunar impact or some kind of debris of a man-made object. However, I believe Duncan's theory hasn't been disproven yet. 1991 VG will fly past Earth again in Summer 2017, where it can be seen in the southern hemisphere.

Then, we will hopefully know what we're dealing with! 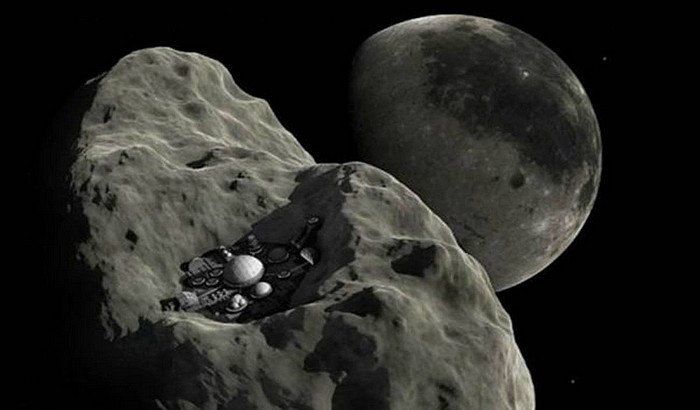 Note: I'm aware that there have been several threads about this topic before, but I thought it would be good to compile the information and sources into a new, more comprehensive OP (apart from this becoming relevant again due to the next pass of 1991 VG).

posted on May, 22 2016 @ 03:31 PM
link
Makes me wonder if it is a leftover from the supposed collision that gave us our moon. Maybe the variations are due to gravitational pull of planetary bodies that gives it an orbit that isn't... shall I say Newtonian?

I am no expert but I am not ready to write in "alien" in the blank yet. Every time we run across something new (though this appears to be approaching 2 decades of being known) we scramble to try and find plausible explanations. Until we get a closer look at this object then we may gain a better understanding of it.

We will just have to wait till 2017 when it gets close enough to give it a good observation.

Until then... just another "interesting object" we can speculate on.

I think the mystery regarding this object is that if it were simply a wandering rock in an orbit similar to the Earth, its orbit should have degraded or changed, as without some kind of artificial correction it couldn't remain where it is.

I am fairly certain it is that, but it has been ages since I read anything about this object, so I have a bit of reading up to do.

Nice reminder OP, thanks for this, oh and great job in the presentation!


I think the mystery regarding this object is that if it were simply a wandering rock in an orbit similar to the Earth, its orbit should have degraded or changed, as without some kind of artificial correction it couldn't remain where it is.

Wouldn't that apply to Earth's orbit too?

Again, I am going on (possibly false) memory here.

On November 6, 1991, Scotti discovered a faint object which was designated 1991 VG soon after discovery.[4] The object's heliocentric orbit was found to be very similar to Earth's orbit[5] and it was calculated that it would make a close approach to Earth just a month after discovery (on December 5, 1991[2]). Given such an Earth-like orbit, the dynamical lifetime of such an object is relatively short with the object quickly either impacting Earth or being perturbed by Earth onto a different orbit. The similarity of its orbit with Earth was also very difficult to explain from natural sources, with ejecta from a recent Lunar impact or non-gravitational perturbations such as the Yarkovsky effect having been suggested.[6] The first Earth Trojan asteroid - 2010 TK7 has been identified and such objects could well be a source for objects like 1991 VG.

Above from the wiki.

Bold is mine. Both bolded points are relevant, both for and against the "mystery"


So, the debate is still alive, and may continue to be so until someone can recover it next time it comes back around and then someday we can go out and take a close look. Does it have a regolith or a rocky surface or does it have "USA" or "CCCP" painted on the side? My guess is that it is indeed a natural object, but if it is manmade, perhaps it is a Saturn IVB stage from one of the early Apollo missions. As I recall, at least one left the 3rd stage in a high Earth orbit that would have eventually been perturbed into solar orbit.

I just would rather write "mundane explanation" first before alien. I love science because once one question is answered, two (or more) tend to arise.

I mean I would absolutely love if it were some sort of alien tech or outpost or something. But It isn't my go to answer when something is unexplained.

It is interesting though... and I am excited to see if something comes of this, mundane or not. We think we are so smart but in the scheme of things we are barely trying to figure out how not to poop in our diapers.

I can't put an argument there... if I suspend disbelief and go with "what if..." I could have a lot of fun with. Probably write a novella about this particular object.

"What if..." is a two edged sword. I mean it could be something wonderful which grows our knowledge and understanding. But I also bet that "what if..." can also be put in the list of "famous last words".

[...]fluctuations in brightness and speed for its size

That part sparks my curiosity.

Fluctuating brightness could be explained by rotation. What would account for fluctuating speed and what does he mean by 'fluctuating?' Is the speed a fact based on a snapshot or from long observation.

These are just initial thoughts and questions.

originally posted by: Terminal1
a reply to: Jonjonj
"What if..." is a two edged sword. I mean it could be something wonderful which grows our knowledge and understanding. But I also bet that "what if..." can also be put in the list of "famous last words".


You mean something like: What if we just ignore those darned alien thingies?

That part sparks my curiosity.

Fluctuating brightness could be explained by rotation. What would account for fluctuating speed and what does he mean by 'fluctuating?' Is the speed a fact based on a snapshot or from long observation.

These are just initial thoughts and questions.


First off, thanks to all who have replied to this thread so far, that's really appreciated!

I'm sure there are more than a handful of people on here that might shed some light on 1991 VG based on their interest and experience in astronomy-related subjects. As for myself, I think there's not a whole lot I'll be able to add but I think the discovery is quite intriguing, hence the thread.

As for the rotation, here's an excerpt from one of the sources from the OP:

Yet according to Scotti, in the years since he spotted 1991 VG, it was discovered that a significant portion of asteroids under 100 meters have remarkably fast rotation periods. Thus for an object as small as 1991 VG, a rotation period of a few minutes, while rare, is not impossible. It would simply mean that the object is a monolithic structure, a small boulder, rather than a rubble pile.


The above doesn't address the brightness variations, though. But it's obviously the combined observations that made Duncan doubt that this is a natural or man-made object.
edit on 22-5-2016 by jeep3r because: text

Does an image of this exist?

I am not sure where the quote of "fluctuations in brightness and speed" comes from really.

Could it be a misinterpretation of the term velocity?

I know velocity can mean both speed and direction, which might make sense.

All orbits speed up and slow down. I am fully unaware of any perfect orbit that maintains its speed at a constant value.

posted on May, 22 2016 @ 05:48 PM
link
Yeah, this was one of the "Hmmm ... might be a real anomaly" for me. I hadn't registered the speed variations, which might be explained by gravity wells catching and accelerating it, though I'd think that would be the first thing explored?

I remember someone matched the reflective qualities to the white titanium in Apollo era spacecraft (if the same object I'm remembering) ... but as I don't do spectra-analysis I cannot know for sure, and who's to say it isn't an artifact from some high tech 'olden days' or that aliens find white titanium handy, too?

Though really, anything truly alien has a much higher % chance of being totally incomprehensible-unidentifiable to us humans!

Loving your thread.👍🏽 I have nothing to add!

Very interesting, never heard of it before, and well done on a very nicely put together OP! Will be following this, and continuing on to reading the replies. Thanks for the work & for sharing!