Would Trump disclose information about UFOs and extra-terrestrials? [Poll]

posted on May, 22 2016 @ 09:36 AM
link
Reasons as to why he might:
-He feels connected to the American people and feels obliged to share the truth.
-He knows the truth will come out eventually and cannot face being faced as a deceiver some day.

Reasons as to he wouldn't:
-He doesn't feel connected to the American people enough
-And therefor doesn't mind lying to keep a smooth presidential ride instead of turmoil.
-He prefers to be 'the big leader', the 'smartest and most powerful man', and when an advanced alien presence would be revealed he feels as if it would threaten his ego.

As for the people who say that a President has no need to know basis and 'couldn't find out the truth' or cause disclosure:

Anyone who takes some time to research the phenomena can get to know the truth, if one isn't too blinded by cultural bias.
And especially the POTUS can easily get to know way more than the American public.

Also, no deep access is needed to cause disclosure, the President of the United States could simply go on television and say:
"Given the evidence we have, I think it is highly probable we are being visited by extra-terrestrial beings."

He will say the same thing Clinton, Carter and the othesr said. He will say he can't disclose because there is nothing to disclose.

He can't even disclose what the thing on top of his head is. 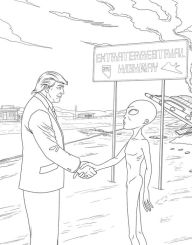 posted on May, 22 2016 @ 10:28 AM
link
I was curious to know if he is elected, would he or any other candidate for that matter be automatically given top secret clearance?

originally posted by: Benevolent Heretic
And he will say there's nothing to disclose, because that's what he will be told to say. He'll do and say what the GOP elite tell him to do and say.

That assumes that there is something to disclose doesn't it? It's a piss poor argument that if someone doesn't tell you what you (hypothetical you, not you personally) want to hear, they must be keeping it a secret from you.

POTUS has Level 17 TSC. I understand there are 38 Levels of Top Secret Clearance.

Reason Trump won't reveal anything new if he gets elected: He doesn't really know anything....

Reason Trump would even be elected: Because the american public is kinda clueless....

Why do you insist with this? First Hillary promises, and now this. The whole extraterrestrial presence is keep as an above top secret matter, I don't even believe it's shared with the presidents at all, maybe some sumarized ideas are given if he asks and that's all.

Considering the agenda of some of these beings, revealing anything to the public could risk massive chaos, it would be catastrophic.

originally posted by: uncommitted
That assumes that there is something to disclose doesn't it?

No. Regardless whether there's something to disclose or not, he'll do and say what the GOP tells him to.

It's a piss poor argument that if someone doesn't tell you what you (hypothetical you, not you personally) want to hear, they must be keeping it a secret from you.

I agree. That wasn't my point at all.

posted on May, 22 2016 @ 11:10 AM
link
Trump would disclose if he can make money off the disclosure or feel he has something to gain; like a Nobel prize. Looks like he wants more than money at this point in his life-from this point on he is concerned with his legacy (ego driven.)


Currently at 8-2 probably not winning, which is my vote. I think whatever the UFO phenomenon is, any president or otherwise who has come across even a part of the truth either understands why the info can't be widely disseminated, or selfishly agrees to be part of the lucky few by keeping their mouths shut.

originally posted by: Brotherman
What do you think there is to disclose?

A lot of truth in that question.

If you can successfully bluff at the poker table, you can run the whole game.

There are no levels. The "chart" that was pulled from took project names and turned them in to "levels." Majestic/Majic was the project name the majestic 12 were involved in.

Nobody with a clearance has numbers after their clearance unless it's part of the project they're cleared for. Nobody with a "majestic clearance" can walk in to a SCIF and demand access to whatever happens to be in that SCIF, including the president.

posted on May, 22 2016 @ 11:22 AM
link
Trump's not beholden to financial backers.Nor do I believe he'd be afraid to disclose.Question is would he be given access by whomever is in possession of such evidence?

originally posted by: Brotherman
What do you think there is to disclose?

- The presence if technological advanced alien beings operating on Earth.
- Hybridization agenda, abducting human beings against their will.
- Infiltration using human-looking hybrid beings, that are capable of mind control.