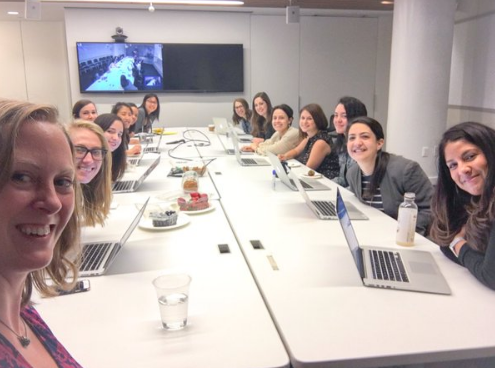 The photo, which showed a table full of mostly white women, was evidently meant to show workplace diversity.

But Heron might not have thought things through, as there was an immediate backlash to the lack of males or people of color on the Huffington Post editorial staff.

It's diverse because it's all women! You really should read some of the Twitter comments, some were pretty funny.

I'm sort of amazed anyone thought it would be a good idea to share this picture. Even if they had a smattering of color people would complain (especially their user base) that there were too many white people.

The ones on the right pee in the Men's room.

I think WAY in the back on the left there may be an Asian, a black person and possibly another Asian so I suppose I stand corrected...

So they stick the Asians in the back?

Reminds me of what Rosa Parks made a stand against.

posted on May, 21 2016 @ 09:53 PM
link
Interestingly, hasn't the Huffington Post complained numerous times about the male vs female wage gap?

I see their solution is to not hire or employ men at all based on that photo.

Agreed - it's not diversity until I see dwarfs, people that marry inanimate objects, at least one crazy cat lady with a shopping trolley, robots, blow-up partners, that dude that eats planes and bikes and the bloke that has more holes in his face than a sieve?

originally posted by: MysticPearl
a reply to: Domo1

So they stick the Asians in the back?

Reminds me of what Rosa Parks made a stand against.


Don't do that. Please. We're supposed to deny ignorance, not propagate it.

As far as the Huffington Post editorial staff, white women are considered a 'minority' in America, so the case could be made either way. I commend Huffington Post for giving its women some shine but this is not an example of diversity.

Look at advertising for example. Just so someone doesn't lose their minds, they have to include one White, one Black, one Hispanic and one Asian. If there isn't one of each, some idiot claims the company is discriminatory.

So what, a bunch of white women, boo hoo.

You would have to prove how many other sexes and different ethnic groups have applied and been turned down to insinuate any sort of discrimination has taken place.

The "black culture" has tons of television shows and movies where they exclude white people, but others don't call them out on it, because they're not the ones fighting to make sure there's an "acceptable" mix of different ethnic groups throughout the industry or workforce. Why do some feel threatened or offended by large groups of the same sex and/or ethnicity?

I see their solution is to not hire or employ men at all based on that photo.

If they hired men, they'd have to pay the guys more, 'cause they're women.

As a guy I wouldn't want to be in that room.

Even if they have a point, they've become such a joke - - I can't take it seriously.

I don't know for a fact what this picture is of. Will wait for further info.

Not a looker in the bunch or scared for other reasons?

This is a huge plank of present day Liberalism. The White Female "Matriarchy", of girls who barely look like they got out of college, dictating to the rest of the world about "Diversity".

Men, are not allowed at the table anymore unless they're gay or transgender. And even that is waning.


Will wait for further info.

Why don't you go look it up? Easier to just plug your ears and say BOO FOX! They tweeted it.

originally posted by: Domo1
a reply to: Grimpachi

Not a looker in the bunch or scared for other reasons?


Nothing good comes from being in a room full of women unless there is lots of alcohol.

I've got a group of chick friends. The magic number is indeed alcohol. Barring that no more than 3 or things get catty.