Here's the rotated screenshot of part of the video. 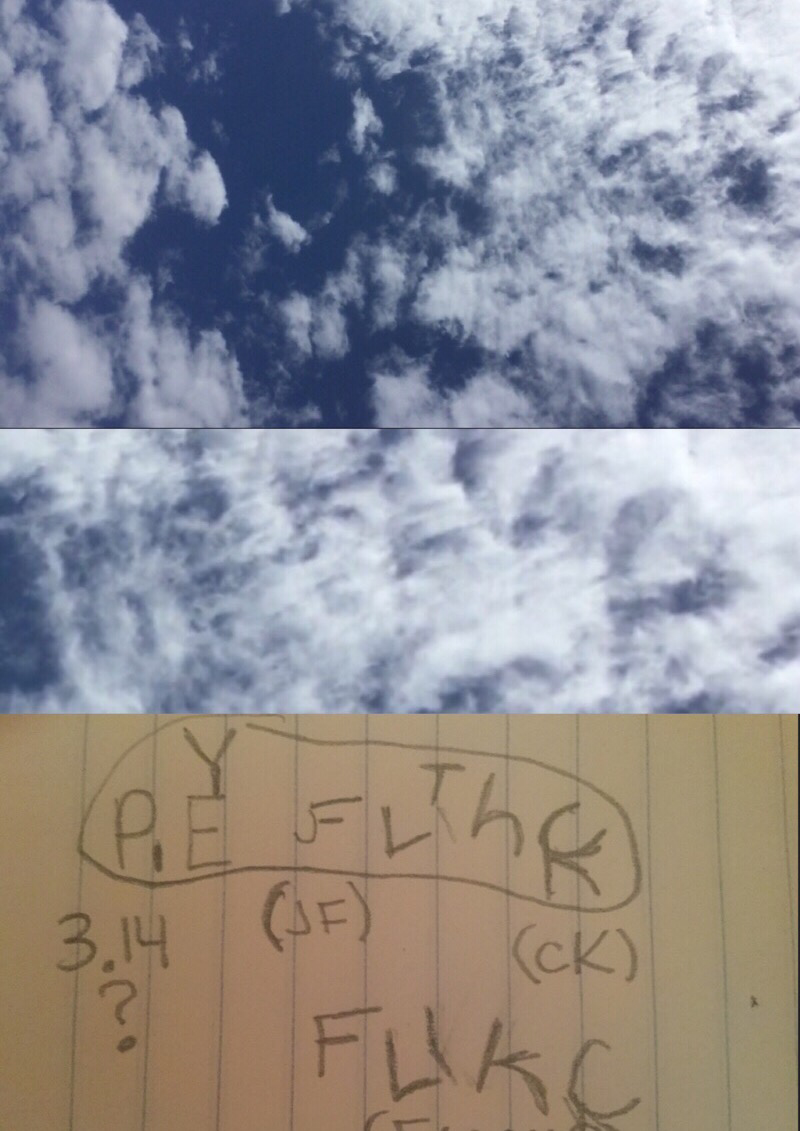 What's your take on this?

It looks real to me. What could cause several letters of the alphabet all in a row like that? How can that happen randomly?

I can't even begin to guess what the heck happened.

It's actually quite common, and quite fascinating, too - the brain attempts to find pattern in pure randomness, and sometimes it succeeds.

BTW I don't know what the screen shots are supposed to be, I see nothing there..
And what is the diagram with really bad handwriting supposed to mean?

I think this will prove to be a pie-in-the-sky vision as swanne has articulated.

That's not to say someone else won't see something. The human visual recognition algorithm works by pattern recognition. Any visual information, especially something as randomized as clouds, is compared to known visual patterns subconsciously. Faces, letters, animal shapes... any pattern which is well-known is used and it is very probable at least one such pattern will partially match. The brain fills in the rest.

What one is thinking about at the moment also has influence, since those patterns are already focused in the consciounessness.

It's how the brain manages to recognize shapes so fast. Some cutting-edge visual recognition technology uses a similar algorithm.

posted on May, 21 2016 @ 07:51 AM
link
a reply to: swanne
Yes sir. That is my one better hobby in life. Doing so makes me a blissfully peaceful person. Bathroom tile , curtain patterns , carpet. Good stuff.

originally posted by: 5StarOracle
What can cause this?
Some may say pareidolia...
I say imagination...

posted on May, 21 2016 @ 08:09 AM
link
Looks like half of the face of the demiurge Yahweh with pointed nose and curly mistache, pointing the index finger and fist at earth saying 'G FU'.

This entity really does want world war doesn't he.

Are we supposed to see something besides clouds? Didn't see any letters, myself.

Another video he made about it.

posted on May, 22 2016 @ 11:51 AM
link
It is possible to make the water vapor forming the clouds reform back into steam. I once set up a webcamera to make timelapse movies of the clouds from my apartment window. After taking several days worth of animations, I noticed that there was a diamond shaped "hole" in the clouds that moved in the opposite direction of the Sun. Checking a map, I found that this was most likely caused by reflection of sunlight from a large industrial greenhouse. The reflected light would be polarized.

I saw numbers in the clouds once too: