posted on May, 20 2016 @ 12:01 PM
link
Sorry I do not have a video of this incident yet, but this event happened yesterday (5-19-16) My brother and I were outside looking at some planes flying by as there were some crazy chem trails in the sky that morning. As we were hanging out I noticed what I thought to be a small bird at glance, but as I watched this thing I got the feeling that it was much bigger and much further away than I had first thought.
This thing was flying around like crazy, and would almost say it seemed to be meandering around but had a general direction it was flying. It was up at cloud level and I'm no expert but the thing was going fast. After just 30 seconds watching it, it was gone(had flown far into the clouds)
About 5 minutes later my brother looked back and said "There it is again!" .
This thing was just sitting completely still in the air around where I had first spotted it earlier. It was frozen for seconds then started flying off and froze again! Then just flew off again in the same curvy path. At this point I was for sure this was not a bird. I really wish I had a nice camera to record it but my brother used his iPhone. I will try to get the video today and post it here. Not too sure but maybe it can be looked at closely on a computer, my brother had mentioned he didn't know if he got in on video because it was so far away. But anyways if anyone knows if birds fly extremely high or can stop mid air for seconds at a time, also how fast can they fly? I am convinced this was a UFO but was wondering if anyone can shed some light or has seen or heard of anything similar happening.

About 30 minutes from Clarksville TN. Which is where Fort Cambell is, I see military aircraft like planes and helicopters fly over nearly every day.

Yes like that. It definitely looked more like an orb and not the bird. Although the one I saw was black and not white it definitely had a round shape to it.

Also we were watching planes because we had first noticed a chem trail and was watching how it was huge, below the clouds, and was drifting the opposite direction of the clouds as well. My brother took a video of that before we saw the black dot.

There is all sorts of videos on Youtube showing orbs around, and firing upon chem trails. The video I linked shows a black orb at the top of the page, and you can see far below, some sort of large bird - but the black orb is above that starting at the 2:18 time stamp...

I wish I'd've had a nice camera...would've been a perfect video

Could it have been a small drone ?
You mentioned video , any news on that ?

originally posted by: donktheclown
a reply to: OpenMindedPhilosopher
Like this one at 2:18?
Orb near Chemtrail

posted on May, 20 2016 @ 10:25 PM
link
The fact that you mention 'chemtrails' reeeealy makes me question your ability (or lack thereof) to identify any other mundane object(s) in the sky.

I'm so sorry I just got back from vacation (I created this thread on the drive to vacation) . I just had been to busy with family but I am seeing my brother tonight and will get that video from him.

Well good for you, I hope you feel better of yourself.

originally posted by: donktheclown
a reply to: OpenMindedPhilosopher
Like this one at 2:18?
Orb near Chemtrail

CRROW777 is an idiot plain and simple he doesn't look at his own videos closely enough for example from your link above here is a screen capture. 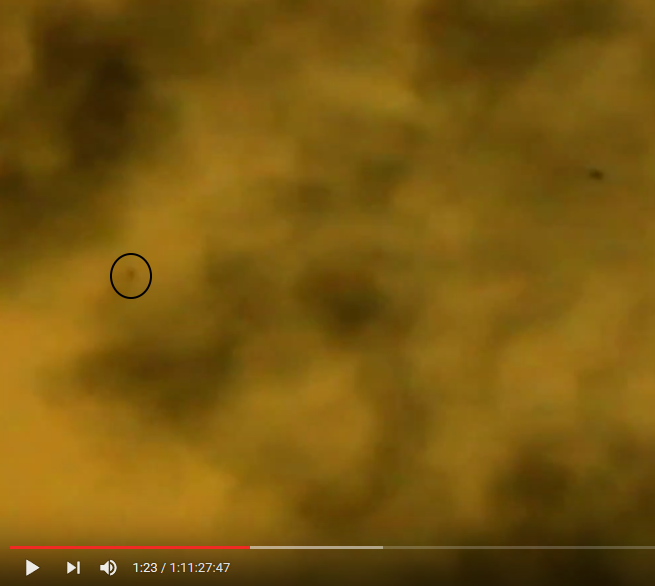 Inside the black circle you see a black dot you can see the time stamp on the idiots video watch from a few seconds before then and you will see it come into frame it flies across towards the other object due to lack of contrast it seems to vanish then it appears again that is the object crrow777 claims is being fired it's a couple of birds well below the contrail.
edit on 25-5-2016 by wmd_2008 because: (no reason given)