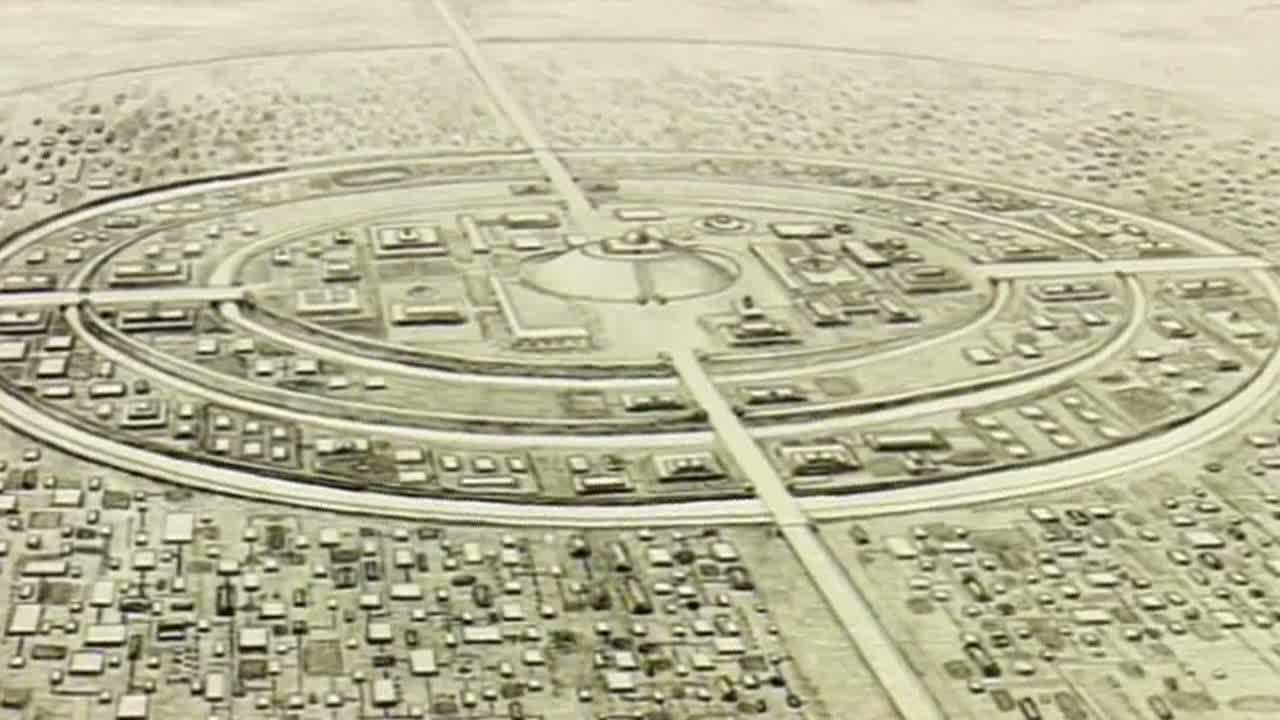 I was rereading Plato's Atlantis story and a thought occurred in my mind, What if the Island Plato describes was in actual fact a human breeding program setup to prefect the next generation of humans.

The Island itself was made from three rings so perfectly round as if they were turned on a Lathe. A natural Earth born woman called Cleito was selected from amongst Humans. She was placed in the central hub of the Island and mated with a "god" poseidon. Ten children were born who were to rule over the empire. They were the elect the Atlantean royal bloodline. Actually they were not humans fully but are what the ancients call demigods being half human (Cleito) and half god (Poseidon). We might call them hybrids but on a genetic level it would mean that if you were to trace their mitochondrial dna it would lead you back to Africa like all humans but unlike the rest of the humans on the planet if you were to trace their Y dna it would lead you back to one mysterious progenitor who did not evolve on this Earth.

To prevent genetic defects due to inbreeding amongst themselves these Atlantean demigods would have to introduce more human dna but not just any human would do only the most evolved would do, hence the reason for the circular island separating areas via water and quadrants. Essentially the humans would undergo physical and mental tests and the best would move inward. The very elect amongst them would make it to the inner ring where they could then compete amongst themselves. The winners would get to live on the central hub.

All those children born on that central hub could all trace their Y dna back to one individual who founded that civilisation.

In modern times those in power are pushing the lie that all humans are the same, this is complete rubbish. Most Olympic athletes are there due to genetics. Every physical aspect of your body has been decided by genetics, that is all your perfections and all your flaw's.This is nothing new to a farmer who selects stock to breed with. No race horse owner would breed his prize horse with a mule and expect a winner on the race course.

Not only physically but Scientists are increasingly discovering that intellect is largely hereditary also.

The powers that be do not promote this however because they actually prefer physically and mentally weak people because they are easier to control.

In the future when the powers have succeeded in turning the masses into mindless muttz I believe Atlantis will be rebuilt.

posted on May, 20 2016 @ 09:40 AM
link
Interesting idea. Would probably make for some decent sci-fi. In reality, however, there is absolutely no reason to suspect that Plato's tales of Atlantis were anything more than allegorical stories.

Edit: This would probably be much more at home in Skunk Works.
edit on 5/20/2016 by AdmireTheDistance because: (no reason given)

It would make for a good movie, cross between Gattaca ,hunger games and divergent I was thinking

posted on May, 20 2016 @ 09:52 AM
link
I'd have to agree with ATD, the story is nothing more than an allegory. Atlantis going under is the same kind of story as Noah's Ark, the world being flooded. It represents something other than what the literal interpretation gives us.


Well there is only one way to test that and that would be extracting genetic material from ancient royal bloodlines and checkout their Y dna inheritance for unusual commonality's.

Well if indeed the notion of Atlantis was a ancient human breeding program they certainly got something wrong given the current iteration of Humanity.

originally posted by: andy06shake
a reply to: zinc12

Well if indeed the notion of Atlantis was a ancient human breeding program they certainly got something wrong given the current iteration of Humanity.

Well the story of Atlantis represents the slip from the golden age, it does not deny there was a golden age but something happened to bring that age to an end. Perhaps they became too proud and caused their own downfall, perhaps the rest of the world was filled with envy and jealousy and mounted war against them, perhaps a cataclysm occurred which ended the civilization.

posted on May, 20 2016 @ 10:44 AM
link
Or maybe Santorini blew up and destroyed the rich trading city that existed there. Everything matches what Plato wrote.

Well something obviously happened and given the fact that history has a penchant for repetition i imagine whatever it was that did is once again in the post.

posted on May, 20 2016 @ 10:56 AM
link
Or perhaps people were corrupted by outside, broke with their traditions and the civilisation of Atlanta's Imploded from within.

posted on May, 20 2016 @ 11:08 AM
link
Humans have been selectively breeding since the beginning. Arranged marriages and slavery are two really good tools to breed people in whatever ways a society needs. Only recently in human history has the responsibility of mate selection fallen on women. Judge the results yourself.

originally posted by: schuyler
Everything matches what Plato wrote.


Really? Where does Plato mention anything specifically about a volcano? Earthquakes and floods, sure. Destruction from a wayward celestial body, yes. Seems like he might specifically mention a volcano.

The Atlantians were aliens that landed their massive ship at sea ( round island, easier structurally on the massive ship to float rather then land on land)in order to modify the mammals on our planet for slave labor. They combined different mammals that worked to varying degrees but the cross between primates and dolphins ( bread for underwater work) proved to be very difficult to control

One escaped then delivered a devastating blow to the ship that sank it. The ship still exists and parts of it still function but in the last ten thousand years the underwater mammals have evolved into mermaids and mermen that call the old ship home.

There is an animation of this out there somewhere. It's not very good.

originally posted by: Blue Shift
Only recently in human history has the responsibility of mate selection fallen on women. Judge the results yourself.

Was it creative writing ? in my day you would get your work stamped "F" for proposing that!

originally posted by: zinc12
a reply to: Mrgone

Was it creative writing ? in my day you would get your work stamped "F" for proposing that!

It was a final for producing a 3d animation for a bachelor's in digital animation... not history. I got an A-

The story wasn't as important as the execution... thank god you weren't my teacher since you aren't willing to grade on the project's parameters.

I was going to start my own thread but maybe its on topic here?

I have been reading books and gathering theories/ideas from the internet and this forum board actually and want to get some different view points. Currently I am reading Edgar Cayce on Atlantis. If what he says is true then he's seen some pretty impressive things in his meditative state. Most of it works with or complies with my own theory that I have in my head.

So the human race started on Atlantis some 10,500,000 years ago, before humans were perceived to even exist by science, Atlantis is still not proven, but we were not in human form, we were in thought form so to say, bubbles of thought that jumped to and fro to earthsuits that started as primordial soup and satisfied themselves and had fun and we could intermingle within these 2 forms. There were also odd human/animaloid creatues, giants, pygmies so this plays into the theory that mermaids may have once existed (I was told that I was a mermaid in a past life).

Anyways, we (thinking in Edgar Cayce terms...this was us) got used to the material life and lost the ability to go back to our thought bubble. We have in a sense made a hell on this earth and thus reincarnation and Karma was created.

Edgar Cayce was a Christian so I get sort of lost when he starts talking biblical but he also calls "God" the creative force and understands that his "GOD" is not the one and only that is just what he prefers to call him.

After we lost our thought forms, there were 2 (how I can only imagine it is gangs): Sons of Belial and Sons of the Law of One. The SOBs misused their creative powers that they gained from being projected into earth forms and the SotLoO realized what was going on and wanted to create a man to help the souls to go back and realize their Creator (Creative entity).

Anyone know anything of this? your views? At first I was like, WTF-ever, now I cant stop thinking about it and it makes me think of the movie Fantastic Planet
en.wikipedia.org...

Look out, zinc is rough on his creative writing grading

posted on May, 20 2016 @ 12:08 PM
link
Nah you didn't explain it was for creating an animation in which case your artistic capability's are the important thing

Well Atlantis is not as old as that because we are given its age by Plato. Secondly they were fully physical and Atlantis was also physical (even in the story).

But "the fall of man" as some call it involves the original man being somewhat angelic and falls due to sin into the world of matter. So basically we are all unconscious fallen angels however that would have happened way before Atlantis actually when the first primates became self-conscious.