Yes. It is by definition a criminal conspiracy.

Can We the People prosecute now?

Yeah, I thought that was weird too.

That's where Diebold comes in....

posted on May, 20 2016 @ 09:37 AM
link
a reply to: Sillyolme
Yes and no. Florida's voting machines were like hole punchers. When you press down on a hole punch, especially one that is dull due to age, you get those little circular pieces of paper dangling that you have to pull off. When ballots are then stacked together to be fed through a ballot reader, those hanging chads push back into the hole cut and the vote didn't register. That's why hand counting was critical. Seizing the ballots, driving them to DC and stopping the recount was the problem in Florida.

originally posted by: burgerbuddy
I watched the results coming in and bernie had her beat for a while until she jumped ahead with that 3000 vote clump.

Bernie was coming back to catch her.

I really thought bernie was gonna take it. 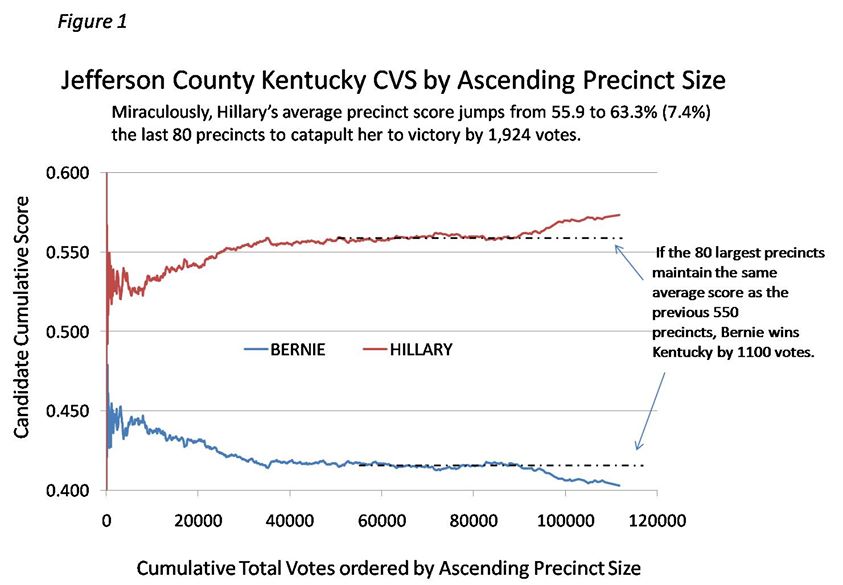 originally posted by: damwel
In 2000 in Ohio. A precinct turned in 2000 more votes for Bush then there were voters in that precinct and the republican sec of state didn't even investigate it.

I'm not going to mention the precincts in Philadelphia that had over 100% turnout with every vote for Obama.

posted on May, 20 2016 @ 10:46 AM
link
As per usual, the Hilary crowd does the drive by insult to our intelligence. So quickly do they forget the Bush "voter fraud". The same people who screamed for a recount then, totally dismiss Hilary's shenanigans.

posted on May, 20 2016 @ 12:51 PM
link
I read a story about Nevada, where a Democrat delegate and his wife tell first-hand how Bernie should have had more votes, but how the chairperson basically ignored the vocal majority.

So, doesn't really surprise me.

Would have seen the same thing in the RNC if the establishment had it's way and got more primaries switched to caucuses.

posted on May, 20 2016 @ 12:55 PM
link
Donald Trump is going to be a FUN President. He calls out DNC atrocities committed against Bernie..who's not even going to be his rival. Excellent!

I think this may be the story you are referring to:

I watched Hillary Clinton’s forces swipe Nevada: This is what the media’s not telling you
Bernie's forces were justifiably outraged over arbitrary rule changes and a chairwoman determined to ignore them

The true story is a little different than the MSM version.
edit on 20-5-2016 by AlaskanDad because: fixed a url problem, added B & I

posted on May, 20 2016 @ 12:59 PM
link
Kentucky's government is predominantly Democratic. Well, it was until this year. However the secretary of state and attorney general of Kentucky are still democrats. That should explain it all. Allison Grimes is a staunch Clinton supporter.

posted on May, 20 2016 @ 05:19 PM
link
I find it interesting that the "uncommitted" total wasn't listed in the graphic used in this story. I've not looked at the state totals but in the precinct where I worked (heavily Dem) the total was 9% for the uncommitted. Sanders won big in that precinct and county-wide.
I was surprised to hear several people express delight with the "uncommitted" choice with comments such as, "Hey, we finally got a "none of the above" category." Then of course, there was the one wag who said, "Uncommitted? Well, I've never been committed even though a lot of folks have told me I should be."
The really, really sad thing is the turnout. In a precinct with 642 voters, of which about 600 were eligible to vote, only 116 made the effort. It really ticks me off that the taxpayers must pay out thousands of dollars for the parties to hold their primaries. If a party wants to hold a primary, the party should be paying the tab.
It should be noted that Allison Grimes is under investigation (www.courier-journal.com...) for campaign finance law violations as is the Attorney General, son of the former governor due to admitted bribery and kickback activities by one of his appointees. www.kentucky.com... As usual, party politics in Kentucky resembles sausage-making---not something you want to view up close and personal. When "irregularities" are observed and reported the usual response goes like this, "We've always done it that way."

The delegate count was split evenly at 27 for Clinton 27 for Sanders.

And would be split the SAME way had Sanders 'won'.

Clinton and Sanders both picked up 27 delegates in Kentucky and one remaining delegate will be allocated in the sixth congressional district, which includes Frankfort and Lexington.

The delegate will be awarded based on final vote tallies and Clinton currently leads Sanders by a slim margin of about 500 votes in that district.

originally posted by: onequestion
Its funny when the Republican candidate is the one in the national spotlight calling out the dems especially when its for the only candidate who really stands a chance against him.


That's what's not so bad about Trump. He says what he means. Even if it doesn't exactly help him like a politician would want to only say the right things.

originally posted by: AlaskanDad
a reply to: neo96

Clinton and Sanders both picked up 27 delegates in Kentucky and one remaining delegate will be allocated in the sixth congressional district, which includes Frankfort and Lexington.

The delegate will be awarded based on final vote tallies and Clinton currently leads Sanders by a slim margin of about 500 votes in that district.

NPR mentioned this story today. However they went to great lengths to stress how it wouldn't help Bernies outcome at all and how Hillary is a shoe in just like they've been doing before the nomination even started. I used to love NPR and PBS but this last 8 years and their failure to call a pot black (racist) has turned me away in disgust.

originally posted by: carewemust
Donald Trump is going to be a FUN President. He calls out DNC atrocities committed against Bernie..who's not even going to be his rival. Excellent!


I hope He gets in there and turns the IRS & FBI loose on all government officials. We need to know whom is corrupt and when We get to the bottom of it We can throw them into GITMO and turn them over to those Egyptian torturers that Bush loved using.

Torture is a war crime.

I'm all for executions, depending on how heinous their deeds, but torture is a no go under any circumstances.

posted on May, 25 2016 @ 06:01 AM
link
I am fairly sure that literally everyone but the supporters of Hillary Clinton know the DNC election is rigged, and even they're just denying it.