Are dreams from our own minds?

posted on May, 19 2016 @ 02:12 PM
link
This type of stuff has been happening often lately but I tried to convince myself it was just coincidence even though at the time they don't seem that way.

What's happening is that I will get bizarre dreams or ideas then the next day see something related to that dream.

For example, The other night part of my dream was about me and others trying to stop a bad guy. We hid in a mine or cave then they came in. When we grabbed him I noticed the top of his head wasn't completely attached. It separated along the hair line. We pried his head open then shoved a stick in his head to scramble his brains and kill him.

The next morning (yesterday) I was sitting outside on a table having a cigarette and I noticed the weeds, grass and a stick were arranged in a way to create a partial face with a stick in the head portion and a cig in the mouth. Kind of like nature magically arranged in a way to show the guy in my dream having a smoke with me.
I can't high light what I'm talking about to more easily show you because I'm on a hand held device but here's the picture. 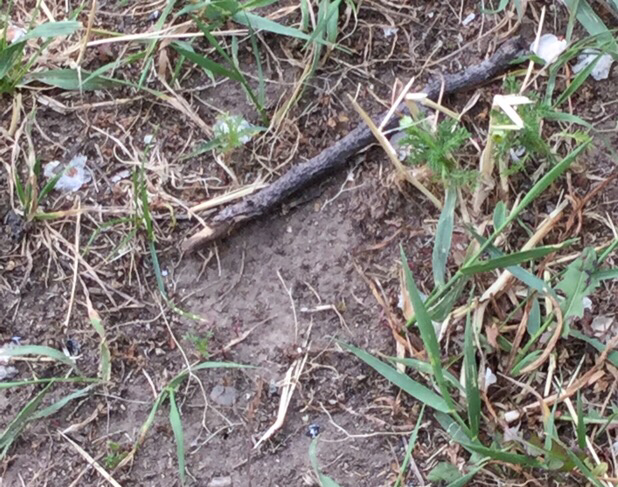 Also, A couple weeks ago I wrote about a dream/vision then a cloud formation occurred which was similar in an artistic way to what I wrote about. At least to me it seemed that way.

To me these types of scenarios create the idea that some of my dreams are somehow related to things I'll see in the future and that creates the idea that my mind isn't creating the dreams...

What if our dreams aren't created by our own minds and something is somehow giving us dreams?


is a type of illusion or misperception involving a vague or obscure stimulus being perceived as something clear and distinct.

As for whether or not dreams are "from" within our own mind, I personally believe we are a sort of "receiver" for the universe and things like dreams, the soul, etc. are from an original source. Perhaps our dreams are us experiencing a connection to the bigger/original source. Or maybe it's '___' and purely a chemical/mental thing.
edit on 19-5-2016 by FamCore because: (no reason given)

I think everything in our dreams is composed of stuff from our memories - images of people and places we've been or seen or imagined. In that sense, yes, our dreams are very much highly individualistic and very much all in our own mind.

However, I think our dreams have meaning too, and that sometimes, they are meant to send messages. Whether those messages are solely from our own deep subconscious or from outside influences, I don't know. But that part of our dreams, and I don't think those are common dreams, only the ones you remember clearly long after they're done, I think has the potential to be more than just inside your own mind.

Dreams can sometimes gain access to a spiritual knowledge base which contains all of the past, present and multiple future paths. This is how some dreams become reality the following day.

Dreams can also allow 2 or more sleepers to interact with each other from different sides of the planet in real time. These are however, very rare. It can be done if the dreamer focuses on a real room that the other person resides in just before falling asleep.

posted on May, 19 2016 @ 04:30 PM
link
I believe dreams originate from the retina (I once had a retinal blister, and the purple color I'd see with my eye closed would appear in my dreams). Perhaps all those retinal rods, cones and neurons act as a phased-array antennae? Considering that there are 100 million receptors in each eye, along with 6cm of optic nerves, that's more than enough tissue to receive the tiny electromagnetic signals given off by other brains.
edit on 19-5-2016 by stormcell because: (no reason given)

posted on May, 19 2016 @ 05:26 PM
link
Do you remember the dream God gave to the King of Egypt? I think fallen beings can also play around with us when we are in a dream state

I feel that when we dream we connect with others dreaming. Our sub conscious sends in signals or ideas but I also think other people's sub conscious also interact with mine.

Our mind is linked to the Universe in varying degrees.

So it's a little bit of both in the mind and from the world around us.

It goes two ways, what the mind conjures could manifest in reality and vice versa.