Dark Tower Author: Changes in the Film Might "Upset" Fans

The long-awaited film adaptation of Stephen King's fantasy classic The Dark Tower is finally in production. Earlier this week, on-set images of star Idris Elba were revealed, and now King himself has spoken about what fans can expect from the movie. 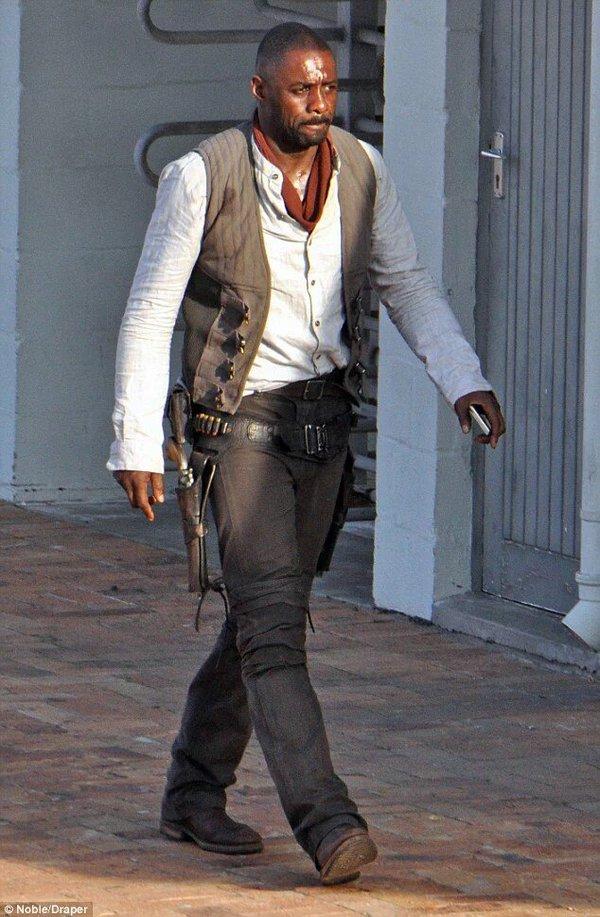 While the author does suggest that the book's famous opening lines will kick off the film, audiences should expect a few changes along the way. "I expect that the movie will start where the books start," he told the EW Podcast. "Y'know, 'The man in black fled across the desert, and the Gunslinger followed.' I think that nails it right in place for people. I've been pretty insistent on that, and I think everyone's onboard with it."

However, King went on to explain that from that point, the movie will deviate from the book. He stated: "It starts sort of in medias res, in the middle of the story, instead of at the beginning, which may upset some of the fans a little bit. But they will get behind it, because it is the story."

I gotta say I'm fine with the way the story goes as long as it's mostly true to the books. Casting Idris Elba as a Clint Eastwood based character is a bold move but I'm not really against it. He's a great actor and I think he's got the gravitas the Line of Eld has in the books.

The movie stars Elba as gunslinger Roland Deschain, while Matthew McConaughey will play Walter Padick, aka the Man in Black, the demonic sorcerer who is the story's central villain. It is directed by Nikolaj Arcel, who previously helmed the Oscar-nominated A Royal Affair.

The film is set to be released on February 23, 2017, and there are plans for this movie to be the first of an ongoing franchise.

McConaughey wouldn't have been my choice as the Man in Black, but I think he had a great dramatic role in Mud so he can probably pull him off.

In media res is Latin for the 'middle of the story'.

I do not like casting Idris Elba as Roland, I think McConaughey would have been better.

This would've worked much better on HBO/Showtime/Hulu as a series. Really think they missed a great opportunity here and robbed us all of a real adaptation of one of my favorite book series.

I honestly love Elba as an actor but think his selection here was guided more by 2016 politics than anything else. Steven King seems to love to let politics run his adaptations of shows (Anyone who watched Under the Dome all the way will be reminded of the tons of times characters didn't take guns with them when they clearly should have because the characters decided guns were too dangerous....give me a break Steve)

How will Roland interact with Odetta in any kind of interesting way when her main character trait throughout the first few books is that she hates Roland because she hates white people. Odetta's character growth throughout the books was one of my favorite parts and I don't see how that can exist when Roland is black.

Love Matthew M For Randall Flagg, I can already see him in jeans with a cowboy hat chilling in the Emerald Palace talking #, or giving the epic "size" speech at the end of The Gunslinger. It'll be just like a Lincoln cmmercial

I should've known, or at least looked it up first lol. Thanks for that info.

I think you're probably right about McConaughey. I wonder if that's going to affect Eddie Dean and/or Susannah's casting later down the line. Just looked up and found the IMDB cast list so far.

The Tirana, Arra Champignon, Dr. Hotchkiss, and Timmy characters I don't recognize and I just got done re-reading the whole series back to back a couple of months ago. Weird.

I totally agree with you. I love how HBO adapted the Game of Thrones and they should have done the same with the Dark Tower.

I just asked the Odetta-esk question last post, I wonder if it will affect the casting or relationships.

I know I'll watch it and will probably love it but fingers crossed anyways.

I do agree that this would have made a better series. They are going to lose so much of the story.

The ending or the "real" ending?

As long as the first one makes enough money that they'll approve the rest of the movies I think it might be ok. Otherwise, ya I agree, King's stories always have too much context/plot to lose in condensing them down into movies.

posted on May, 19 2016 @ 10:17 AM
link
I hope it's not the same situation as Game of Thrones, where the first 4 seasons closely followed the books, then they suddenly deviated in season 5 and now it's just become so predictable and mediocre in comparison.

posted on May, 19 2016 @ 10:22 AM
link
I'm not really excited about this. While I'm hoping it will be worthy of the title, it'll never be as good as it was in my mind while reading it. I've learned that books often are better in the mind than on the screen, so getting my hopes up is pointless.

The exception to that rule, for me, is Fear and Loathing in Las Vegas. I think watching that prior to reading it helped me fill in the gaps better.

Well the advantage here is that all of the story has already been written. I think HBO wanted to wait for Martin's books but scheduling and procrastination got the better of them. I could be wrong though.

Books are almost universally better than the movies made from them. I'm not quite sure why but it must be a difference in how people interpret what they read into mental visuals or something. Of course, if the Producer and/or Director have never read the book themselves then they could only do a mediocre job no matter what. I know condensing all that material into a 1.5 - 2 hour movie must be a hell of a tough job.

Re: Fear and Loathing, I've never read the book but the movie was and still is mind-blowing. I'll have to put the book on my ever-growing list.
edit on 5/19/16 by thov420 because: (no reason given)

posted on May, 19 2016 @ 10:48 AM
link
Mcconagay is one of two actors who ruin literally every movie they are affiliated with, the other being queen latifa.

MM as the man in black? Someone kill me.

Sorry to hear of your distaste for MM. Who would you like to have seen cast as the Man in Black? Any thoughts on Idris Elba or the other casting choices?

Argh... this saga is deserving of the Star Wars treatment, with at least nine movies to cover the whole thing. Smooshing them all together and starting in the middle is exactly what fans have been afraid of for years. I would almost rather see a network mini-series on it (ala Lost, Walking Dead, Game of Thrones, etc)

And the only problem I have with Idris Elba as Roland is that racism plays a pretty big role in the story with the introduction of Odetta/Susanna. She was vehemently racist towards both him and Eddie (justifiably so, given her past). I guess as long as Eddie is white, it might still make sense. It just doesn't make sense calling Idris Elba "gray meat" and "honky".

I am confident I will enjoy it but it's just that, if this is made and it's not perfect, then it was an opportunity blown that people have been waiting decades for.

For the record, the Dark Tower series is my all-time favorite series. When I was growing up, I fancied myself growing up into Rhea of the Coos. I'm only a young witch now but I'll get there.

You're out of your mind.

While Im not really excited about Elba as Roland, I would be irate if it was McConaughey.

originally posted by: watchitburn
You're out of your mind.

Just figured that out?

While Im not really excited about Elba as Roland, I would be irate if it was McConaughey.

At least he would be closer to the actual character. As pointed out above Roland needs to be white for several reasons. It was a dopey casting move which detracts from the plot. Maybe they can recast Spawn as some pasty Scandinavian for the new HBO series.

originally posted by: Skid Mark
a reply to: thov420
Poor choice for Roland. It doesn't make sense. I guess if they have Detta Walker in it they're going to cut out most of her rants, since "honky mofo" won't make sense; they'd have to, right?

You hit it on the head, Roland is white so its irrelevant how good an actor Idris is, he may not make a Roland that those of us who have read through the Dark Tower series envisaged. As you also say how is he going to interact with Odetta. that is a really important part of the story. Stephen King is going to have to work very hard to convince those who have read the series - his real fans because reading through that lot took quite some time and initially was hard work till you got into it. For those who have never read the books Idris will be a very good choice because he has the presence to carry this character.

I wholeheartedly agree about the Star Wars treatment. It would really take at least 9 movies to tell most of the story right, probably 12 or more to tell it properly "cover to cover", especially if you include "The Wind through the Keyhole" book.

I'm sure you will get there, as long as you have a pet snake and live in a shack out in the middle of BFE lol.

After thinking about it, the Dark Tower is one of the few series of books I have read all the way through, other than Douglas Adam's "Hitchhiker's Guide" series and I have Clarke's "2001-3001" series on my tablet waiting in the wings.