EgyptAir flight from Paris to Cairo has vanished from Radar

An informed source at EGYPTAIR stated that Flight no MS804,which departed Paris at 23:09 (CEST),heading to Cairo has disappeared from radar.

Cant say much, pray for those onboard. 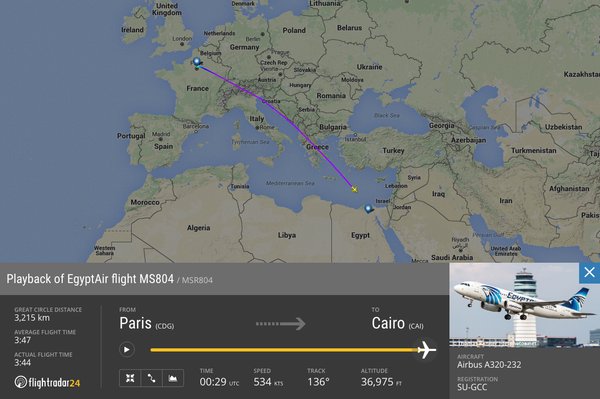 An EgyptAir flight carrying at least 59 passengers and 10 crew members went off the radar after departing from Paris and heading to Cairo, the airline said in a brief statement.


Source
Regards. In best hopes they are found and alright.

posted on May, 18 2016 @ 10:31 PM
link
Search and rescue teams are being gathered and prepared to look for wreckage or the aircraft. They are over two hours overdue at this point, according to the normal flight time.


CORRECTION...the flight was 3 hours and 40 minutes in flight when it went off the radar
edit on 18-5-2016 by research100 because: correction info

They've clarified it and said they were 10 miles inside Egypt airspace when they went missing.

thanks! I see they updated that on the live feed in my link. will correct my post up there! 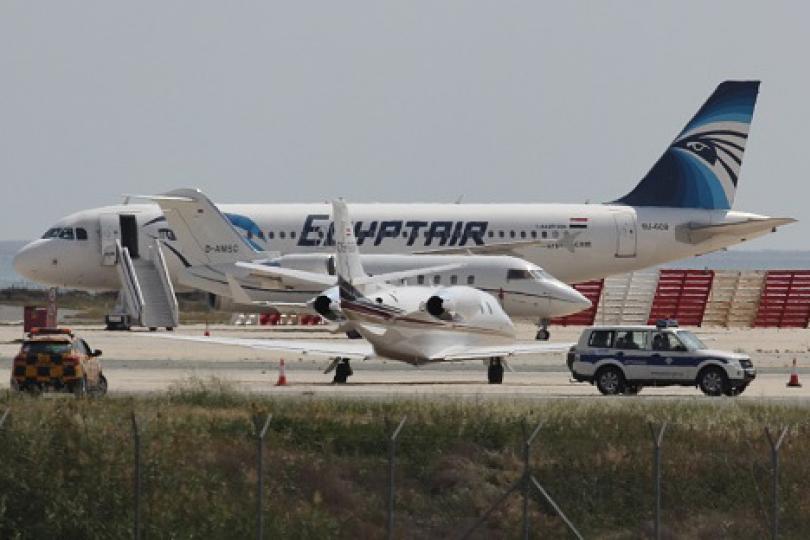 UPDATE: 11:30 p.m. EDT -- David Soucie, an industry expert quoted by CNN, said the aircraft was a recent model 737-800 that had a good reputation for safety, and that EgyptAir is generally considered a safe airline, although it has experienced its share of incidents.

The disappearance occurred near dawn, the report said.

According to aviation experts quoted on CNN, the flight took a route over the Alps and over Italy, and was headed across the Mediterranean Sea, bound for Egypt.

Mary Schiavo, an expert quoted by CNN, said that from the lack of information about the plane, One can logically assume there's trouble.

An Egypt Air Flight MS804, a Cairo-bound passenger jet that departed from Paris on Thursday morning local time, has gone off radar somewhere near Greece, according to the airline, as well as other posts on social media, including from Sky News Arabia.


It says there are 59 passengers and 10 crew members on board Flight MS804. The aircraft was flying at 37,000ft (11,300m) when it went missing over the eastern Mediterranean. An official said the plane lost contact with radar at 02:45 Cairo time (00:45 GMT). The company said it would issue an update "when more information becomes available"

Back in 2012 the 737's were having fuselage integrity issues.

Apparently it went down shortly after it crossed into Egyptian air space.

Since both designations were used I edited my post to add the 737's.

The Southwest that had the problem was one of several that the airline had skipped required inspections on, or hadn't done them properly. The FAA and Boeing sent out an AD to all operators requiring inspections of the fuselage in cracking prone areas.

I'm still reading the article, looks to be issues raised with the Aft Bulkhead, hard landings too, aside from the thinner fuselage?

All of this is great reading!


But the most alarming alert concerned involved a repeatedly troubled area called the aft pressure bulkhead (the rear portion of the cabin). In an Airworthiness Directive dated Nov. 5, 2001, the agency called for “immediate corrective action” to deal with a flaw in the aft pressure bulkhead, which acts like the cap on a bottle of soda and seals, under pressurization, the end of the tube that is the passenger cabin. Its integrity has to be second to none. Action had to be taken immediately, they said, because there was a risk that the airplane’s whole tailfin would tear away. Four airlines had discovered, during checks, that if a 737 made a hard landing, damaging the main landing gear, or simply a certain kind of hard landing that led to shimmying, involving violent swerves on the runway (not uncommon in turbulent weather), the forces transmitted from that impact would end up damaging the aft pressure bulkhead, fatally jeopardizing the tailfin.


All this underlined what Duggins had pointed out about fatigue testing that had not included the landing gear: It had been left to the four airlines to discover for themselves that the pressure bulkhead could crack if 737s made hard landings. (In a written memo to Newsweek, Boeing claimed that to say that there were “persistent problems” with the bulkhead is “not correct” but did not elaborate.)

Boing's response was predictable. From what I'm reading, provided it's not super-biased, is the 737 is based off a 1960's design and it has some issues.